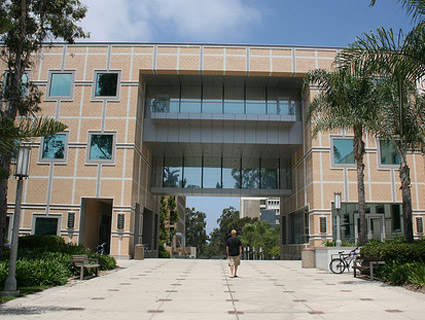 Heckling is nothing new; crowds in America have booed and otherwise interrupted speakers for centuries, whether they be international leaders, politicians, or even—as we saw last week—soldiers serving overseas. But the conviction of a group of students in a Southern California courtroom last week suggests that prosecutors will pursue some hecklers like criminals.

On Friday, a jury convicted 11 students from the University of California–Irvine and the University of California–Riverside of misdemeanor charges for disrupting a public meeting. The charges against the “Irvine 11” stemmed from their heckling of the Israeli Ambassador to the US during a speech in February 2010. After the verdict, an Orange County judge sentenced the students to three years probation and community service.

The conviction, which stirred up controversy nationwide, smacks of increased limits on free speech. Legal experts, however, are divided on the issue.

Throughout the trial, which lasted eight days, prosecutors alleged that the Irvine 11 conspired to “shut down” Oren’s speech, infringing on his First Amendment rights. “Free speech is not absolute. It does not include the right to suppress or cancel another person’s right to free speech. If it did, then no one would have the right to free speech,” Dan Wagner, an assistant district attorney for Orange County, argued during the trial. According to the OC Weekly, Wagner pointed to the 10 defendants (one student will have charges dropped after he completes community service), and said, “Who is the censor in this case? Right there—10 of them.” Predictably, the Irvine 11’s defense team also invoked the First Amendment, saying the students were simply utilizing their First Amendment right to protest. “Protest is messy, but it’s beautiful. This is how democracy survives,” Jacqueline Goodman, an attorney for the students, told the jury.

Civil rights groups were dismayed by Friday’s ruling. Hector Villagra, the executive director of the ACLU of Southern California, believes the conviction could have a chilling effect on freedom of speech for college students across California: “If allowed to stand, this will undoubtedly intimidate students in Orange County and across the state and discourage them from engaging in any controversial speech or protest for fear of criminal charges,” he told Mother Jones.

Villagra also worries that the content of the students’ speech may have been what attracted the district attorney’s attention. Similar cases in the region have not resulted in charges, which “raises the question whether the DA may have acted because of the students’ message, which would clearly violate the First Amendment,” Villagra says. “Even if protests on college campuses occasionally cross a line from protected speech into conduct, prosecutors cannot selectively intervene to punish students who say things they do not like.”

Indeed, last year an attorney for the Irvine 11 told Mother Jones that she had seen an internal OCDA email with the subject line: “UCI Muslim case.” Wagner, the Orange County assistant DA, claimed that was only “shorthand” for the students’ group involved, the Muslim Students Union.

UC Irvine objected to Friday’s ruling as well, telling the LA Times, “UC Irvine, which fully and actively supports the lawful expression of free speech, completed its disciplinary procedures in this matter last year and considered those sanctions sufficient [the UC Irvine Muslim Students Union was suspended]. We nurture a campus climate that promotes robust debate and welcomes different points of view.”

Last year, former Mother Jones intern Ashley Bates pointed out that a group of students at Brandeis University similarly protested a speech given by Israeli politician Avi Dichter and were not charged with disrupting a public meeting. Protesters at the University of Chicago also disrupted a speech by former Israeli Prime Minister Ehud Olmert in 2009, and were not charged.

Beyond the questions of freedom of speech, the actions of the Orange County DA’s office raise questions about its priorities. “The extraordinary resources required for the criminal prosecution and trial of these ten young men—including having the head of the district attorney’s homicide division leading the effort—would have been better used to fight crimes that endanger the residents of Orange County than to chill speech and discourage student activism,” Villagra says.