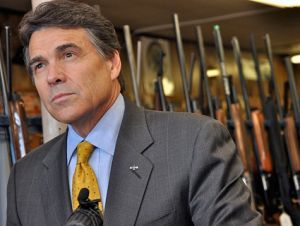 Texas Governor Rick Perry overhauled the Texas Forensic Science Commission in 2005 as it was on the verge of concluding that Cameron Todd Willingham's conviction was based on bad science.<a href="http://www.flickr.com/photos/rickperry/6005610000/sizes/z/in/photostream/">Rick Perry</a>/Flickr

Adam and I both wrote on Thursday about Texas Governor Rick Perry’s decision to go forward with the 2004 execution of Cameron Todd Willingham (in the face of evidence that called into question his guilt) and then kneecap the newly created state commission that seemed to be on the verge of blowing the lid off the whole thing. From a purely political standpoint, it speaks to Perry’s judgment and diligence, as well as his respect for scientific process; in this case, the arson science that had been used to convict Willingham for murdering his three kids had been refuted by the time his execution date rolled around.

But the Willingham decision didn’t just impact Cameron Todd Willingham; it actually set a precedent that will have a far-reaching effect. That’s because, in the process of overhauling the Texas Forensic Science Commission just as it was set to produce a report extremely damaging to his administration, he appointed a new chair: John Bradley, a district attorney whose record was so controversial he was later removed from the TFSC post by the Republican state senate. As the Texas Observer‘s Dave Mann explains, Bradley took the odd step—likely as a way of wasting time—of asking the state’s Republican attorney general to officially weigh in on whether the commission even had jurisdiction to evaluate cases that were decided before the commission was formed.

Given the circumstances by which it was conceived—given the stated goals of the legislators who drafted the law that created the commission—you might say that the entire point of the commission was to investigate cases that had already happened. But instead, the AG’s office, taking advantage of a loosely worded mission statement, ruled that the commission could only offer non-binding recommendations, and only on cases that came after 2005. Here’s Mann:

This afternoon, the commission considered new cases that involved flawed forensic evidence. It quickly became apparent how constricted the commission is following the recent opinion from the Texas attorney general’s office.

The commission rejected a half-dozen complaints, including three allegedly flawed arson cases, because they weren’t within its jurisdiction—at least as recently interpreted by the AG. The AG this summer ruled that the commission doesn’t have authority to investigate cases before 2005.

The three arson cases all occurred before then. So even though the cases apparently contained serious problems—and would otherwise have been investigated—the commission was forced to dismiss them because of “jurisdictional issues,” as Chair Nizam Peerwani put it.

This matters because, as he notes, there are a handful of arson cases, pre-2005, that were almost certainly based on bad science. Arson science changed dramatically over the last two decades; the process used to lock people up in the late 1990s is the forensic equivalent of alchemy.

Update: Yup, the TFSC met on Friday and affirmed that Abbot’s ruling prevents them from investigating pre-2005 cases. But via the Statesman, it’s not all bad:

The state fire marshal’s office has agreed to review prior arson investigations to determine if criminal convictions were obtained using bad science or now-debunked assumptions, it was announced Friday.

The review was a key concession sought by the Texas Forensic Science Commission as part of its investigation into the science used to convict, and ultimately execute, Cameron Todd Willingham for the 1991 fire that killed his three young daughters…

Uncomfortable that a poor understanding of fire science could have influenced other investigations, the commission’s Willingham report also urged Fire Marshal Paul Maldonado to review his agency’s files.