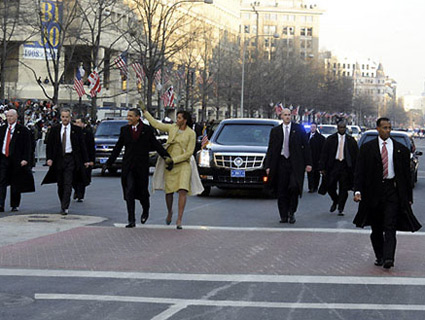 It’s like your mom always told you: eat your veggies, finish your homework, make your bed, and do not ever threaten to kill the president because it’s a Class D felony and you’ll go to jail.

But if you mask your vulgar (or fiercely racist) death threat as a simple suggestion or prediction, you might have some constitutional cover after all.

On Tuesday, a federal appeals court overturned the conviction of Walter Bagdasarian, a Southern California resident arrested over two years ago after posting a late-night tirade against Barack Obama in October 2008 (the law against threatening the president covers presidential candidates, too). According to court documents, Bagdasarian’s online comments include gems like “Obama fk the niggar, he will have a 50 cal in the head soon,” and “shoot the nig country fkd for another 4 years+, what nig has done ANYTHING right???? long term???? never in history, except sambos.”

The defendant claims to have been wasted when he wrote all that on a Yahoo message board at 1:00 in the morning. (As we all know, hard partying has a track record of causing people to suddenly become racists.)

Jail time for threatening the commander-in-chief is nothing new. This summer, a man was sentenced to twenty years in prison for mailing explicit death threats to Laura and George W. Bush, and birthers have been investigated by the Secret Service for questionable rhetoric. But a three-judge panel of the US 9th Circuit Court of Appeals deemed Bagdasarian’s web remarks were protected speech. The Los Angeles Times reports (emphasis my own):

The ruling noted that Bagdasarian did have in his possession .50-caliber weapons and ammunition but said the reference to a bullet in Obama’s head was “a prediction that conveyed no explicit or implicit threat on the part of Bagdasarian that he himself would kill or injure Obama.” …

The majority opinion written by [Judge Stephen] Reinhardt and joined by Chief Judge Alex Kozinski also said Bagdasarian’s call to “shoot” Obama wasn’t an offense under the statute used to convict him because the law doesn’t criminalize “predictions or exhortations to others to injure or kill the president.”

Judge Stephen Reinhardt, who wrote the majority opinion, “must have been absolutely convinced that no reasonable person could have acted on [the defendant’s] post as an endorsement,” Ralph Steinhardt, a law professor at George Washington University, tells Mother Jones. “But free speech has never extended to incitement to a crime, and the threat statute has always been taken very seriously by the Secret Service and the FBI,” Steinhardt says. “This guy Bagdasarian might have been a nobody, but so was Lee Harvey Oswald.”

The ruling basically puts Bagdasarian’s bigoted outburst on the same level as Rage Against the Machine frontman Zack de la Rocha’s 2007 statement that George W. Bush “should be hung, and tried, and shot, as any war criminal should be.” In both situations, arguing that an insane individual might have acted based on the offending speech wasn’t enough to build a winning case.

“Sometimes words precede actions and [hate speech] can encourage the weak-minded to do something violent,” Steinhardt says. “One would have thought that had someone actually acted on the basis of [Bagdasarian’s] posts, he could have been considered an accessory before the fact. [The prosecutor] could have attempted to show a causal link, but even then it would be a close call. For instance, there have been a lot of cases against recording artists whose fans would listen to their music and act it out, and most of the courts have ruled that the artist is not liable. It’s just a really tough argument to make.”