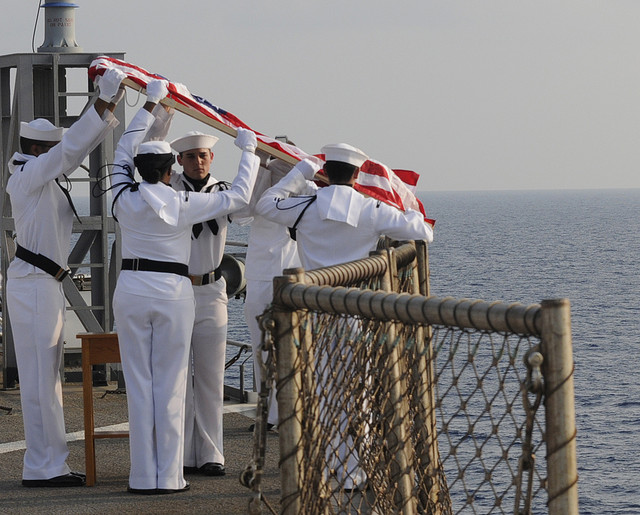 Now that Osama Bin Laden rests in the briny deep, reporters and citizens alike are asking good questions about the operation that dumped him there. Was it a kill mission? What happened to everyone else in the compound? And what was up with that sea burial, anyway?

Each of these questions fundamentally involves how Americans ought to act in combat, and as such, they deserve good answers—which haven’t been fully articulated by the White House or the military. Here’s some helpful background and some back-of-the-napkin reasoning on the mysteries of the Al Qaeda leader’s death:

1) Was this a “capture and kill” operation, or simply a killing mission? There’s conflicting evidence here. In briefing the American public, administration officials have remained adamant that Osama Bin Laden was to be captured if it was possible, but killed if it wasn’t. And strictly speaking, there are no explicit authorized “kill” missions in the military, because they could US law—specifically, Executive Order 12333, which forbids US officials from engaging in assassinations. But Tuesday, authorities acknowledged that OBL was unarmed when he was “double-tapped,” and an earlier Politico report from an anonymous military source states that the Navy SEALs cheered when told their mission was to kill bin Laden. And the White House had to walk back assertions that bin Laden had used a woman, possibly his wife, as a human shield. All of which circumstantially suggests that the “capture” plan wasn’t a primary concern.

Given the extreme political, strategic, and moral concerns that might have attended the capture and long-term detention of bin Laden, it would be understandable if the White House and the military desired to simply blot the terrorist organizer off the celestial orb. Understandable…but is it justifiable?

Even with documentary evidence, which is unlikely to be released publicly, determining whether the intent was to kill bin Laden would be difficult. Making the case that the killing was illegal would be even harder: First, the US regularly takes out alleged combatants with drone, jet, and ground strikes, and while the practice has been criticized by public opinion, it’s gone largely unchallenged in any court; in fact, as recently as last year, State Department legal advisers have argued that “targeted killing” of “unlawful combatants” is a legitimate act of war. Second, legality in America largely rests on moral foundations, and the moral wind in the US currently blows in the direction of “thank goodness he’s dead.” Right or wrong, that would set the bar awfully high for anyone who might argue that the architect of the 9/11 attacks didn’t get a fair shake.

Finally, there’s the fog of war: Premeditation would be hard to prove, because even the best-prepared, best-instructed commandos in the world aren’t reasonably expected to make ideal moral and legal decisions in a high-pressure moment. This should never be used as a rationalization to cover up damage that’s done (as it was here), or as a gloss for excesses and atrocities, but it should be taken into account when considering the aftermath of an operation like Sunday’s. Ask yourself whether, after fast-roping from a stalling helicopter into a darkened compound under small-arms fire in pursuit of the world’s most wanted man, you’d stop to consider the prudence of each of your options upon actually encountering that man. If an easy answer comes to your mind, you’re doing it wrong.

2) Who were all the women and children? Sources say the bin Laden compound was home to three large families: the terrorist’s, his courier’s and the courier’s brother’s. It’s unclear how many survivors were left behind by the SEALs on Sunday night—initial reports indicated 23 children and nine women, while a later Reuters report mentioned only bin Laden’s wife and about nine of his offspring. The official story is that the commandos intended to spirit the entourage away as prisoners. But the official story sounds kind of fishy.

Why would they US want those prisoners? Women and children in the bin Laden domicile were least likely to have actionable intelligence, and their detention and treatment could have become a focal point fer bin Laden sympathizers. Meanwhile, where do you put them? Do you charge them? Do you release them? Do you waterboard them? Any choice would have been a bad one. But leaving them to the Pakistani authorities for holding and questioning was win-win. They were left alive, obviously (one unidentified woman was killed in the firefight under as-yet unclear circumstances). They stood as a reminder to Pakistan and the world that, in harboring bin Laden, the South Asian nation had displayed stunning incompetence, or dubious loyalty, or both. And they handed the dilemma to Pakistan: observe appropriate human-rights practices in questioning and releasing the family of the world’s worst terrorist, or toss them in the hoosegow?

3) What was the deal with that burial at sea? Of course, there was the well-reported US desire not to make a shrine out of bin Laden’s grave. And don’t kid yourself: Interring Osama in the firmament wouldn’t have put any of those “he’s not dead” theories to rest. (Ask Tupac and Elvis.) But the US does sound a bit disingenuous when it says bin Laden was plopped in the Arabian sea to honor Islamic customs. And it’s not as if bin Laden was a mainstream Muslim in the first place (in any case, we’d hardly want to paint him as such). So what were American officials thinking?

They were thinking about making Osama even more irrelevant in death than he was in life. Islamic traditions generally dictate that the deceased be washed, shrouded, and buried within a day, in the ground…unless there’s an extenuating emergency. And the US insists that the emergency was no one else would take bin Laden’s corpse. “Finding a country willing to accept the remains of the world’s most wanted terrorist would have been difficult,” an official told the Guardian, “So the US decided to bury him at sea.”

Further, there are rumors that the US did approach Saudi Arabia, Osama’s birthplace, but the kingdom refused to take the body. Think about the message we’re sending to Muslims (and everyone else in the world) here: This was a man no one wanted, a stateless person who gave loyalty to no worldly authority and received none in return. In life, as long as he evaded apprehension by a superpower, there was some mystique, some potency in that: He was an influential nonstate actor, a will-o’-the-wisp, a Keyser Söze. But in death, he’ll be a fallible, homeless sack of organic material, memorable chiefly for his million-dollar compound, his love of soft drinks, his copious amounts of ganja, and a dried blood stain on a king-size bed mattress. That is, if he’s remembered much at all.