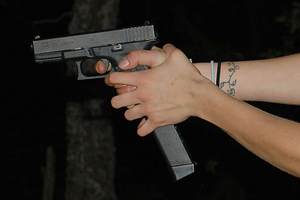 The Tucson massacre has prompted gun-control advocates to promote several measures to regulate certain firearms or ammo. But it has not moved the Obama White House to propose any such initiatives. And the White House appears to have no plans to do so.

At the daily press briefing on Thursday afternoon, press secretary Robert Gibbs was asked if the president and his aides have been thinking about crafting or suggesting any gun-related measures. He replied that he had “not heard anything particular in here.” That came across as a “no.” Gibbs did say that the White House was “looking through different proposals” that have been suggested by pro-gun-control lawmakers on Capitol Hill, but he didn’t mention any specific measures. Asked if if Obama, given his previous support of gun control, would be amenable to legislation being introduced by Rep. Carolyn McCarthy (D-NY) and Sen. Frank Lautneberg (D-NJ) to ban the manufacture and sale of high-capacity ammunition magazines, such as the one used by suspected gunman Jared Lee Loughner, Gibbs was decidedly non-committal. He displayed no enthusiasm for this measure—or for pushing any gun-control initiative.

Since the Tucson tragedy, Obama has said nothing explicitly about guns. He did not address the issue in his much-praised address at the memorial service. This is no surprise. As president, Obama has placed a silencer on his past backing of gun control. For instance, as a presidential candidate Obama called for reinstating the ban on assault weapons. Though Attorney General Eric Holder early in the Obama administration cited the reinstatement of the assault weapons ban as an administration priority, the White House has not pursued that goal, and Obama has side-stepped the matter when questioned about it. At a press conference last year with Mexican President Felipe Calderon, Obama declined to even discuss reviving this ban. The message has been clear: Obama may think gun regulation is good policy but he also has concluded taking any action that could enrage gun owners and the gun lobby is lousy politics.

The Tucson shootings places this calculation in the spotlight. Any political or media focus on gun-control measures does pose a challenge for Obama and the White House. After all, a person who endorsed banning assault weapons at least ought to favor banning high-capacity magazines. In the immediate aftermath of Tucson, the White House can plausibly say it is reviewing the various gun-control (or ammo-control) measures being proposed. But can the president escape having to declare whether or not he supports the McCarthy-Lautenberg measure forever (that is, until after the 2012 election)?

He and his aides might believe that is indeed possible. They have managed to steer clear of gun-related political trouble during the first two years of Obama’s presidency. (Recall the storm that ensued when candidate Obama said that “bitter” unemployed small-town Americans “cling to guns.”) Judging from Gibbs’ remarks, the Tucson episode—even if it entailed the near-assassination of a House member and the murder of six bystanders—has not changed the president’s strategy. He is still holding his fire.