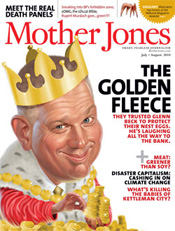 Glenn Beck might, for once, be right: the government is coming for your gold. But only if you happened to buy it from one of Beck’s *one-time advertisers, the Superior Gold Group. At the request of prosecutors from LA County and Santa Monica city who have filed a civil suit against the company, Los Angeles County judge has ordered that Superior Gold be placed into receivership and all of its assets—bank accounts, real estate, and presumably gold stored for customers—frozen. On Monday, a court-appointed lawyer actually physically seized control of the company, presumably to prevent further wrongdoing. The lawsuit alleged that among other things, Superior had defrauded its customers by overcharging them, fraudulently inducing them to buy overpriced collectors’ coins rather than the bullion that they wanted, and taking customers’ money for coins they never produced. The prosecutors hope that the lawsuit will provide restitution for all of the company’s ripped off customers. The judge will hold a hearing later this month to decide whether the company’s assets should remain frozen until the case goes to trial.

Putting a company in receivership is a pretty drastic and very rare move for a judge in a civil case. It does not bode well for Beck’s other and much bigger gold advertiser, Goldline, which has also been accused of very similar tactics, as Mother Jones documented earlier this year. The California prosecutors are also investigating Goldline. Both companies have claimed that they were targeted solely because of liberal outrage about Beck’s political viewpoints, and touted their outstanding ratings from the Better Business Bureau in their defense. But the dramatic business seizure on Monday of Superior Gold suggests that the consumer complaints were not only legitimate, but that the situation may be worse there than any of the critics suspected. Whether Goldline is in the same boat is hard to know, but the swift takeover of Superior Gold has to be making Goldline (and Beck, too) awfully nervous.

*Clarification: It appears that Superior Gold Group has not advertised on Beck’s show since December 2009, though it has proclaimed its loyal support for the conservative talk show host. In August last year, the company issued a press release criticizing attacks on Beck’s advertisers and announcing its intention to renew its advertising contract with Fox News. The company said it would continue to support Beck’s show in the face of calls by liberal groups for advertisers to boycott the show. Three months later, the liberal group Media Matters documented that Superior Gold Group ran an ad during one of Beck’s TV segments on gold, writing:

Let it never be said that Glenn Beck fails to repay those who are loyal to him.

On his show today, Beck told his audience that they should buy gold to protect themselves in the event of a U.S. economic collapse. Minutes later, that same audience was treated to a commercial for Superior Gold Group, featuring a “gold investor and a Superior Gold client” who cited “our government spending trillions of dollars and counting” and “a debt that will burden our children and grandchildren for years to come” as reasons to buy their product. I wonder how many of Beck’s viewers called their hotline on the spot?

In something of an endorsement, Superior Gold Group posted the item on its own website as if it was written in-house.