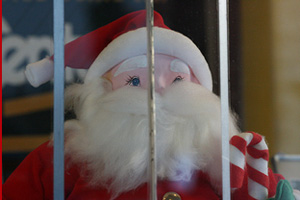 As Christmas is celebrated in Incarceration Nation, it’s worth remembering certain things about the two figures who dominate this holiday.

As more than 3,000 Americans sit on death row, we revere the birth of a godly man who was arrested, “tried,” sentenced, and put to death by the state. The Passion is the story of an execution, and the Stations of the Cross trace the path of a Dead Man Walking.

Less well known is the fact that Saint Nicholas, the early Christian saint who inspired Santa Claus, was once a prisoner, like one in every 100 Americans today. Though he was beloved for his kindness and generosity, Nicholas acquired sainthood not by giving alms, but in part by performing a miracle that more or less amounted to a prison break.

As we described in one of our earliest posts on Solitary Watch, Nicholas was the 4th-century Greek Bishop of Myra (in present-day Turkey). Under the Roman emperor Diocletian, who persecuted Christians, Nicholas spent some five years in prison–and according to some accounts, in solitary confinement.

Under Constantine, the first Christian emperor, Nicholas fared better until the Council of Nicaea, in 325 A.D. There, after having a serious theological argument with another powerful bishop, Nicholas became so enraged that he walked across the room and slapped the man.

It was illegal for one bishop to strike another. According to an account provided by the St. Nicholas Center: “The bishops stripped Nicholas of his bishop’s garments, chained him, and threw him into jail. That would keep Nicholas away from the meeting. When the Council ended a final decision would be made about his future.”

Nicholas spent the night praying for guidance, and was visited by Jesus and Mary. “When the jailer came in the morning, he found the chains loose on the floor and Nicholas dressed in bishop’s robes, quietly reading the Scriptures.” It was determined that no one could have visited or helped him during the night. Constantine ordered Nicholas freed and reinstated as the Bishop of Myra, and his feat would later be declared a miracle.

Saint Nicholas lived on to serve the poor during the devastating famine that hit his part of Turkey in 342 AD. He is reported to have anonymously visited starving families at night and distributed gold coins to help them buy scarce food.

But here in America two thousand years later, Christians go to church to worship an executed savior and shop to commemorate an incarcerated saint, with little thought to their 2 million countrymen who are spending this Christmas behind bars.