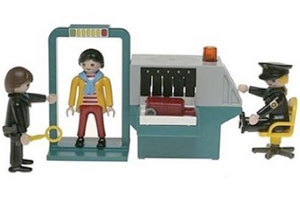 In late October, the Transportation Security Administration (TSA), which handles airport security in the US, began offering passengers a choice: either submit to being imaged by the new, invasive, “backscatter” scanners, which show your genitals to the security officers manning the machine, or risk having your junk touched by those same officers. New regulations require that the TSA perform “enhanced pat-downs”—which some critics have described as “groping”—of anyone who declines the controversial full-body scan. If you decline both procedures, as Californian John Tyner did this week, you can be investigated and face fines up to $11,000.

Although a recent poll showed that over 80 percent of Americans are okay with the new scanners, the forced choice between the “naked” imaging and the new pat-downs has a vocal group of fliers and airport security reformers up in arms. On October 29, Atlantic magazine writer Jeff Goldberg, who’s cultivated a sort of side-career as an airport security reformer, wrote a hilarious blog post about his experience with the new pat-downs. The post, in which Goldberg banters with TSA officers about his testicles, was widely circulated on the Internet. But it wasn’t until John “Don’t Touch My Junk” Tyner taped his own encounter with the TSA that the story really took off, fuelling criticism of the TSA across the media and political spectrum.

My colleague Kevin Drum is tired of hearing the complaints. So on Monday, he issued a challenge:

[W]hat I haven’t seen is an informed take on what airport security ought to look like. We all hate taking off our shoes and pulling out our laptops and being limited to three ounces of liquid and not being allowed to meet people at the gate anymore — we hate all of that. But if it’s all useless, what should we do instead? Shouldn’t someone write that article?

Ever dutiful, I set out to complete Kevin’s assignment. I asked Goldberg, security expert Bruce Schneier, and airline pilot (and security critic) Patrick Smith about what their ideal airport security schemes would look like. After speaking to them, I think Kevin is missing the point: the elimination of existing useless security procedures is the heart of the plan. It’s not about doing something “instead” of the current system—it’s about not doing things that are wasting money and time and not making us safer. It’s quite possible that we’re already as safe as we’re going to get—and every subsequent airport security “improvement” is just reducing our freedom without improving security.

Schneier is famous for explaining that “exactly two things have made us safer since 9/11: reinforcing the cockpit door and convincing passengers they need to fight back. Everything else is a waste of money.” All three experts favor scrapping most of the security measures that people hate—and not necessarily replacing them with anything. Ideally, the money that was saved wouldn’t be spent on airport security at all: it would be spent on trying to stop terrorists before they got to the airport. That means better-funding law enforcement and intelligence.

All that said, Goldberg, Schneier, and Smith did offer some suggestions for new or different security procedures to use “instead” of the methods we’re currently relying on. Here are a few options: