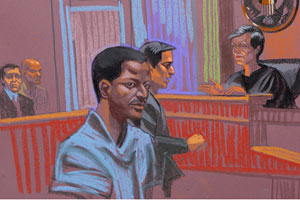 People who want to put terrorists in prison—or execute them—(and I think most of us want one or the other) should ask themselves one thing: would they rather be Ahmed Khalfan Ghailani or Omar Khadr?

Last month, Khadr, a Canadian-born Guantanamo detainee who was captured in Afghanistan as a teenager, agreed to a plea deal under the military commissions process. A military jury subsequently sentenced him to 40 years in prison for a number of crimes, including throwing the grenade that killed Army Sgt. Christopher Speer in 2002. The 40-year sentence was just for show: Khadr is likely to be released soon after he is returned to Canada next year. Ghailani’s fate will be quite different. On Wednesday, a federal jury in New York convicted him of conspiracy for his role in the 1998 bombings of two US embassies in Africa. While Khadr will be out of prison by 2012, Ghailani will almost certainly spend at least the next two decades—and possibly the rest of his life—in federal prison.

Most reasonable people would rather serve Khadr’s year-or-so in Gitmo than Ghailani’s 20 years to life. But because the jury acquitted Ghailani of 280 other counts of conspiracy and murder, conservatives and major media outlets are united today in suggesting that the outcome of the trial—the first of a Gitmo detainee in civilian courts—casts doubt on the prospect of future civilian trials. The current conventional wisdom seems to hold that the outcome of the Ghailani trial proves that military commissions are a superior method of punishing terrorists. The record shows the opposite is true.

A federal trial provides far more effective closure than a military commissions proceeding. “The federal court trial has provided final resolution for this particular case,” says Dixon Osburn, the Law and Security director for Human Rights First. “It gives the verdict a level of legit that no verdict in commission system has.” In other words, the idea of human rights protestors standing outside of the SuperMax facility in Florence, Colorado (or wherever Ghailani ends up) to protest Ghailani’s imprisonment seems unlikely, to say the least. Ghailani has been convicted in a fair and open court: now he will go away for a long, long time.

Ghailani will have plenty of company in federal prison. Mohamed al-Owhali, Khalfan Khamis Mohamed, Mohamed Odeh, and Wadih el Hage—all convicted for their roles in the same embassy bombings that Ghailani was involved in—are already cooling their heels in Florence.

Why are there so many terrorists in federal prison? Because the law gives the government enormous advantages in prosecuting terrorism cases. Material support charges—which can stem from something as simple as giving someone a cell phone—carry sentences of up to 15 years—or life, if the material support results in someone’s death (as terrorism often does). Conspiracy charges, the bread and butter of many federal prosecutions, carry sentences of 20 years to life. And their statute of limitations dates from the last act of the conspiracy—not when it was hatched.

Moreover, federal court convictions are far harder to appeal than military commission verdicts, and many legal scholars and judges believe that some of the crimes Ghailani was charged with (such as conspiracy) aren’t even triable in military commissions. This (unfortunately anonymous) quote from a senior Obama administration official on the Ghailani verdict is informative:

[Ghailani] was convicted by a jury of a count which carries a 20-year minimum sentence. He will very likely be sentenced to something closer to life. (The judge can, and very likely will, take into account things that the jury did not, and he can and will consider conduct that the jury found him not guilty of —e.g., murder). He will never be paroled (there is no parole in the federal system). There are very few federal crimes that carry a mandatory MINIMUM of 20 years. What that means is that he was convicted of a crime that is a very big deal.

So, we tried a guy (who the Bush Admin tortured and then held at GTMO for 4-plus years with no end game whatsoever) in a federal court before a NY jury with full transparency and international legitimacy and—despite all of the legacy problems of the case (i.e., evidence getting thrown out because of Bush-Admin torture, etc,) we were STILL able to convict him and INCAPACITATE him for essentially the rest of his natural life, AND there was not one—not one—security problem associated with the trial.

Would it have been better optically if he had been convicted of more counts? Sure. Would it have made any practical difference? No.

Of course, if your main goal is something other than making sure terrorists spend a lot of time in prison, you might see things differently. The truth is that the purpose of the military commissions system is not to punish terrorists. The structure of the military commissions suggests their main goal is to add a veneer of legality to the continued extrajudicial detention of alleged terrorists while giving the military, the administration, and the intelligence community more control over the handling of information about the alleged torture of detainees. There are serious arguments for pursuing that goal. But no one should pretend that goal is the same as—or even compatible with—the goal of punishing actual terrorists for their actual crimes.

*Some people might argue that it’s unfair to compare the crimes that Khadr and Ghailani were accused of committing. But Khadr, like Ghailani, could have faced the death penalty for his crimes if he had been tried in civilian court. The potential punishment was the same.