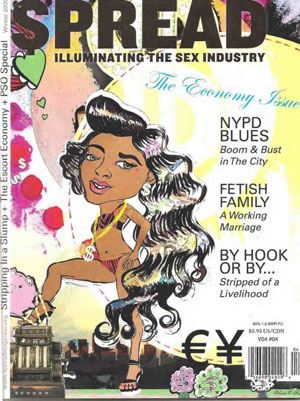 Asked if he’s ever felt exploited as a sex worker, Will Rockwell—the 24-year-old editor-in-chief of the sex worker-operated magazine $pread—replies, “Yes, by the media. Every interview we do is twisted for the purposes of sensationalistic propaganda, whether it’s the conservative New York Post jerking itself off over the Spitzer scandal or Ms. Magazine fantasizing about female victimhood and applying it in broad strokes to people they never really cared to know, and certainly never offered a helping hand free of judgment and surveillance.” He says the sensationalist and often stereotype-ridden depictions of sex workers—prostitutes, exotic dancers, dominatrices, phone-sex operators, and people who engage in informal forms of transactional sex—by media outlets sparked the 2005 creation of $pread, the country’s only magazine developed by and for sex workers.

With a circulation of about 3,000 (“Each copy is passed between 4 or 5 people on average, according to a readers’ survey,” Rockwell asserts), the quarterly magazine includes anything from “product reviews (from false eyelashes to anal lube), to personal essays about weird clients, to news reports on international public policy and events affecting sex worker communities around the globe,” according to its website. $pread’s current “Aging” issue, which is sold online and available in a few independent bookstores, grapples with maturity in a profession seemingly absorbed with youthful appearance (“Strippers in their 40s are hardly uncommon,” Kristen Casey writes in one article).

Rockwell, a male sex worker who’s serviced men for almost a decade, has been the head honcho at the New York-based publication for more than a year; he’s volunteered for the magazine for three years. “I took the [unpaid] job because the first article I read in $pread was in Issue 2.4, named ‘I killed a client in self-defense,'” Rockwell told Mother Jones via email. “It is an entirely matter-of-fact story about a woman working an outcall who was stabbed by her client before she took the knife from him and killed him in self-defense. When the police arrived, they arrested her for the murder of a married military officer, but she was later proven innocent. I was impressed that she described her experience without one iota of judgment for sex work in general—in other words, it wasn’t the job that was wrong, but the world that surrounds it.”

Rockwell answered more questions from Mother Jones about $pread, whether feminists should favor or fight the decriminalization of prostitution, and what he thinks about the Craigslist scandal.

MJ: What are some common misconceptions that people have about sex workers?

MJ: How does $pread tackle these myths?

WR: $pread publishes a range of experiences in the sex industry. For some people it’s all a field of roses; for some of us, it was our best option among limited options, and others experienced violence at the hands of the police and a stigmatizing culture. In all cases, $pread provides a forum for sex workers to speak for themselves.

MJ: Why is it important that sex workers have a media outlet?

WR: We are talked about everywhere, in newspapers publishing our death notices, at lawsuits in court, but nowhere will people listen.

MJ: Has $pread ever gotten flak from conservative or religious organizations?

WR: Always, but mostly “feminist” ones, surprisingly. Apparently it’s hard for some people to believe that women, let alone those of us men working, are able to choose sex work over other types of work under post-industrial capitalism. Despite the fact that the sex industry is the only one in which women get paid more than men, and they want to take that away from them!

MJ: How do you respond to feminists who say they could never imagine any person willingly selling their body for money?

“It’s not selling your body, it’s more like controlled-access rental.”

MJ: Does your own narrative dispel or confirm myths surrounding sex work?

WR: I’ve long since stopped trying to reconcile the disparate narratives people think about when it comes to sex workers. Victim, whore, whatever, it’s all about circumstance. Until you provide living wage alternatives and affordable housing for everyone in the sex industry, don’t even dare claim you know what’s good for us.

MJ: How do staff members at $pread handle accusations that the magazine is encouraging folks to join the sex worker industry?

WR: We just respond that we don’t invent the fact [that sex work exists], we simply provide a venue for sex workers to be heard. Our articles come from the mouths of sex workers here in the United States who volunteer their stories to the community, as well as sex workers around the world who write in—Taiwan, India, South Africa, Mexico, Australia, and more.

MJ: What obstacles did $pread encounter before the first issue went out?

WR: A number of supposedly professional services such as banking and postal status are hostile to “adult businesses,” despite the fact that we don’t publish nudity and aren’t selling sex in $pread’s pages.

MJ: I’ve read that $pread is completely volunteer-operated. Where does the staff come from and what’s the hiring process entail?

WR: Volunteers write to us and we fit them in—if they are in New York, they start slow, helping pack magazines or pick up where someone else left off in advertising or outreach. If they are outside of New York, we ask them to throw a benefit, promote subscriptions, and, if a sex worker and writer, pen articles for us.

MJ: Does $pread have any competitors?

Flickr/EliyaWR: We are the only by- and for-sex-worker magazine currently publishing in the United States, although Danzine [1995-2005] was the first. For years, however, sex workers have made their own media in the form of “Bad Date Lists,” distributed to help protect ourselves from violent clients and cops. Bound, Not Gagged is an online blogging community that is currently in operation, and Red Light District Chicago produces videos. As for the rest of the world, Stella has the French-language ConStellation in Montreal. China has Flower in Beijing. There is also the Red Light Despatch in India.

MJ: What is the typical production process at $pread like?

WR: A long and arduous process that, with the help of lipstick and elbow grease, blossoms in genius.

MJ: I’ve also think I read that $pread operates solely on donations. Was it hard to find donors for a sex-worker magazine?

WR: We make money mostly from subscriptions, donations, advertising, and distro. Our donors are most often sex workers themselves, contributing $10 to $20 on top of their annual subscription charge in order to help us fight the good fight.

MJ: What uber-relevant newsy topics would you like to see $pread tackle in the future?

WR: The “Craigslist Two” letters being circulated, claiming the site profits off of the trafficking in women. It would be more accurate to say that Craigslist profits off of a culture of policing sex workers that results in heavy fines, phone and credit card tracking that has ruined one of the most equalizing forces in the sex industry in generations.

MJ: Could you explain why you consider Craigslist to be “one of the most equalizing forces in the sex industry in generations”?

MJ: Speaking of Craigslist, the website raised its adult-services posting fees back in 2008 as a child prostitution deterrent, which really doesn’t make sense to me. (Do they think people who sell kids for sex are broke and won’t pay?) Anyway, this topic is mentioned in the Aging issue, but could you talk a little bit about how decriminalization could help prevent child prostitution—something I’ve heard from various sex workers?

WR: I believe [Craigslist’s] intention was to capture more information to make it available to law enforcement by subpoena or volunteering the information (credit card numbers are captured with the fees). I’m not sure what you mean by “child prostitution,” but the first line of defense against traffickers is sex workers working in the same venues but not subject to the same controls, as well as clients that report the conditions to the police. Only in countries that criminalize sex work do sex workers and clients become a threat rather than a resource in combating trafficking.

“Too little attention is paid to the collateral consequences of criminal charges.”

MJ: Have you ever been in a scary or dangerous situation while working that you think could have been prevented or helped if prostitution was decriminalized?

WR: I was once shorted out of an entire night’s pay by a client who told me he was going to call security on me if I didn’t leave. I decided against calling the police, because every case I heard of involved the police arresting the sex worker. Instead, I had to let a rape go unpunished.

MJ: What are some other legal challenges that you’ve faced as a sex worker?

WR: While male sex workers aren’t policed in the same “raid and rescue” manner as nontrans women in the United States unless they are considered “underage,” police will use related charges, such as disorderly conduct, loitering, or drug possession, or simply charge up to what they feel will stick, in order to achieve the same effect minus the prostitution charge. In cities around the country, police file nuisance-abatement lawsuits and health code violations in the gay male sex venues where male sex workers work, denying us a safe place to work indoors and receive access to HIV prevention services.

MJ: Beyond having much-needed legal recourse to press charges if you are abused while working, what would you as a sex worker gain if prostitution was decriminalized?

WR: I would be able to stop looking over my shoulder and leading a double life, with fake names and fear of exposure.

MJ: $pread advertises itself as for and by sex workers. In that case, is the magazine concerned with debunking or verifying the judgments that non-sex workers may have about sex workers?

WR: We view the effect we have on civilians as secondary. Our mission is by and for sex workers, and anything else is just butter.

MJ: Why do you think prostitution has yet to be decriminalized in this country?

WR: Sex work has yet to decriminalized in the US because people fear what is most familiar: We know our fathers and husbands are clients of sex workers, and our sisters, cousins, and friends find a way to pay the rent when two or three jobs aren’t enough to make ends meet.

MJ: You’ve said that no US legislator has ever contacted $pread to discuss public policies related to sex workers. But how would you respond to one who did?

WR: Well, would they be a client? It’s a crucial question. We have so many clients in positions of power on this question, but so few who are willing to take a public stand.