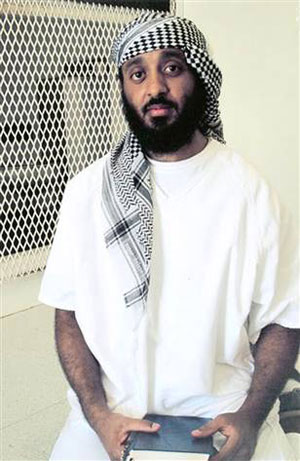 The Associated Press reports on the content several Bush-era interrogation tapes the CIA supposedly found under an employee’s desk in 2007. According to the AP story, the mysterious tapes depict the questioning of 9/11 plotter Ramzi Binalshibh in a prison in Morrocco—but they just happen to be free of any evidence of harsh treatment:

Discovered in a box under a desk at the CIA, the tapes could reveal how foreign governments aided the United States in holding and interrogating suspects. And they could complicate U.S. efforts to prosecute Binalshibh, who has been described as one of the “key plot facilitators” in the Sept. 11, 2001, attacks.

Apparently the tapes do not show harsh treatment—unlike videos the agency destroyed of the questioning of other suspected terrorists.

The two videotapes and one audiotape are believed to be the only existing recordings made within the clandestine prison system and could offer a revealing glimpse into a four-year global odyssey that ranged from Pakistan to Romania to Guantanamo Bay.

The tapes depict Binalshibh’s interrogation sessions in 2002 at a Moroccan-run facility the CIA used near Rabat, several current and former U.S. officials told The Associated Press. They spoke on the condition of anonymity because the videos remain a closely guarded secret.

In 2005, the CIA destroyed nearly 100 tapes that featured accused Al Qaeda plotters Abu Zubaydah and Abd al-Nashiri being waterboarded. At that point, “officials believed they had wiped away all of the agency’s interrogation footage,” the AP says, but that was apparently not the case. In late October 2008, the government told a federal judge it had found what we now know are the Binalshibh tapes. But nothing was known about their contents until Tuesday.

Over at FDL, Marcy Wheeler offers some “wildarsed speculation” that the Binalshibh tapes have been altered in the same way as those that once depicted the interrogation of Abu Zubaydah (and now show “nothing but snow”). Here’s the ACLU’s Alex Abdo commenting on the revalations:

Today’s report is a stark reminder of how much information the government is still withholding about the Bush administration’s interrogation policies. Many records critical to real accountability remain secret, such as transcripts in which prisoners tell of the abuse they suffered in CIA custody and the presidential directive authorizing the CIA to establish secret black sites.

The content of these tapes could provide insight into the U.S.’s troubling collaboration on interrogations with Morocco, a country routinely cited by the State Department for its use of torture. Only with real transparency and accountability for these abuses can the government turn the page on this dark chapter in our history.

The “under-the-desk” tapes aren’t the only interrogation records that survive. Audio and video records of Mohammed al Qahtani’s interrogation still exist, too. Foreign observers of interrogations may have made their own recordings. Also, there has always been talk of a parallel, digital recording system at some overseas prisons and black sites. And the CIA medical personnel monitoring “enhanced” interrogations must have had some way to review sessions at which they couldn’t be present, right? Even if the CIA really did destroy all the visual records of waterboarding, “walling,” stress positions, and so on, it would have a lot more trouble getting rid of all the paper records describing the content of the tapes. There’s no question that there’s enough information out there to paint a pretty detailed picture of the rendition, detention, and interrogation program. America just has to muster up the political will to look for it.