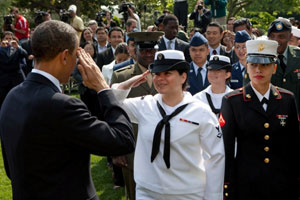 President Obama’s speech on immigration at American University on Thursday offered very little in terms of a path forward for a comprehensive immigration overhaul. Though the president made a concerted effort to emphasize the aspects of immigration that might appeal to more moderate voices in the debate, stressing the economic contributions of highly skilled immigrant workers and the assimilation of earlier waves of non-Hispanic immigrants. But in terms of substance, Obama stuck to the basic outline that Democratic Senators have already hammered out, without giving any concrete goals or deadlines for moving the ball forward.

Obama did suggest, however, that the White House might push for some smaller reform measures, perhaps even ahead of a comprehensive overhaul—a move that could placate some reform advocates and that’s bound to infuriate others who are already frustrated with the administration’s foot-dragging on a big reform package.

From start to finish, Obama made reference to the European and Asian waves of immigration that had bolstered the nation’s economy. Calling the US “a magnet for the best and the brightest,” he reeled off a list of names of highly skilled immigrants who’d come to the US—Einstein, Tesla, Carnegie, and Google’s Sergey Brin—all white, European immigrants. “This steady stream of hard-working and talented people made America the engine of global economy,” he said. Asians also got a few nods, including a reference to a South Asian woman whose small business employed 100 people, as well as a group Chinese immigrants who’d been detained and interrogated in San Francisco a century ago. There was just one Hispanic immigrant singled out in the speech—a military servicewoman who’d been recently naturalized. Obama closed out the speech by describing how New York had absorbed “Jewish people driven out of Europe” in the last century—and how an American immigration advocate, Emma Lazarus, had helped fund the Statue of Liberty and wrote the famous words on its pedestal.

By framing his speech this way, Obama was clearly trying to expand the current debate’s almost singular focus on low-skilled, illegal Hispanic immigrants—the target of Arizona’s immigration law and other flashpoints that have fueled “demagoguery” around the issue, in the president’s words. The focus on highly skilled workers—who do more frequently come from Europe and Asia—is also at the heart of the business community’s support for immigration reform within the high-tech sector, a constituency that’s also one of the biggest Obama donors.

This argument, of course, is nothing new: it was also part of the Bush administration’s ultimately futile push for an immigration overhaul in 2006 and 2007. Obama even made reference to Bush’s “courageous leadership” on the issue today. And the nuts-and-bolts of Obama’s plan—as he and the Democrats have laid out before, and as he repeated in his speech today—are essentially the same as they were in the Bush days: ramping up border security, cracking down on illegal hires by employers, reforming the visa system, and providing a pathway to legalization for illegal immigrants to “get right with the law.”

Obama faulted Republicans—some of whom had previously supported immigration reform—for being at the heart of  “the failure of those of us in Washington to fix a broken system.” In criticizing Arizona’s harsh immigration law as “ill-conceived” and “unenforceable,” he emphasized that “one clear national standard is needed.” But, as many had expected, Obama gave no new timeline or benchmarks for progress in terms of pushing major legislation forward—and didn’t explicitly call upon Congress to put such a bill together. (He also gave no indication of when the administration was planning to file its announced lawsuit against the Arizona law.) The most hopeful reform advocates expect that Congress could move during its lame-duck session after the midterm elections. But given the woeful state of financial regulatory and clean energy reform, it’s difficult to imagine that happening unless both the president and Congress suddenly and dramatically switched gears.

The cynic’s take would be that Obama’s speech was simply meant to throw a bone to Latinos in advance of the midterm election in hopes of riling up their enthusiasm for Democrats. I don’t doubt that politics played a part in terms of the timing of the address. But I also think it was meant to appease the immigration advocates who’ve been pounding down the White House’s door since the beginning of the administration. The one piece of legislation that Obama mentioned in his speech was the DREAM Act, which would provide a pathway to legalization for some illegal immigrants who finished college or served in the military. In recent months, activists have rallied around the bill, holding hunger strikes and sit-ins by illegal immigrant students. The case of Eric Balderas, the Harvard student and aspiring cancer researcher who was detained by immigration authorities, provided new political momentum for the bill.

“We should make room for ‘best and the brightest’…to contributes their talents to the country,” Obama said. “The DREAM Act would do this—which is why I supported it as a state legislator and senator, and why I continue to support this as president.” The bill clearly resonated with the other major themes of Obama’s speech: it rewards the most motivated immigrants who’ve committed themselves to a future in the US and already has bipartisan support in the Senate. Detractors argue that passing a stand-alone bill would be elitist—rewarding only those who’ve already made it to Harvard, for instance—and would sap momentum from passing a comprehensive overhaul. But given the dim chances of passing such an overhaul in the near future, Obama may be signaling a desire to go after more incremental reform measures in the meantime.