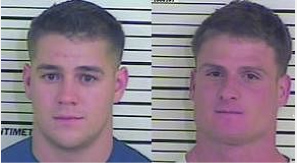 [UPDATE: This story is being updated regularly with information from the US military. Please check for new updates at the end of the story.]

Two young Marines are sitting in a military brig this morning, accused of beating a gay man in Savannah, Georgia, so badly he had a bruised brain and two seizures. And while details on the case are just emerging, it has huge implications for the end of “Don’t Ask, Don’t Tell,” as well as the justice system in Georgia, which lacks hate-crime laws and charged the men with a simple misdemeanor.

The service members, Keil Joseph Cronauer and Charles Stanzel, were barhopping in Savannah, just over the border from the base where they’re stationed, Marine Corps Air Station Beaufort, South Carolina (of The Great Santini fame.) According to the Savannah Morning News, one of the Marines grew convinced that 26-year-old Kieran Daly, who came out six months ago, winked at him.

In police parlance, an altercation ensued. Daly was punched in the back of the head so hard, he had to be taken to the hospital.

The Marines, who were caught on foot after fleeing the scene, say they were “being harassed by a gay man and wanted to get away from him,” but eyewitnesses and Daly himself disputed that account:

Daly said one of the men told him he demanded respect because he served in Iraq. And at least one hurled slurs at him as he tried to walk away.

“That’s the last thing I remember is walking away,” Daly said.

Obviously, an investigation is ongoing, and no one’s guilty yet. But if service members on liberty can’t hold their liquor or their emotions—and regardless of what happened, that much seems clear here—there’s a long way to go before the military will be able to successfully integrate gays and lesbians in the military ranks.

Worse still is the fact that, since Georgia doesn’t recognize hate crimes under state law, Savannah authorities had to charge the two men with simple misdemeanor battery. “It leaves me wondering why Georgia is one of five states that doesn’t have a hate crime law on the state level,” Daly told the Morning News from his hospital bed. The Marines have since been transferred to military custody on their base.

In a perfect world, the Marines—who don’t suffer misconduct lightly—would prosecute Cronauer and Stanzel to the fullest. As riflemen trained in hand-to-hand combat, an Article 32 investigation for assault with a deadly weapon (namely, their hands) wouldn’t be out of order here. But in a military where a sexually abusive doctor with repeat offenses gets a week in the brig, what the Marine JAGs will do here is anyone’s guess.

[UPDATE: Gunnery Sgt. Chad McMeen, the public affairs officer for Marine Corps Air Station Beaufort, tells me that Lance Cpl. Stanzel and Cpl. Cronauer are “in an on-base restriction status” pending the outcome of multiple investigations: a military one, a Chatham County, Georgia, one, and “possibly an FBI investigation.” While McMeen could not confirm the latter, FBI involvement would likely indicate that the Marines’ behavior is being examined for evidence of federal hate crimes. “Both squadrons (to which the Marines are assigned) are conducting an investigation,” McMeen says. No telling how long the investigations will take, but “a lot of it hinges on Chatham County,” he says, adding that until the inquiries are closed, Stanzel and Cronauer will remain on “barracks restrictions.” A comment from the Marines’ air wing commander is expected to follow shortly. MoJo will keep you posted.]