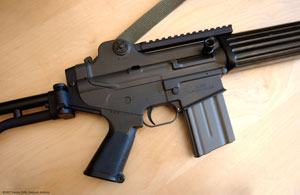 When Mexican President Felipe Calderon addressed the US Congress on Thursday, he called for the United States to reinstate the ban on assault weapons that expired in 2004 under the Bush administration. Calderon noted that a ban on these weapons, which are flowing south across the border to violent drug cartels, could help Mexico reduce the horrific violence that has seized parts of that country.

Calderon might be forgiven for assuming that this would be a reasonable request to make to the Obama administration. While campaigning for the presidency, candidate Barack Obama backed permanently reinstating the ban. After he assumed office, his administration quickly announced it would proceed on this front. On February 25, 2009, Attorney General Eric Holder declared,

As President Obama indicated during the campaign, there are just a few gun-related changes that we would like to make, and among them would be to reinstitute the ban on the sale of assault weapons.

Holder specifically noted that resurrecting the ban would reduce the number of guns pouring into Mexico and fueling the violence there.

Compare Holder’s unequivocal statement to how the White House these days addresses the matter. Hours after Calderon’s appearance on Capitol Hill, press secretary Robert Gibbs was asked about this issue. Here’s the full exchange:

Q: Robert, speaking of President Calderón, this morning in his address to Congress, he asked lawmakers to reinstate the assault weapons ban, something the President has supported in the past.  Does the President still support that and does he plan to lean on Congress to make progress?

GIBBS:  I would — because the President largely got asked this question yesterday about both drugs and weapons moving across the border, I’d point you to the answer that he gave about increased inspections on cargo that’s moving from the north to the south.

You know the rest. At Obama’s joint press conference with Calderon the previous day, this is what the president said,

Through increased law enforcement on our side of the border, we’re putting unprecedented pressure on those who traffic in drugs, guns, and people.  We’re working to stem the southbound flow of American guns and money, which is why, for the first time, we are now screening 100 percent of southbound rail cargo.

Nothing about an assault weapons ban. A Mexican journalist followed up and asked Obama, “Shouldn’t there be an initiative that will regulate guns as they are sold? Is there going to be a ban?” Obama again talked about interdiction efforts and didn’t address the assault weapons ban.

Not only will the White House not make good on candidate Obama’s promise to revive the ban or Holder’s announced decision to do so, it won’t even talk about the assault weapons ban. Not a word. The reason is obvious: Obama and his aides don’t want to spark a backlash from the NRA and voters who cling to their guns—especially as Democrats ride toward a difficult mid-term election. On this dicey topic, Obama cares most about ducking a political bullet.