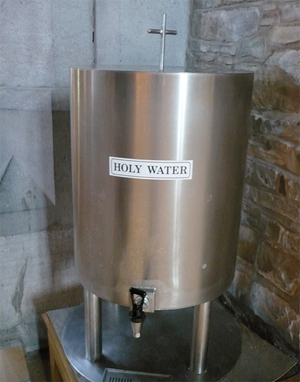 [UPDATE: The plot to this story has thickened, with spying, sniping, union intrigues, and right-wing patriots. Check out the latest here: “Tea Party, Union Back Holy Water Teachers.”]

Growing up there, though, I knew the region wasn’t all Miami Vice, CSI, or even Dave Barry columns. As in every part of the union, South Florida has its traditional nooks, where mainly minority working-class folks with old-time discipline and old-time religion reign supreme. Western Pompano Beach, on the wrong side of the tracks from the ocean, was one such place. At its core, tucked between a crumbling neighborhood road and I-95, was Ely High School, where I graduated from.

That’s where local pastors say Leslie Rainer and Djuna Robinson, two Christian teachers, doused colleague Schandra Tompkinsel Rodriguez with “holy water” March 11 in the middle of a class Rodriguez was teaching. They claim she was discussing her nonbelief with the students, thus warranting their aqueous intervention. Rodriguez filed a complaint, and the teachers were removed from campus.

You’d assume that’s the end of the story. But not in Pompano Beach. [More]

Local pastors have rallied to the defense of Robinson and Rainer (whose husband runs a church), asserting that the Broward County School Board is launching “an attack on Christianity.” Supporters gathered yesterday evening to discuss this perceived injustice; the site of the summit tells you something about their worldview. It’s the Worldwide Christian Center, a stuccoed warehouse-style structure jutting out of a blighted corner on Pompano’s Powerline Road. Worldwide is run by the Rev. O’Neal Dozier, a slim ex-NFL football player with a 90’s-era fade cut, who also graduated from my alma mater. According to the South Florida Times, an African-American newspaper:

“We were contacted, and we agreed to hold the meeting at our church,” said the Rev. O’Neal Dozier, pastor of the Worldwide Christian Center. “We have to make sure this is not an attack on Christianity. It is totally unfair to remove the two teachers, and allow the other teacher to remain. We need answers and for them to be returned to the classroom.”

I’ve interviewed Dozier, and he is a fascinating figure. A hellfire-and-damnation minister, he has campaigned to keep Muslims out of Pompano, as well as to ban the religion altogether, calling it a “cult” of “terrorists.” He’s said homosexuality is “something so nasty and disgusting that it makes God want to vomit.” But he’s also been a hot commodity with the Republican party, particularly when Karl Rove advised the White House, and conservative Christianity was seen as a way to court black votes. He met “on numerous occasions” with George W. Bush at the White House. He served on then-governor Jeb Bush’s state judicial nominating committee, causing waves when he insisted on nominees telling him whether they were “God-fearing.” And he campaigned for Gov. Charlie Crist in 2006, until his Islam remarks compelled the now-independent Senate candidate to jettison him.

I spoke to Dozier in mid-2008, when he told me he was encouraging his mostly black congregation to vote for Mike Huckabee, and that Barack Obama was, like Hillary Clinton, rather on the wrong side of evil. (Later, he’d say of President Obama: “The Scripture warns Christians not be deceived by fine sounding words by false teachers. Obama’s rhetoric is lofty but his positions hellish, his speeches are inspiring but his voting record is infernal. Obama supports abortion, homosexuality, and restrictions of religious liberty.”)

It’s so simple. It doesn’t merit a discussion—I don’t know why everybody’s in an uproar. What you had here was a group of teachers—you had one teacher, who is an atheist, who doesn’t believe in God, dealing with a classroom full of kids—saying that God is not real, that there is no god. And the other two teachers came into the room and stood in the doorway of the classroom, and they said, yes, God is real. And in the midst of the discussion, one of the teachers who was suspended said to the atheist teacher—she simply said, ‘You need some holy water sprinkled on you.’ So she reached into her purse and made like to pretend it was holy water—she didn’t sprinkle nothing. These teachers were friends, see, and I think they went from there and had lunch together and everything. They were friendly. But subsequently, that atheist teacher filed a complaint with the Broward school system.

In the meantime, Dozier has mobilized a media circus, calling meetings and getting his parishioners in front of cameras. One told the local ABC affiliate that Robinson’s and Rainer’s suspension was unfair: “If we’re going to ban talking to students about God, then the atheists should be banned also from discouraging kids.”

The facts of the case against Rainer and Robinson, obviously, are murky, and MoJo will follow the developments.

But we can say a few things. As an Ely alum, who was privy to the joys and sufferings in neighborhoods like Rainer’s and Robinson’s and Dozier’s, I understand the pull of community and faith—a hard faith to sustain a community that perennially faces hard times. But there’s a dark side to that pull, a desire to want to root out anything unfamiliar, anything potentially threatening to the hand-stitched patchwork of tradition. It’s a counterproductive aim. In the hands of each community’s hardest men—men like Dozier—the social fabric that binds Ely High, and Pompano Beach, and South Florida, and ultimately America, is only likely to fray further.