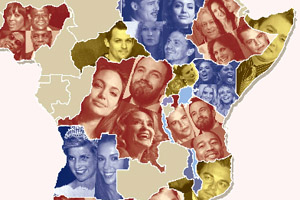 Former Liberian dictator Charles Taylor is currently on trial for war crimes in Paris. That’s only to be expected, given his record. What was wasn’t entirely expected was the revelation in January that Taylor once tried to give a rough-cut diamond to British supermodel Naomi Campbell when the two were in South Africa for a charity event hosted by Nelson Mandela. Making things even more awkward: Taylor was re-gifting a “conflict diamond” that had been given to him by the government of Sierra Leone. Not since Kim Jong-Il asked Madeleine Albright to be his pen pal has a despot struck out so spectacularly.

According to the prosecution, Campbell was offered the diamond by Taylor’s goons in the middle of the night, and told fellow guest Mia Farrow about the incident the next morning. (Taylor, not surprisingly, denies the whole thing.) The testimony was eventually discarded by the judges as “prejudicial” hearsay, but that doesn’t necessarily mean it’s inaccurate. Nonetheless, the story raises more questions than it answers: For instance, what kind of charity event includes Charles Taylor? And what did they talk about at dinner? Chalk this one up to bad luck, but Campbell has built an impressive resume as the King Leopold of the celebrity recolonization of Africa. In the last decade she’s promised to help Kenya’s impoverished people by building a hotel for billionaires on an endangered turtle habitat (but only if they built a better airport). She’s also promised a modelling school in East Africa, and a rehab center.

Campbell’s not the only celebrity running amuck in Africa, though. In the March/April issue of MoJo, senior editor Dave Gilson delved into the growing celebrity presence on the continent. He put together an interactive map, which, in this fact-checker’s opinion, is kind of awesome. Some of the activism is pretty commendable, some of it not so much (see Hilton, Paris). But don’t take my word for it; give it a look. As for the Campbell story, you can read the transcript here (pdf). The crazy stuff begins on page 89.