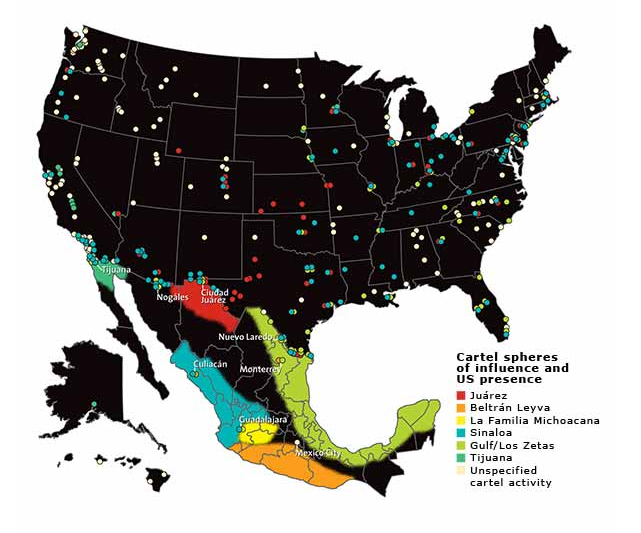 When we published a special drug issue last year, the Mexican cartels were intensifying border violence as the scrabbled for territory in urban hubs like Ciudad Juarez and Nuevo Laredo. Nearly a year later, the landscape has changed dramatically. The once-small splinter group called Los Zetas is now a cartel in their own right, and a powerful one. The Zetas are growing so dominant that the long-time rival Gulf and Sinaloa (and according to some reports, La Familia Michoacana) cartels have actually joined forces to fight them, merging into a super-cartel known as the New Federation. Last month, the New Federation put a message to the Mexican people on YouTube, saying that “Without the ‘Z’ you will live without fear… If you are a Zeta, run because the MONSTER is coming… the new alliance have raised their weapons to fuck the Zetas because they have undermined the drug trafficking business with their kidnappings, extortions, etc. To sum it up, they don’t give a shit about the freedom and tranquility of the Mexican people.”

I’m not sure exactly how the New Federation thinks they’re such guardians for the Mexican people’s peace, but it’s kind of amazing they’ve come together as the Gulf and Sinaloa’s heads have (allegedly) been behind the murders of each other’s family members, dons, and foot soldiers. Desperate times call for desperate measures and Los Zetas, known for gruesome incidents like when they beheaded 12 people at a Yucatan ranch in 2008, have become too powerful to be ignored, controlling a territory that now goes down into Central America with training camps in Guatemala.

As STRATFOR reports, the cartels’ escalating and continued gun battles, including the recent Gulf-Sinaloa alliance against the Zetas, is having economic effects on Mexico, from discouraging tourism to the “willingness of foreign companies to invest in Mexico’s manufacturing sector.” STRATFOR writer Scott Stewart makes the valid point that in attempting to break up the cartels, Felipe Calderón may have broken them but with the result of increased violence as the organizations react to structural changes:

This weakening of the traditional cartels was part of the Calderon administration’s publicized plan to reduce the power of the drug traffickers and to deny any one organization or cartel the ability to become more powerful than the state. The plan appears to have worked to some extent, and the powerful Gulf and Sinaloa cartels have splintered, as has the AFO. The fruit of this policy, however, has been incredible spikes in violence and the proliferation of aggressive new drug-trafficking organizations that have made it very difficult for any type of equilibrium to be reached. So the Mexican government’s policies have also been a factor in destabilizing the balance.

The balance of power is a key factor in the cartels’ world, and events like arrests or murders of key cartel personnel have a destabilizing effect, opening up a power vacuum for the strong or opportunistic to fill. For example, the Zetas first came to power around 2003 when the Gulf cartels’ territory (see map above or here) was threatened after don Osiel Cárdenas was arrested. Sensing weakness, Sinaloa moved in to take over corridors in key cities like Nuevo Laredo, which sits just across the Mexican border from Laredo, Texas. To fight Sinaloa, Gulf employed the Zetas, many of whom used to be anti-drug soldiers for the Mexican police. As the Mexican police have focused on taking down the big cartels like Sinaloa and Gulf, the Zetas have had room to stretch their legs, taking over new territory and breaking off from their former Gulf allies. In that way, the Mexican government is trying to hit a moving target. But even when they do kill a key player, three more spring up to take his place.

The question for me is: If the Mexican government cannot totally stop the cartels, can they get them to an equilibrium that will help reduce violence to civilians? STRATFOR thinks this is unlikely, as “there are also very few levers with which the Calderon government can apply pressure to help force the shifting pieces into alignment.” In the long run, perhaps it would be best if there was just one cartel just dominant enough to keep the others in line, but not so powerful that it threatens usurping the Mexican government. New Federation may be that cartel… someday. As STRATFOR points out, while the New Federation is making some progress, “Los Zetas’ tactical skills and arms make them unlikely to be defeated easily.”