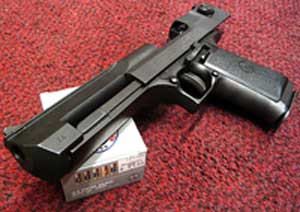 Major Nidal Hasan, accused of killing 13 people at Fort Hood Army base, has been described by former colleagues as “psychotic.” As more details emerge about Hasan’s troubled state, gun safety advocates are launching fresh attacks on a Senate bill they say would make it easier for mentally unstable veterans to buy firearms.

Sen. Richard Burr (R-N.C.) says his “Veterans 2nd Amendment Protection Act” will protect veterans’ gun rights. But the Brady Campaign to Prevent Gun Violence calls it a “dangerous” proposal that could allow “over 100,000 mentally incapacitated or incompetent persons” to buy guns—people who would previously have been barred from doing so by the Veterans Administration (VA).

With debate over Fort Hood still raging on cable news, one might think that Burr might try to quietly shelve the measure, whose co-sponsors include Sen. Jim Webb (D-Va.). Instead, Burr fired back at the Brady Campaign in an interview with Fox News, accusing its president, Paul Helmke, of using the tragedy to “exploit the senseless murder of American soldiers in the quest to secure personal triumph.”

Responding to Burr Thursday in an open letter, Helmke wrote, “it is hardly ‘exploitative’ to have an honest debate” about the proposal, which would cancel out key provisions of the Gun Control Act of 1968 and override standards used by the VA for nearly four decades.

Burr contends that, “under current law, veterans who have come to VA for help but who are determined to be unable to manage their own financial affairs are labeled as mentally defective and, on that basis alone, are denied their 2nd amendment rights.” Yet even the National Rifle Association disputes Burr’s description of the process by which veterans are ruled ineligible to own firearms. As the NRA notes in the current issue of its magazine First Freedom [PDF], “VA records are only reported to NICS [National Instant Criminal Background Check System] if a patient has been ‘adjudicated as a mental defective,’ a lengthy process that includes opportunities for hearings, appeals, etc.” (The NRA’s Institute for Legislative Action, which has not issued an official position on the measure, did not respond to Mother Jones’ requests for comment.)

According to a 2008 New York Times report, at least 121 Iraq and Afghanistan war veterans “committed a killing in this country, or were charged with one, after their return from war.” In addition, as Helmke also points out in his letter, “veterans are far more likely to die of suicide than non-veterans in the general population, with firearms the most common method of suicide among veterans.”

Nevertheless, several veterans’ organizations favor the measure, citing concerns that the VA might begin providing the Justice Department with the names of veterans seeking help for Post-Traumatic Stress Disorder. Patrick Campbell, the chief legislative counsel for Iraq and Afghanistan Veterans of America, has said that his organization backs the bill “in the hopes it will quell any fears veterans might have about seeking treatment for mental health injuries.”

In the wake of the Virginia Tech shootings, the Brady Campaign joined the NRA to support strengthening mental health background checks. This time around, it has offered to work with Burr’s office to find a more precise way to address his concerns about veterans’ gun rights. But it staunchly opposes the current proposal. As Helmke noted after the Fort Hood shootings, “this latest tragedy, at a heavily fortified army base, ought to convince more Americans to reject the argument that the solution to gun violence is to arm more people with more guns in more places. Enough is enough.”