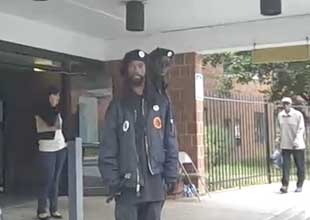 There’s a new investigation of politicization at the Justice Department. But this time, it’s not former President Bush’s appointees who are in the hot seat—it’s President Obama’s. On September 9, the DOJ’s ethics watchdog, the Office of Professional Responsibility, opened an inquiry into the department’s decision not to pursue charges against several men accused of voter intimidation at a Philadelphia polling place on Election Day last November. The Associated Press reported:

The department filed a civil complaint in January against three men, alleging two of them intimidated voters on Nov. 4 by standing outside a polling place wearing uniforms of the New Black Panther Party for Self-Defense. Justice officials later chose to drop the matter against two of the men and get an injunction against a third, prompting criticism from conservatives that the three had gotten off lightly as a result of political interference from the new Democratic administration.

I witnessed the incident at the Philadelphia polling station, and captured it on a video that became a YouTube sensation. You can see that video below the jump, as well as my account of what went down:

On Election Day, I was working as a paid videographer for the Philadelphia Republican Party. My job was to find and document voting irregularities. (I’d worked for Democrats, including Philadelphia mayor Michael Nutter, in previous election cycles.) Around midday, someone called and said that he was turned away from his polling place because a man with a billy club had told him that white people weren’t allowed to vote there. The caller refused to give his name, and I wrote his number and the polling place location down on a scrap of paper. (I don’t know who the caller was, because at some point during the next hour, I lost the piece of paper and had no idea whose cell phone I took the initial call on.) I caught a ride to the polling place and arrived 15 minutes later.

When I got there, I saw two men—later revealed to be King Samir Shabazz and Jerry Jackson, members of the New Black Panther Party for Self-Defense, a fringe black supremacist group—standing outside the building. They were clad in some sort of paramilitary garb, and Shabazz was holding a nightstick. I immediately reached for my camera. Here’s the video I shot:

There was a flock of GOP volunteer lawyers standing around with BlackBerrys, afraid or unwilling to approach Shabazz and Jackson. The second I saw Shabazz with the club, I walked straight toward him. When he asked me who I represented I said, “The University of Pennsylvania” (my alma mater), as I knew the New Black Panthers hated both the GOP and supporters of Obama, whom they view as a tool of the left.

My camera jammed toward the end of the first video, and I had to switch cameras. The police showed up a few minutes after I did, and that’s when I started shooting the second video:

The first pair of cops to arrive was a multiethnic team (one white police officer and one African-American), which I hoped would relieve the tension. Cops aren’t supposed to be at polling places on Election Day, so they tried to quietly resolve the situation. They pulled Shabazz and Jackson aside and asked Shabazz to leave (Jackson had the right to be there because he was a Democratic committeeman for that ward and apparently a poll watcher as well.) As Shabazz walked away, he shouted in my direction, where the GOP lawyers were also standing, “That’s why you’re going to be ruled by a black man!”

I knew I had some golden footage, so I didn’t stick around for long. The video probably went up about 2 hours after it was shot. (Later, a friend who works at Google emailed: “In the last two hours, ‘Black Panthers’ and related queries have become the #2 most searched terms on Google.”)

In January, the Justice Department opened an investigation into the incident. But in May the Justice Department decided against prosecuting three of the men involved in the case. Career DOJ attorneys, who interviewed me several times, had months of hard work building a case nullified. In the end, only Shabazz, who was holding the nightstick, faced consequences for his actions—an injunction that he not display a “weapon within 100 feet of any open polling location on any election day in the city of Philadelphia” until November 15, 2012. I was there, and that seems a bit light.