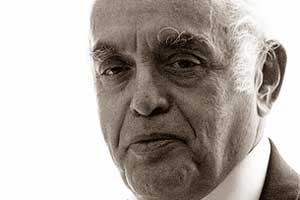 At the time, Robert Novak couldn’t have know that, despite a half century of covering Washington, one little line would ignite the scandal that would come to dominate his legacy: “Wilson never worked for the CIA, but his wife, Valerie Plame, is an agency operative on weapons of mass destruction.” Following the conservative columnist’s death yesterday at the age of 78, mentions of his role in outing the CIA operative were ubiquitous in the numerous obits commemorating his life.

Our DC bureau chief, David Corn, played a unique role in the Plamegate saga, too. Then working for the Nation, he was the first to raise the possibility that Bush administration officials, bent on smearing diplomat Joseph Wilson, had broken the law by leaking the identity of Wilson’s wife. Let’s just say that David’s role in breaking this news did not endear to him Novak, with whom he’d enjoyed a friendly enough relationship over the years. Over at Politics Daily, David recalls his interactions with Novak pre- and-post Plamegate:

I learned of the death of Bob Novak from an e-mail sent to me by an NPR reporter looking for a comment. And I felt awkward, for my last public exchange with the conservative columnist and TV pundit who relished his “Prince of Darkness” nickname had been an ugly one. There is, of course, the don’t-speak-ill-of-the-dead rule. But what could I say about a fellow who had blasted me on national television as an ideological hack?

There wasn’t always bad blood between us. Years earlier, as a substitute host on CNN’s “Crossfire,” I had come to enjoy wrestling with Novak. When I began that gig, though, he barely paid any attention to me before or after tapings, adopting an attitude that seemed to say, “Show me your stuff, kid.” He acted as if I were an irritant, not a sparring partner who deserved to be in the ring with him. But I didn’t expect much from Novak. For years, I had thought he used his column and cable appearances to do favors for conservative allies and to sully (sometimes unfairly) liberals. Eventually, he warmed up — well, as much as he could — and started pumping me for information on what Democrats and liberals in Washington were thinking. I hardly held any top-secret information in that regard, but we did what most political reporters in D.C. do when forced to spend time together: trade tidbits, gossip and half-stories. And in his 2000 book, “Completing the Revolution” (as in: the “conservative revolution”), he described me as a “bright, young, left-wing journalist.” (Given his age, I suppose someone in his early 40s was “young.”)

By 2006, Novak was describing David in a much different light. On CSPAN, he said:

Mr. Corn is a nasty piece of work — let me tell you that. And he was the one who really built this story up. He is in what I think is a deliciously ironic situation because he was one of the people — much more, I believe, than Chris Matthews — [responsible] for building this story up from the outset…

I was…saddened that Novak, who had admirably been a skeptic of the Bush-Cheney administration’s decision to invade Iraq, had now become an apologist for the Bush White House (and Rove) on the CIA leak story. He was miscasting facts and repeatedly refusing to acknowledge that the Bush-Cheney gang had tried to undermine Joe Wilson — and that this effort had included disseminating information about Valerie Wilson’s CIA employment. (By the way, the Bush White House issued the false statement that Rove was not connected to the leak — and never corrected itself.)

After this dust-up, I didn’t have much to do with Novak. His career certainly has entailed much more than the CIA leak case. So what to tell the NPR reporter? I noted that, ideology aside, Novak had been one of the most successful practitioners of insider journalism in Washington for decades, yet it seemed to me that he had too often allowed his bias to shape his reporting — as opposed to using his reporting to support his bias. But in its short piece, NPR didn’t have space for that. (I’m not complaining; three minutes is not much time.) Instead, NPR used my observation that for many people the CIA leak case “was an event that came to define” Novak. My hunch is that Novak realized that and hated it — and that’s why he came to dislike me so much, blaming the reporter for the facts reported.