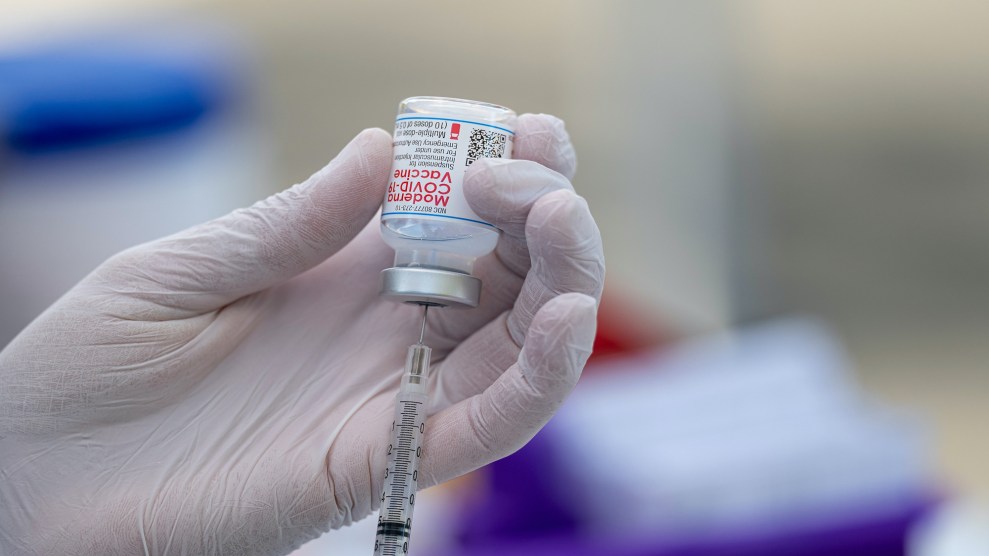 A health care worker draws up a dose of the Moderna COVID-19 vaccine in Novato, California.David Paul Morris/Bloomberg/Getty

As the Delta variant spreads across the country, and breakthrough cases among vaccinated people are on the rise, health officials in the United States are rolling out plans for booster shots—even as much of the world waits for their chance at the first shot.

The Biden administration announced that boosters should be available to those who have received the Pfizer or Moderna vaccine as soon as September 20. Studies are underway to determine the importance of supplemental doses for those who received Johnson & Johnson, with experts thinking boosters for the single-dose shot will likely be needed, too. Which means that more than 5 million Americans—with priority given to health care workers, nursing home residents, and elderly adults—might be eligible to receive third shots later next month, and even more Americans are soon to follow after that. Already, in Israel, extra doses are available to many immunocompromised individuals as well as people over 50; Germany, France, and the UK have begun to make plans to offer boosters this fall.

As wealthier nations race to roll out boosters, many global health experts have cautioned against the rush. Only 1.3 percent of people in low-income countries have received at least one dose.

Administering boosters in the US while much of the world cannot access vaccines isn’t just ethically dubious. Experts say this could drag the pandemic on even longer, especially while Delta and other variants continue to travel. As long as vaccination rates are low in other parts of the world, more robust variants will continue to crop up.

It’s possible that some of these evolutionarily fit viruses could evolve to escape immunity acquired through prior infection or vaccines. Biden’s former chief COVID-19 adviser, Andy Slavitt, explained it well in this thread:

COVID Update: The debate on whether Americans should be offered 3rd shots as boosters in not a simple one.

But it does present a very clear choice. 1/

Some experts say the boosters could delay the pandemic by at least another year:

Earlier this month, WHO Director General, Tedros Adhanom Ghebreyesus called for a global moratorium on vaccine boosters at least until September. On Monday he cautioned that “vaccine injustice and vaccine nationalism” in wealthier countries will allow more time for variants to mutate and spread. The organization’s Africa director, Matshidiso Moeti, blasted wealthy countries that have begun administering extra shots, saying the decision “makes a mockery of vaccine equity.”

While #COVID19 vaccine shipments seem to be taking off, Africa is encountering headwinds. Moves by some countries to introduce booster shots threaten the promise of a brighter tomorrow for Africa.

As some richer countries hoard vaccines, they make a mockery of vaccine equity. pic.twitter.com/fk4ChXFCye

Michael Ryan, the emergencies chief at the WHO, added that “we’re planning to hand out extra life jackets to people who already have life jackets while we’re leaving other people to drown.”

Pitting boosters against global equity is simply a “false choice,” said White House Press Secretary Jen Psaki. She noted that the US has donated more than 110 million vaccines to other countries.

What’s more important might be that five days after the initial announcement about pursuing boosters, the White House released data that showed that protection from vaccines against symptomatic infection wanes after six months. With that information available, some experts have argued, it would have been hard for the Biden administration not to justify boosters for Americans.

Even before Biden announced that the US will begin administering boosters, many Americans were taking extra inoculation into their own hands, often with a “mix and match” approach, despite WHO’s advice against making your own vaccine cocktail. The CDC reported that around 1.1 million people have already received unauthorized third doses of Pfizer or Modern vaccines.

But with a limited global supply of vaccines, Madhukar Pai, a global health researcher at McGill, said it really is a “zero-sum game.”

In many other countries, barely 1 million have been able to receive vaccines. In Cameroon, for example, a country with 26 million people, only a little over 395,000 have gotten vaccinated. Or take Bangladesh, one of the world’s most populous countries, where less than 10 percent of the population has gotten the jab.

“The most vulnerable everywhere in the world should be kept safe from COVID as soon as reasonably possible,” Jerome Singh, a professor of public health who specializes in ethics in global health at the University of Toronto told me.

Singh noted that previous policies, like the United States’ ban on exporting raw materials needed for vaccine production in April (which has since been lifted), had a “paralyzing impact” on vaccine availability worldwide.