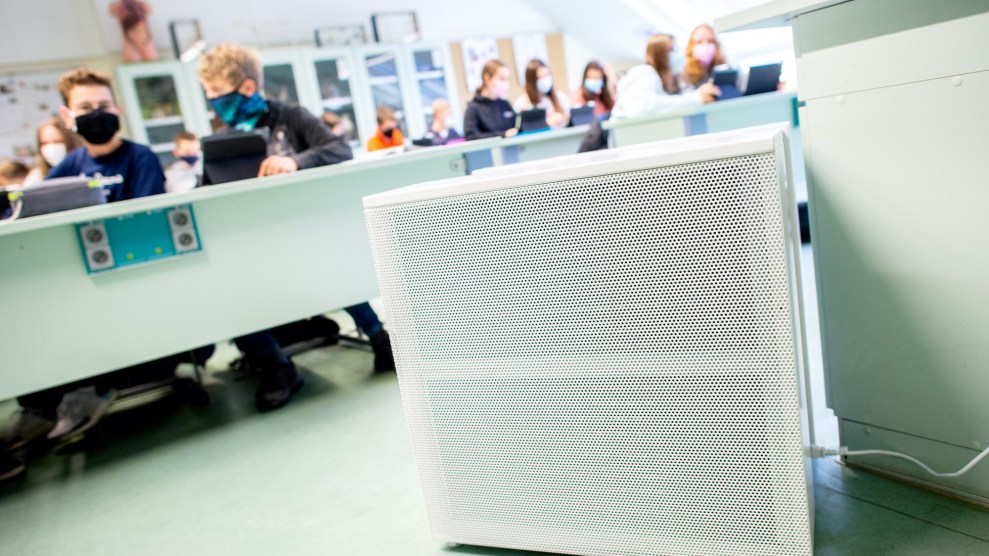 For months, we’ve known that the coronavirus spreads via airborne droplets, invisible molecules or globules of liquid that fall or hang suspended in the air whenever we exhale, talk, or sneeze. As more schools and businesses prepare to safely reopen, they’re looking for ways to purify indoor air—and the market has answered with a dizzying array of devices that go far beyond traditional HVAC (heating, ventilation, and air conditioning) systems and HEPA (high-efficiency particulate air) filters. Sellers of devices like bipolar ionizers, hydroxyl generators, and disinfectant foggers have claimed they can safely destroy the coronavirus or pathogens like it.

Across the country, schools are snapping up these purportedly air-cleaning products. The school district in Chilton County, Alabama, used funds from the CARES Act to buy their custodians agricultural backpack foggers that fill classrooms with chemicals. In Ocean City, New Jersey, schools put hydroxyl generators in nurses’ offices. Four school districts in the Lehigh Valley, Pennsylvania, have collectively spent more than $1.3 million to install bipolar ionizers in their HVAC systems.

But how many of these technologies are really snake oil, and are any them potentially dangerous? To find out, I spoke with Delphine Farmer, an atmospheric chemist at Colorado State University, and the coauthor of a forthcoming study on bipolar ionization. Lately, Farmer has been taking calls from school districts looking for advice on whether these new technologies can effectively keep students and teachers safe. “There’s a definite feeling that if all these other organizations are buying into this technology, then it must be okay,” Farmer says. “I’m like, “Nope, there’s no guarantee.'”

When we’re thinking about cleaning indoor air, what options do we have?

Think about if you’re cooking, and you’re making soup. If you have too much salt in your soup, then you can add more water, or you can add another flavor that kind of counterbalances the salt. You have these different techniques, the exact same way we have indoors. You can dilute the air—that’s where we pull in cleaner, outdoor air, opening windows and increasing ventilation. That’s just like adding more water to your salty soup. Another approach is to think about removing the salt—like finding a way to remove those particles and just filtering it out. For that we use HEPA filters.

And then you get to the other ways of doing this. And that’s where you start to get into what I would politely call “creative solutions” that take advantage of chemistry and developing new technology. But this is also where there’s a lot of potential unintended consequences, and unintended chemistry that can play a role.

What are these “creative solutions” that are on the market today?

So there are supposedly cleaning systems, which use ozone, or they use hydroxyl radicals—that’s another new one. What they’re trying to do is add chemistry that oxidizes organic molecules and the virus and destroys them. At the end of the day, it’s going to make molecules fall apart, or take on extra oxygen atoms, and then they change form. Eventually, if you make organic molecules react with the oxidant long enough, they’ll end up making carbon monoxide or carbon dioxide—which is safer than, say, coronaviruses.

But it’s hard to oxidize organic molecules all the way. Those are all the steps of chemical reactions that create smog in urban environments. There’s a lot of toxic byproducts. Take a big organic molecule like limonene—the molecule that makes anything citrus scented. It’s all over personal care products, and when you cook. It’s very prevalent in the indoor environment. You interact it with one of these ozone or [hydroxyl radical]generators, and you’re going to make formaldehyde.

Also, the oxidants themselves are quite toxic. Ozone is a well-known air pollutant in outdoor air, very well established to be dangerous. And then hydroxyl radicals are something that you would not want reacting with the tissues of your lungs.

Because they can damage the lungs?

They’re going to chemically react with your lung tissue, and certainly cause damage.

Is there any situation in which those are an appropriate way to clean indoor air?

In general, I can think of no situations where one would want an ozone generator in a house, or in a place where people are present. Same thing with these other oxidant generators. They’re either dangerous, or they’re operated in such a way that they’re not going to be effective.

What other devices are in this universe?

We’ve got another class of air cleaning devices that are foggers, or misters, or sprayers. There’s this thing called List N on the EPA webpage. It will tell you, if you take this commercial product, or you take this bleach mixture, it has this active ingredient, at this concentration. If you follow this set of instructions, and you mix it with water at this concentration, and you put it on a surface for this amount of time, it will destroy SARS-CoV-2.

“This rush to market these air cleaning devices is very concerning. They certainly haven’t been proven to be effective.”

Now what’s happened is a lot of companies are taking advantage of the fact that these types of chemicals will kill SARS-CoV-2. They then go and put them into sprayers or foggers. These are little devices that will release the chemical straight into the air, either as gases, or more frequently as little tiny droplets, little aerosol particles. The idea is that if you put enough of these, you spray them into a room, then you would kill any SARS-CoV-2 that’s in the air, in exhaled aerosol particles. And they would hit all the surfaces in the room and also destroy SARS-CoV-2.

It sounds like not a bad idea until you start thinking about it. First off, there’s a problem as to whether or not these work at all—because [according to] that EPA List N, you had to have a certain concentration and for a certain amount of contact time. Any of these airborne sprayers are certainly not meeting that concentration or contact time. So we don’t know that they work at all. Then there’s the problem that if you have people in the room, they are now going to be inhaling these droplets of these disinfectants—and some of them are quite toxic in and of themselves. Then you have that third issue—that these chemicals can actually do chemical reactions in the air, and on the surfaces of your building, and in your room. They can actually make really toxic compounds. This is very definitely the case for hypochlorous acid, which is basically a version of bleach. But this has become really popular in dentist offices.

This to me sounds like President Trump saying, Well, why don’t we just inject disinfectant.

Exactly. It’s “I hear that bleach kills SARS-CoV-2—so let’s drink it and put it everywhere and inject it.” It’s that level of logic. The thing that is scary to me is that this is a level of logic that has turned into products that are being very aggressively marketed.

Okay, so there are ozone and hydroxyl radical generators. Foggers, misters, sprayers that put disinfectants out into the room. What else?

The last major set of air cleaning devices are ion generators—these ionizers that are being incredibly aggressively marketed, especially toward schools. The idea behind them sounds great. If you pass air through one of these devices, it will ionize an array of molecules. What that really means is you’re either knocking out an electron, or you’re adding on a proton. You’re giving these little molecules a charge. These ions now will have a tendency to go towards anything that is grounded. I think of them as being quite sticky. They’ll hit surfaces, and they’ll just stick there. Or the particles might attract get attracted to other particles, and then they’ll stick together and become larger and larger and larger, until they fall out of the air.

That’s the theory. The practice is a little bit different. It’s actually quite hard to push enough volume through to actually make this system work to remove particles. There are not a lot of tests that have been done independently, that have shown that the system actually works to remove aerosol particles from the air.

The other problem is that you do chemistry when you have ions in air. Ions will react with other molecules in the air in a series of reactions, and, again, they’ll generate some oxidized organic compounds. Some of those are potentially more toxic than what you had in the first place. The problem with those ionizers is that we just don’t understand the chemistry of them. We don’t understand whether they make air toxic in concentrations we should be worried about, or if they don’t.

As an environmental chemist, I think about the precautionary principle, where you say, “Well, if this might do harm, and you don’t need to do it, then you just shouldn’t use it.” You have to prove that something is benign—that it’s not going to hurt the environment, and it’s not going to hurt people before you use it. And I think this rush to market these air cleaning devices is very concerning. I think we’re creating devices that might—not guaranteed—but they might create some some dangerous byproducts. And they certainly haven’t been proven to be effective.

I’ve seen lots of references to ultraviolet light, which seems to be maybe more recommended than these other techniques. Is that true?

Ultraviolet is pretty established. It’s expensive, but there’s some useful guidelines out there. The idea is that ultraviolet light is really strong, [it] breaks down DNA, and it will tear apart the COVID particles. It’s very effective as a germicide and quite well understood. If it is installed carefully and properly can be very effective. What you want to really be careful of is improperly installed UV, or anything that would expose you as an individual to it.