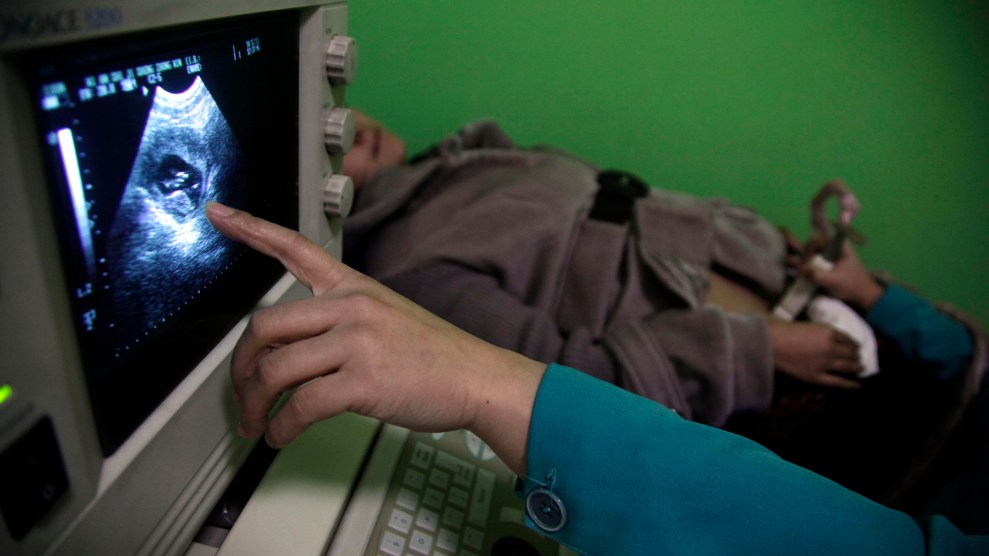 Last year, after the state of Texas temporarily banned abortions in a purported effort to slow the spread of the coronavirus, nearly 1,000 Texans crossed the border to access abortion services in other states. According to a new study published in the Journal of the American Medical Association, there were 1,752 fewer abortions performed in Texas last April (compared to the number performed in April of 2019). But 947 patients traveled to clinics in Arkansas, Colorado, Kansas, Louisiana, New Mexico, and Oklahoma to receive care. A representative of Planned Parenthood of the Rocky Mountains told Mother Jones that during the ban, they experienced a sevenfold increase in Texas patients in their New Mexico, Colorado, and Nevada clinics alone.

The ban stemmed from Texas Gov. Greg Abbott’s March executive order that required all procedures that were not “immediately, medically necessary” be postponed, theoretically to preserve PPE for frontline workers and save hospital beds for coronavirus patients. The state’s attorney general interpreted the order to include most abortion services, despite the fact that abortion providers require minimal PPE and, as Kari White, lead author of the study and an investigator for the Texas Policy Evaluation Project (TxPEP) said, “complications from abortion are incredibly rare, particularly those that require hospitalization.”

Abortion advocates said at the time that the ban was more political opportunism than genuine concern for public health. Texas lawmakers have attempted to rollback reproductive rights for nearly half a century—the pandemic was just their latest justification. “The stated reasons for prohibiting abortion during that time period were just not grounded in scientific evidence or typical medical practice,” she said. (Abortions were allowed to resume in Texas on April 22.)

But as per usual, the attempt to stop abortions from happening merely meant that they were happening elsewhere and in less safe conditions. In addition to finding that women were forced to cross state lines to get care, the study also found that second-trimester abortions—which are less safe than first trimester procedures—jumped nearly 61 percent after the ban was lifted because many women had to put off getting care.

Even though it only lasted for a month, the ban had a profound affect on many women. Dr. Bhavik Kumar, a physician at Planned Parenthood Center for Choice in Houston, said during the ban, his patients were desperately seeking help, calling clinics all over town. They were “calling the clinic every day, even driving up to the clinic, just to see if we were open,” he said.

“It was chaotic, it was confusing,” said Kumar, who also serves as the national medical spokesperson for the Planned Parenthood Federation of America. “There was an executive order, but because that went through the courts, there were a total of eight times that we either opened or closed, sometimes in the middle of the day.” When the ban was lifted in late April, Kumar’s clinic had a backlog hundreds of names long.

Last Monday night, her team made calls to pregnant people who had appointments scheduled in their Texas clinics to let them know their procedures were canceled, at least for the time being. “People were sobbing, people were begging for us to see them anyway,” she recounted. “‘Can’t you just figure this out?’; ‘What am I going to do?’; ‘Where am I going to go?’” Making those phone calls and hearing the desperation in the voices of would-be patients was gutting, she said. “We’re really concerned about these people’s mental health—it’s palpable,” even through the phone.

Now, her staffers have to make the calls all over again. “It’s absolutely cruel to say to somebody, ‘You have to continue your pregnancy against your will when there’s a pandemic,’” Hagstrom Miller said. “Those patients are just heartbroken.”

The pandemic also compounded the obstacles to abortion already in place in Texas. One woman told TxPEP researchers that she was unemployed during the pandemic when she learned she was pregnant. She had a mandatory ultrasound done, but had to postpone the abortion procedure because she couldn’t afford the cost out-of-pocket and Texas doesn’t allow patients to pay for abortion care using state insurance or Medicaid. But because the same medical provider has to perform both the ultrasound and the abortion, she couldn’t reschedule.

“They said, ‘No, you have to come in the next week and redo the whole process and get another ultrasound and do everything all over again.’ And I’m like, I don’t want to pay an extra hundred dollars,” she said. The woman, who was kept anonymous, decided to carry her pregnancy to term because she was overwhelmed by the logistics and increasing costs of her delayed abortion.

TxPEP researchers talked to her and nine other women who sought abortion care in late March and early April, who detailed the stress and risk they faced while trying to end their pregnancies. Another woman, pseudonymously named Maria Isabel, successfully had an abortion in south Texas, but only after nine weeks of rescheduling at multiple clinics in her city. By the time she was able to get an appointment she was past the gestational age limit for medication abortion, and had to pay $1,200 for a procedural abortion instead. Yet another woman was able to travel 700 miles to New Mexico for an abortion, but worried that she’d contracted coronavirus because she was feeling feverish on the drive home.

“It was stressful time for everybody, everybody was dealing with economic uncertainty,” White said. But to make matters worse, these women either had to wait a month for abortions to resume in Texas or risk contracting coronavirus while traveling across state lines. All of them reported stress, anxiety, or depression.