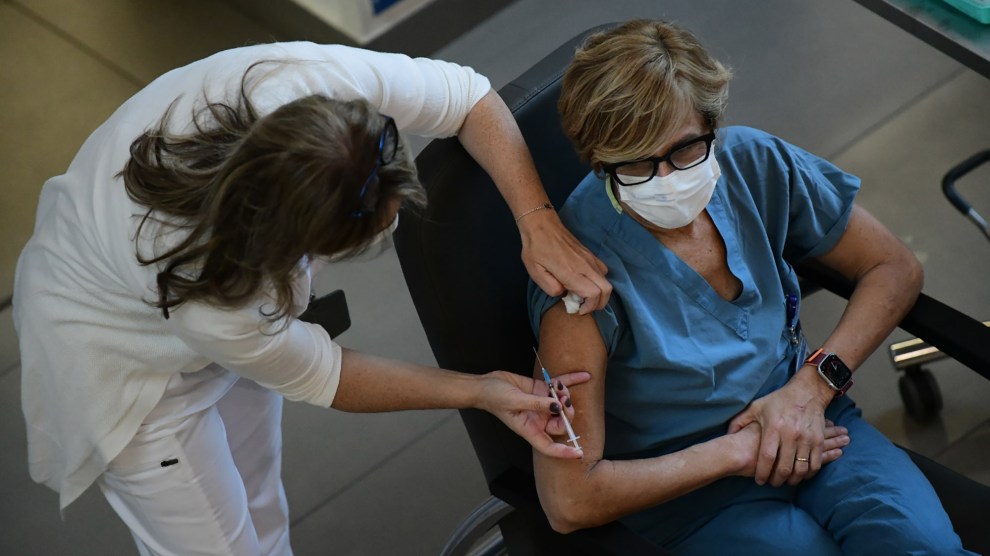 A federal advisory panel to the Centers for Disease Control and Prevention recommended Sunday that frontline workers—grocery store workers, teachers, day-care staff, police, firefighters—and adults aged 75 and older should be next in line for the coronavirus vaccine.

The recommendations follow FDA approval Friday of the second vaccine, from Moderna. The vaccine from Pfizer and the German company BioNTech was approved December 11. It’s hard to know for sure how many people have been vaccinated thus far, but the New York Times estimated Friday that the total was at least 128,000 people across the country, many health care workers since the first vaccinations took place on December 14.

"I hope this marks the beginning to the end of a very painful time in our history." pic.twitter.com/M0j1GxQeGC

Even as optimism around the COVID vaccines offer some hope, news from the United Kingdom is there to remind us that 2020 isn’t quite done with us yet. The latest: Countries across Europe are restricting travel from the United Kingdom as that country grapples with an apparent surge in cases resulting from what appears to be an even more virulent coronavirus mutation. “The new variant is out of control,” British Health Secretary Matt Hancock told the BBC on Sunday. “This news about the new variant has been an incredibly difficult end to, frankly, an awful year.”

The Washington Post reported that Austria, Belgium, Italy, Ireland, Germany, France, and the Netherlands all announced travel bans on Sunday, with other nations expected to follow suit. The new variant, the Post reported, apparently speeds transmission of the virus. Hancock said this week that it was “highly unlikely” that the new strain would fail to respond to a vaccine. Meanwhile, Reuters reported Sunday that US health officials are monitoring the new strain. As of Sunday afternoon, the US State Department advised travelers to “reconsider travel” to the UK, but the travel advisory did not ban it.

All of this is happening while Congress edges closer to a COVID relief deal, which reportedly will be voted on as early as Sunday night. The deal includes $600 payments to adults and children (an amount that will be reduced for incomes over $75,000 and eliminated altogether at $99,000 annually). It also includes enhanced unemployment benefits through mid-March, and some relief for small businesses. It’s unclear how the relief deal handles funding for vaccine distribution, but earlier in the week reports suggested that $6 billion would be included for this, a figure lower than what groups representing health departments say is needed, CNBC reported on Monday.