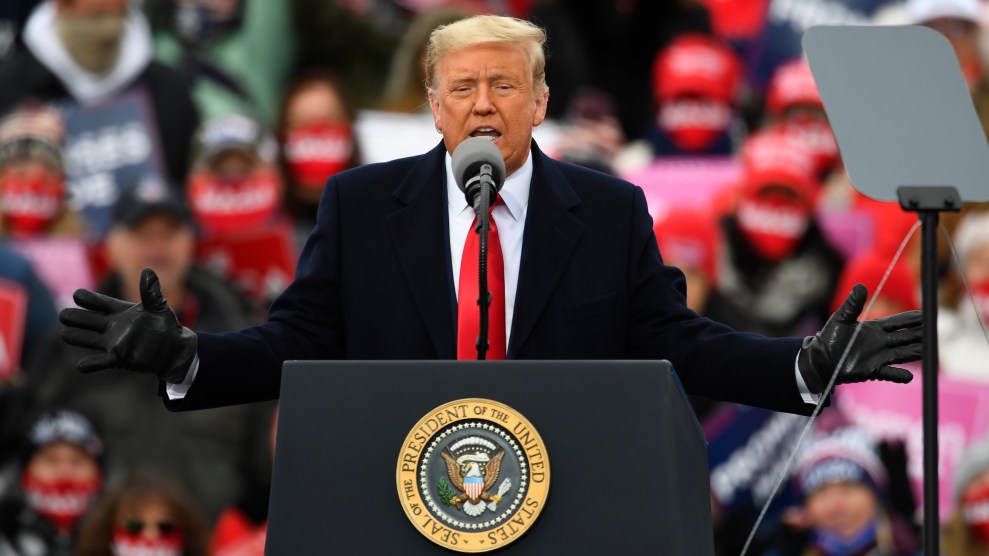 President Donald Trump during a rally at the Oakland County Airport, in Michigan on Friday.Scott Hasse/ZUMA Wire

As Americans head to the polls amid a massive surge in coronavirus cases and an increase in COVID-19 deaths, President Donald Trump is responding to the resurgent pandemic by brazenly lying about it. Campaigning around the country at rallies experts say are likely to spread the virus, Trump has taken to falsely asserting that the United States is “rounding the corner” on COVID. But even that lie pales in comparison to the whooper the president offered on Friday morning.

Over the last two weeks, the national average of daily deaths that local medical examiners attribute to COVID-19 has increased by 16 percent. That’s according to the New York Times COVID data tracking project, which is assembled by journalists compiling data directly from state and local health agencies. 1,004 deaths attributed to COVID were reported on Thursday, bringing the seven-day average (the average of reported deaths on each of the last seven days) to 811, up from 701 on October 15. Confirmed US deaths attributed to COVID now total about 229,000. (A separate metric, the CDC’s tally of excess deaths compared to how many people generally die during this stretch in a normal year, suggests that COVID caused far more deaths, nearly 300,000 through just early October.) Johns Hopkins’ COVID-19 tracking project, which separately compiles local data on the virus and reports slightly different numbers, shows the same general trend as the Times, an independent corroboration that deaths are in fact rising. Since September 12, COVID cases have been increasing throughout the US, with especially sharp rises in the Midwest. The spike in cases also means that deaths are likely to increase even further in coming weeks. People who die of COVID tend to succumb weeks or more after contracting the virus.

It’s possible that Trump’s tweet misstated a claim he and his backers have often made. Ignoring the absolute number of COVID deaths, they have focused on the fatality rate for Americans who have contracted COVID. And there is evidence that substantial improvement in treatment of the disease means a lower percentage of people who fall ill from the coronavirus are dying. But COVID deaths are increasing in spite of those advances.

Trump may also have been echoing an assertion made last night by his son, Donald Trump Jr. Appearing on Fox News, Trump Jr., twice, made the false claim that Covid deaths are down to “almost nothing.”

Jr. claims Coronavirus death numbers are down to “almost nothing” pic.twitter.com/NGMDLYkdsD

While remarking that “people are truly morons,” Trump Jr. helpfully cited the source of his error. “I put it up on my Instagram a couple days ago, because I went through the CDC data, because I kept hearing about new cases. But I was like, why aren’t they talking about deaths?” he said. “Oh, oh: because the number is almost nothing.”

Why isn’t the ACTUAL data from the CDC being discussed? Why is the media only talking about cases going up (because we are testing) more but the real numbers that matter namely the death rate are way down. Chart one shows actual deaths and the trend going way down. 2nd slide shows that the number of new cases and number of deaths per week are no longer correlated. In other words, while there have been increases in new cases per week, there has actually been a steady decrease in deaths per week. I guess they can’t rule you with fear if they tell you the truth. all data from: https://www.cdc.gov/coronavirus/2019-ncov/covid-data/covidview/10232020/specimens-tested.html and https://www.cdc.gov/nchs/nvss/vsrr/covid19/index.htm

The chart Trump posted does at first glance appear to show COVID deaths declining sharply. But as the Washington Post noted, that is because the chart excludes data on deaths in recent weeks. The actual CDC chart that Trump’s post cites says: “Counts will not include all deaths that occurred during a given time period, especially for more recent periods.” That means the chart does not show a decline in deaths. It shows a lack of data. Johns Hopkins and the Times, because they do not wait for CDC data, have more current information.

The Trumps’ false claims about deaths are just the most egregious among the deluge from Team Trump in the final days of the election. These falsehoods are part of an apparent, stunningly cynical presidential strategy of lying about the pandemic in the hope that some Americans will be fooled for long enough for Trump to eek out reelection, despite the probability that the misinformation will cause more sickness and death.

President Trump’s tweet this morning also repeated his familiar assertion that more tests result in more cases. That is literal nonsense, a failure to accept the principle, which babies learn, of object permanence. Something you can’t see still exists. People have COVID regardless of whether tests confirm they have it. Trump presumably intended to make the marginally less infantile claim that more tests result in the detection of more cases, so the spike in new reported cases—including about 91,000 on Thursday—is a mere result of more testing. But that, too, is wrong. Many states track daily tests, and those show that while testing is generally increasing, the rise in infections is far steeper.  “The data show that cases are going up. It’s not just a function of testing,” Admiral Brett Giroir, the Trump administration’s coronavirus testing czar, said in an interview on NBC’s Today show Wednesday. “Yes, we’re getting more cases identified, but the cases are actually going up. And we know that, too, because hospitalizations are going up.”

Out on the trail, Trump is still at it. At a rally in Michigan on Friday, he told backers that a vaccine will be available in “a couple of weeks.” It won’t. Dr. Anthony Fauci, the top US government infectious diseases expert, said on Thursday that health officials will know “sometime in December whether or not we have a safe and effective vaccine,” creating a chance to vaccinate high-risk Americans “by the end of December or the beginning of January.” But most Americans will have to wait far longer. And Fauci warned that life will likely not return to normal “until the end of 2021 at least.”