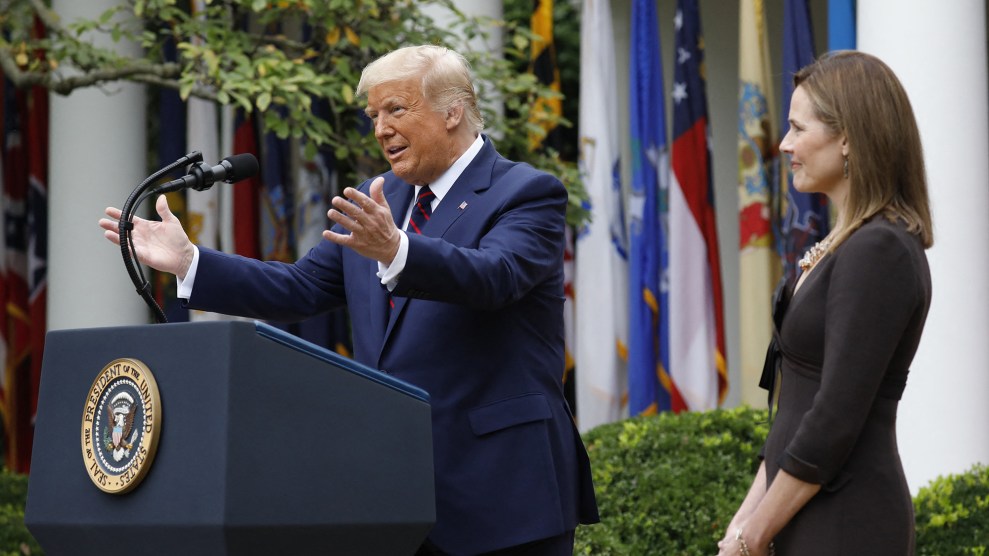 President Donald Trump introduces Judge Amy Coney Barrett as his nominee to the US Supreme Court on September 26, 2020 in the Rose Garden at the White House.Gripas Yuri/POOL via ZUMA

Mitch McConnell has the votes to confirm Amy Coney Barrett to the Supreme Court before November 3. Fellow Republicans are excited to cement a conservative 6–3 majority on the nation’s highest court. Democrats had struggled to figure out how to impede the rush to confirmation, but there was always one thing that could get in the way, and it appears to be working its way through the ranks of his party: the coronavirus.

By early Friday afternoon, it has become clear that not only have President Donald Trump, his wife, and top aide Hope Hicks contracted the virus, but so has Sen. Mike Lee (R-Utah). Lee attended the ceremony announcing Barrett’s nomination last Saturday, then proceeded throughout the week to attend multiple meetings on Capitol Hill, including a Thursday hearing with the Senate Judiciary Committee. Lee is a member, and it’s that committee that is slated to hold Barrett’s confirmation hearing in just 10 days. It will take a few days to learn if Lee infected any of his colleagues. Lee, who said he had allergy-like symptoms, is claiming he will emerge from his quarantine just in time for Barrett’s hearing.

Already, a battle is brewing over whether to delay the hearing due to the spread of the virus. The committee’s ranking Democrat, California’s Dianne Feinstein, put out the first shot on Friday, urging chair Lindsey Graham (R-SC) to, in the event of a needed quarantine, postpone the hearings rather than push ahead with a virtual confirmation. “It’s critical that Chairman Graham put the health of senators, the nominee, and staff first—and ensure a full and fair hearing that is not rushed, not truncated, and not virtual,” Feinstein said in a statement. “Otherwise this already illegitimate process will become a dangerous one.”

Early reporting on Capitol Hill reveals Republicans are also panicking about the prospect of Barrett’s confirmation being delayed by COVID.

A Senate GOP aide, on background, tells the Post that some Rs are now discussing asking Leader McConnell to "take the Senate out of session next week" before the ACB hearings start in mid-October.

"If some in the Republican caucus get sick, we are screwed," the aide says.

While McConnell currently has the votes to confirm Barrett, he doesn’t have many to spare. Graham could plow ahead with a virtual hearing for Barrett, a move that could further erode public trust in the Senate and the Supreme Court. But in hindsight, the situation suggests that McConnell and House Speaker Nancy Pelosi should not have declined to institute rapid testing protocols on Capitol Hill. This story of a wave in Congress is likely just beginning: on Friday, CNN reporters said that Republican members of Congress who had been on Air Force One with the president were walking and voting on the House floor without taking any noticeable precautions to protect their fellow lawmakers.

For months, the biggest threat to Trump and McConnell’s prospects of remaining in power and furthering their agenda has been the coronavirus. Their inability and refusal to protect the country or offer relief already put them on the ropes. Now their decisions to sacrifice their own safety on the altar of Trump’s scientific denialism threatens to land another blow.