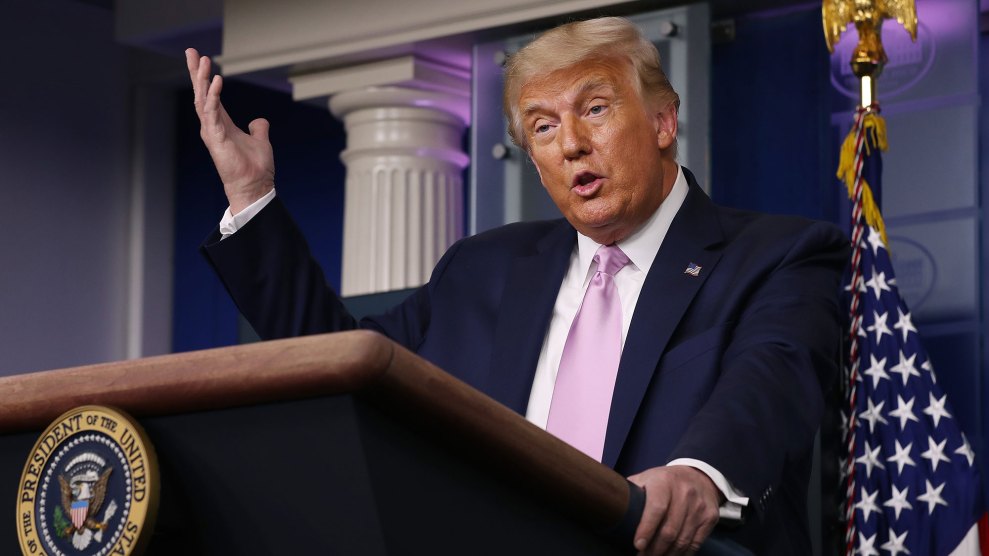 President Trump announced Sunday that the Food and Drug Administration has issued an emergency authorization for the use of convalescent plasma to treat COVID-19.

The emergency order, Trump said, will “dramatically increase access to this treatment.” While public health experts have said this treatment is a step in the right direction, clinical trials have not proved whether plasma treatments work.

In early August, the Food and Drug Administration was about to issue an emergency authorization for the use of blood plasma for COVID-19, but as the New York Times reported, that was put on hold after a group of top federal health officials argued that the data on plasma treatments was too weak. Use of plasma to treat COVID is controversial in part because no randomized clinical trials, the gold standard in scientific evidence, have been completed assessing the treatment.

Meanwhile, nearly 100,000 Americans with coronavirus have undergone plasma therapy. “In my mind, treating 98,000 people with plasma and not having conclusive data if it worked is problematic,” John Beigel, the lead author on the study that resulted in remdesivir being approved for COVID treatment, told Wired. “We should have a more robust data set before we give 98,000 people a product.”

Yet Trump has questioned the motives of the FDA, politicizing the move to pause the emergency authorization of plasma therapy. Saturday morning, Trump tweeted that “the deep state, or whoever, over at the FDA is making it very difficult for drug companies to get people in order to test the vaccines and therapeutics,” he said. “Obviously, they are hoping to delay the answer until after November 3rd.”

The deep state, or whoever, over at the FDA is making it very difficult for drug companies to get people in order to test the vaccines and therapeutics. Obviously, they are hoping to delay the answer until after November 3rd. Must focus on speed, and saving lives! @SteveFDA

On Sunday, Trump called the FDA authorization a “historic breakthrough on the fight against the China virus,” adding that the treatment has shown to reduce mortality by 35 percent. Trump said the FDA made the independent determination that plasma therapy is “safe and very effective.”

Food and Drugs commissioner Stephen Hahn called it “promising” and clarified that while the FDA has not approved plasma therapy per se, the authorization allows the agency to expand use of the treatment.

The antibody-rich plasma needs to come from people who tested positive for the coronavirus and haven’t exhibited symptoms for weeks. They also must meet the common criteria for blood donation.

My colleague Julia Lurie wrote about plasma therapy in May:

Plasma therapy is a century-old medical practice that involves transferring the antibody-rich part of the blood, a yellowish liquid called plasma, from people who have recovered from a disease into those struggling to fight it off. It was used in the early 1900s to treat measles and mumps, and, more recently, to treat other coronaviruses, like MERS and SARS. Early outcomes from patients in China suggest that it could serve as a treatment for COVID-19, though, as Dr. Arturo Casadevall, an infectious diseases expert at Johns Hopkins University, explained, the “coronavirus is a new virus, and whenever you’re dealing with a new entity, you need testing.” In early April, the Food and Drug Administration unveiled a national study to test those interested in receiving the experimental treatment. Under the best-case scenario, plasma could treat sick patients while a longer-term therapy, like a vaccine, is developed.

Of the treatment options floating around in the news, plasma is the only therapy that has been used for decades and is known to be relatively safe, says Casadevall. Plus, it can be implemented quickly because it doesn’t require any drug development: Theoretically, the beneficial, virus-fighting antibodies exist in the blood of most people who have recovered from the coronavirus.

This isn’t the first emergency authorization by the FDA since the pandemic began. The agency issued an emergency authorization for the malaria drugs hydroxychloroquine and chloroquine in late March. Trump himself touted the benefits of the drugs and said “A lot of good things have come out about the hydroxy. I happen to be taking it.” But on June 15, the agency revoked the order after it found the drugs “may not be effective to treat COVID-19” and their “potential benefits for such use do not outweigh its known and potential risks.”

More than 176,000 people in the United States have died and 5.6 million have tested positive for COVID-19, according to the latest numbers from John Hopkins University.