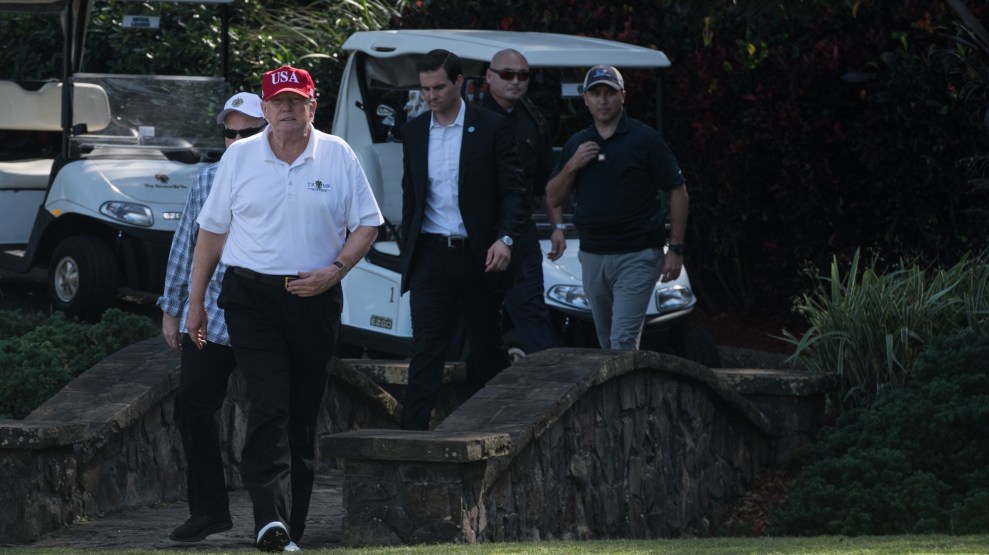 Donald Trump walks onto the green at the Trump International Golf Course in Mar-a-Lago, Florida, in December 2017.Nicholas Kamm/AFP via Getty Images

President Donald Trump, who in 2014 attacked Barack Obama for golfing during an Ebola outbreak that ultimately took the lives of two Americans, hit the links on Saturday as the number of America deaths attributed to coronavirus neared 100,000.

That happens to be a total that Trump, in one of his frequently revised predictions of the virus’ expected toll, has said it will not exceed. “It looks like we’re headed to a number substantially below the 100,000,” he said on April 10. (He notoriously had opined on February 26 that 15 cases reported cases in the United States “within a couple of days is going to be down to close to zero.”) There are now more 1.6 million confirmed cases in the United States, according to the New York Times, though there is no way to know the actual number, because, despite Trump’s claim on March 6 that “anybody that wants a test can get a test,” most people can’t get tests.

One hundred thousand deaths is also likely an undercount. State mortality figures compiled by the Centers for Disease Control suggest the ongoing pandemic has caused the deaths of somewhere between 33 to 60 percent more Americans  than the official figure attributed to COVID-19. Though coronavirus continues to take the lives of around 1,200 Americans each day, Trump has recently amped up an effort to push for states and churches to reopen, a position nakedly aimed at aiding his reelection hopes by reversing an economic collapse that has left 38 million Americans unemployed. His outing Saturday appears aimed at signaling “the worst is behind us and that America is ready to return to normal,” as the Washington Post‘s Philip Bump wrote. Mission accomplished. Now watch this drive.

Trump traveled Saturday by motorcade from Washington, DC, to Sterling, Virginia, locales in which stay-at-home orders leave golf off limits to regular residents. It was his first golf outing since March 8, but also his 250th as president. As he often does, Trump played at one of his own courses, a practice that helps promote his floundering hospitality business and forces the Secret Service to spend taxpayer funds at Trump properties.

Some pundits have consistently argued that Trump’s golf, and hypocrisy over golf, is relatively unimportant amid his policy failures. And indeed, his coronavirus record would be ripe for criticism even if it included no golf. But symbolism matters. And as the death toll mounts, golf is the symbol Trump picked Saturday.