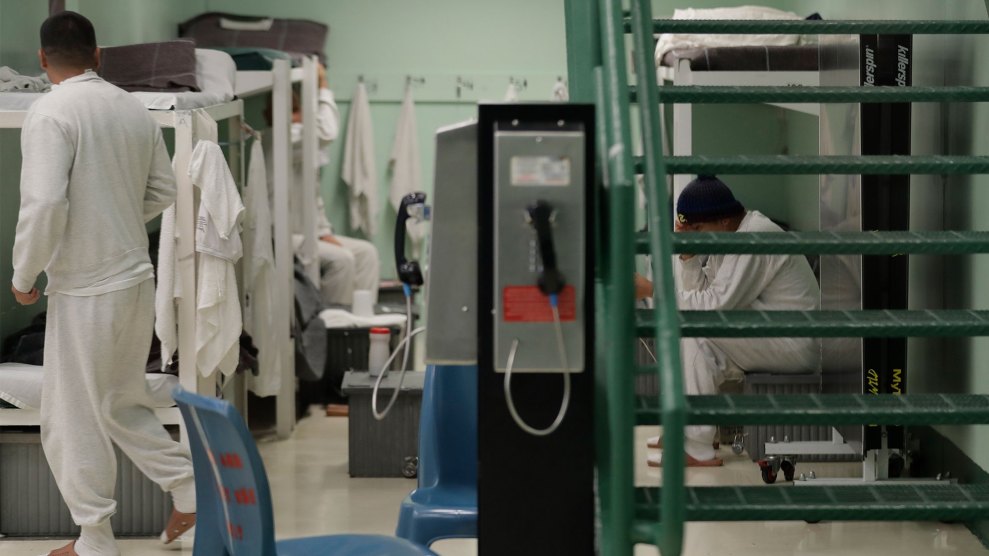 Update May 7, 1:30 p.m.:  ICE confirmed the death of a 57-year-old detainee in its custody who had tested positive for COVID-19. The man was originally from El Salvador and had entered the United States in 1980.

For weeks, the cases of COVID-19 among Immigration and Customs Enforcement detainees have been rising. Now, ICE has had its first COVID-19-related death in its custody. Carlos Ernesto Escobar Mejia, a man from El Salvador, had been hospitalized for over a week and died Wednesday at a San Diego area hospital, according to multiple reports.

The death was first reported Wednesday afternoon by the San Diego Tribune‘s Kate Morrissey, who spoke with Escobar Mejia’s family. ICE has not said anything publicly and did not respond to multiple requests from Mother Jones for confirmation.

I can confirm that an ICE detainee from Otay Mesa Detention Center has died from #COVID19. Story coming.

BuzzFeed News reports that Escobar Mejia “had hypertension and self-reported diabetes” and that he “had been denied a bond to be released from custody on April 15 by an immigration judge.” He was taken to a nearby hospital on April 24 after showing symptoms related with the virus. According to BuzzFeed, he was placed on a ventilator three days later.

“This is a terrible tragedy and it was entirely predictable and preventable,” said Andrea Flores, deputy director of immigration policy at the American Civil Liberties Union, in the email Wednesday afternoon. “Unless ICE acts quickly to release far more people from detention, they will keep getting sick and many more will die.”

Nationwide, ICE reported Wednesday that there have been 705 confirmed cases among detainees and 39 cases among employees at detention facilities. Otay Mesa, where the deceased detainee was in custody, has the highest number of coronavirus cases of any ICE detention center in the country; as of Wednesday, at least 132 people have tested positive for COVID-19 there. Otay Mesa is run by the private prison giant Core Civic.

ICE detains immigrants and asylum seekers in facilities across the country, usually keeping dozens of people in close quarters. Public health experts and immigrant rights groups have been warning for months that if the coronavirus entered these facilities, it could be deadly for detainees and for staff. Last week, two guards at an ICE detention center in Louisiana died after testing positive for COVID-19. A doctor recently told me and my colleague Noah Lanard that ICE’s response to the pandemic was a form of “torture.”

The ACLU is one of many organizations asking for the release of immigrants who are not a threat to public safety, especially those who could be medically vulnerable. In late March, the ACLU and the Southern Poverty Law Center sued the Trump administration to force their release. Members of Congress have also started to echo their call: Earlier this week, Rep. Veronica Escobar (D-TX) wrote a letter, along with 17 other members, urging ICE’s Acting Director Matthew Albence to “halt the spread of this deadly disease.”