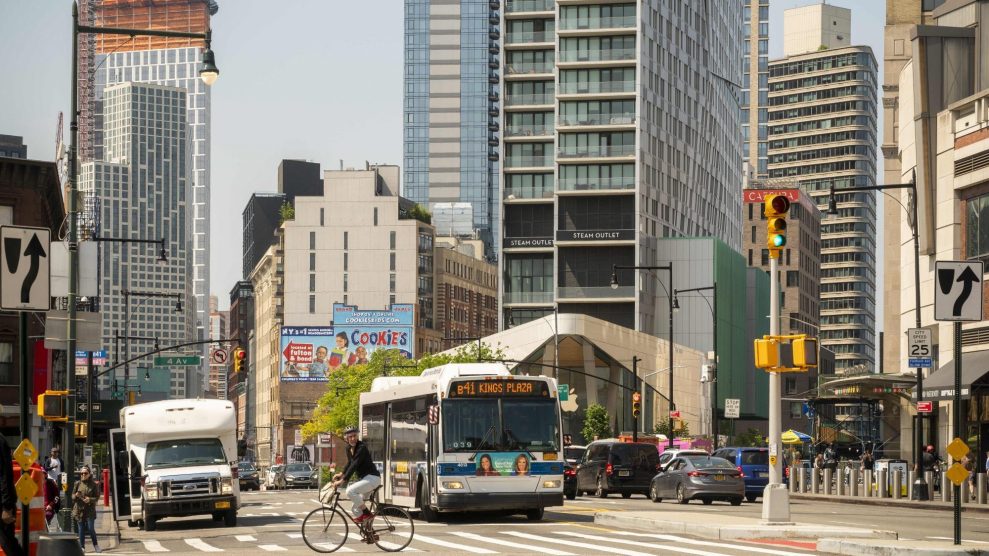 Trains and buses are running half-empty, abandoned by frightened commuters. Fortune 500 companies are fleeing downtown, saying they don’t want expensive, centrally located office space anymore. And their workers are moving to the suburbs or the Sun Belt, sapping school enrollment, emptying apartments, and leaving huge holes in the tax base.

Excuse me, I’ve been reading up on the American city at midcentury. What have I missed?

American cities are turning back the clock. Today, it’s the ’50s, when a sudden shift from transit to car traffic threatened to make cities unusable. Streets were jammed. Parking was a nightmare.

You know what happened next: American cities demolished neighborhoods in a fit of concrete and racism from which many never recovered. It was a time when urban leadership was defined by desperate groveling to retain the very people who had abandoned cities. Project after project, from downtown renewal to highways, was supposed to appeal to suburbanites. If they wouldn’t live here, could we at least make it easier for them to drive here? To work here? To shop here? To park here?

Another carpocalypse is looming as coronavirus shutdowns ease. Traffic is rebounding but mass transit is not—and won’t for some time, if the experience of cities in Asia and Europe are any guide. Once again, city leaders will be under enormous pressure to accommodate drivers.

We’ve been down this road before: For most of the 20th century, planners were convinced that faster, bigger roads and ample free parking would halt “decentralization” and save the centers where people worked. The results speak for themselves: Cities with overgrown highway networks and plenty of parking are, contrary to theory, now the ones that few people want to come to. Cities cannot beat suburbs at their own game. But they can destroy themselves in the process.

Cities cannot beat suburbs at their own game. But they can destroy themselves in the process.

You don’t need to go to Little Rock, Arkansas, or Newport News, Virginia, to see what cars did to cities. You can also take a deep breath in Chicago, which, because everyone stopped driving for six weeks, has enjoyed the cleanest air in two centuries. Or you can go to the Bronx, where highways created some of the highest concentrations of respiratory health conditions in the country. That may or may not be related to the borough’s status as the epicenter of the pandemic.

This is likely only the first of history’s echoes. Cities are broke, office districts dormant, services cut to the bone. And wealthy white families will, in some number, move to the suburbs, sapping City Hall’s coffers when they go. Metropolises may get the gridlocked ’50s and the bankrupt ’70s all in six months.

You know what happened after that, too: “Law and order” policing exacted incalculable harm on black and Hispanic neighborhoods. School integration was abandoned to appease reactionaries in dwindling white ethnic communities. Housing integration too. Politicians plowed tax dollars into prestige projects like convention centers, stadiums, and corporate retention, while health clinics and libraries starved.

There’s a pattern here: Sacrificing the wellbeing of those who don’t leave the city to cater to those who might—or worse, those who already did.

Will cities repeat this tragedy, now, in the 2020s? They should look further back.

In the early 20th century, when cities were filthy places swerving from one calamity to the next, the working classes traveled to amusement parks to see theatrical fireworks shows called pyrodramas. One particular subset of these was dedicated to firefighting feats, a subject that would have held considerable interest for workers familiar with catastrophes like the Triangle Shirtwaist Factory fire of 1911 or the Great Chicago Fire of 1871. The architect Rem Koolhaas wrote of one production at Coney Island’s Dreamland Park, in which a burning city block was saved in the nick of time by heroic firefighters. It seemed to suggest a permanent condition of the metropolis, he wrote in Delirious New York, where “an astronomical increase in the potential for disaster [is] only just exceeded by an equally astronomical increase in the ability to avert it.”

In reality, the firefighters don’t always arrive on time. But Koolhaas’ description neatly captures the big city’s intoxicating mix of fragility and resilience. Vulnerable to blows of terrorism, hard to get on the ropes. Uniquely susceptible to an epidemic like cholera, but also capable of reversing a river to avoid it or seizing vast tracts for public parks to ameliorate it. Stricken by a viral pandemic, but with the world’s best hospitals to fight it. And right this moment, confronted by a threat that seems to threaten their very reason for being … and with millions of smart people ready to do what it takes to defeat it.

It will have to be something more creative than letting gridlock swallow the metropolis as residents avoid transit or flee for the ‘burbs. “If San Francisco retreats in a fear-based way to private cars, the city dies with that, including the economy,” Jeffrey Tumlin, who directs the city’s transit agency, said in a recent interview published on Streetsblog SF “Why? Because we can’t move more cars. That’s a fundamental geometrical limit. We can’t move more cars in the space we have.”

One of the pandemic’s frightening effects is to expose a distressing lack of imagination about how to reinvent the places we live.

We can do a lot with space: Let restaurants, shops, and storefront churches take over adjacent parking spaces. Give people someplace to wash their hands. Get homeless people into vacant hotels. Open the streets for bicycles, scooters, wheelchairs, runners. Let vulnerable people have a car on the train. Let residents live closer to jobs, and bring services closer to where residents live.

We can do a lot with time: Work teams that don’t share hours in the office in case someone gets sick. Public exercise hours blocked out for seniors. Staggered hours at schools and government offices to flatten the rush-hour curve, reducing crowding on transit and traffic on roads. Freight dropped off and garbage picked up at night. Temporal distancing to go with the 6-foot rule.

Not all the odds are against the city, after all: Suburbs, too, have offices with elevators. They have crowded school cafeterias. They have mind-numbing traffic, and dying malls that fund their services.

The pandemic will pass. But in the meantime, one of its frightening effects is to expose a distressing lack of imagination about how to reinvent the places we live. (To take an extreme example of thinking creatively, Bogotá had men and women switch off days going outside.) That includes both short-term interventions, like buying pandemic-priced land for future affordable housing, and long-term ones, like forcing suburbs to pay their fair share. The system, we can now see, was broken all along. Why did we design the city to resist terrorism at the expense of public health? Why did we punish debtors by turning off their water, or decide that rich people can leave jail but poor people must remain, or use our public powers to make it so easy for landlords to throw tenants out on the street? We didn’t have to. The pyrodrama is raging, but the firefighters, actually, spend most of their days dealing with homelessness and drug addiction.

There’s only one sure thing: Make the city, even in its muted state, someplace people still want to live. If it’s not for you, someplace else will be.