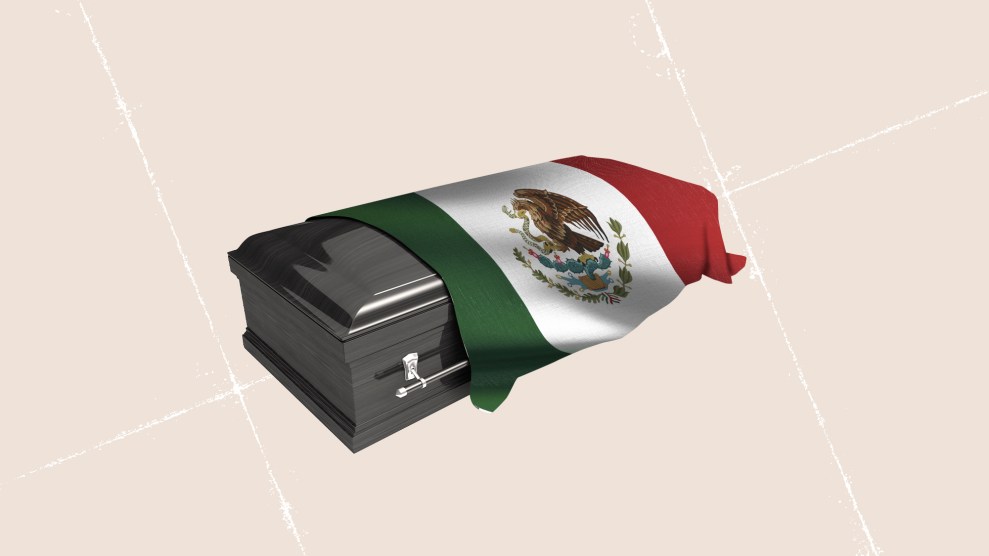 There’s a verse in the iconic Mexican song “México Lindo y Querido” that translates to something like this: “My dear and beautiful Mexico, if I die far away from you, let them say that I’m sleeping, so they’ll bring me back to you.” The mariachi ballad, made famous in the early 1950s by legendary singer Jorge Negrete, speaks to that human desire to be buried in your homeland, near your family and ancestors—a last wish that, thanks to the coronavirus pandemic, has become that much harder to fulfill.

As of May 5, more than 660 Mexican citizens had died from COVID-19 in the United States, but only one body had been repatriated to its final resting place in Mexico, according to a Mexican government spokesperson. Urns containing ashes “have left” the United States on their journey south, the spokesperson added, though he couldn’t say exactly how many. By comparison, nearly 47,000 remains were returned to Mexico from the United States from 2010 to 2019—an average of roughly 375 a month.

“Under normal circumstances, [repatriation of remains] can be done with a certain ease, but this is an unusual situation,” says Felipe Carrera, head of the Consular Protection and Legal Assistance Office at the Mexican Consulate in Los Angeles. “This epidemic has truly complicated this process.”

“This epidemic has truly complicated this process.”

Families who plan on returning a loved one’s remains to Mexico must now navigate a number of coronavirus-specific restrictions on both sides of the border. Last month, Mexico’s Office of Foreign Affairs updated its repatriation guide, which now reads, “If the deceased is a COVID-19 victim, local authorities may require special procedures for preparing and releasing the remains.” There also are paperwork delays due to the limited hours and staff at consulates and government offices in the United States and in Mexico. And beyond that, many commercial airlines prohibited the transportation of caskets carrying COVID-19 victims.

Perhaps not surprisingly, the updated guide from the Mexican government says that “some authorities recommend or require cremation for health reasons” and that the Mexican Health Ministry has said it’s “preferable to cremate the remains, as there is no risk in handling the ashes.” (While there is little research on how long the virus survives on dead bodies, a European Centers for Disease Prevention and Control report notes that the virus may live on surfaces for seven days, and that there is a possibility of infection when coming in contact with bodily fluids, clothing, or surfaces touched by the deceased.) Still, there have been delays in cremation services over the past month due to increased demand, and conversations around cremation can be uncomfortable and complicated, says the LA consulate’s Carrera, who often hears pushback from families who want to have a more culturally traditional funeral and choose burial over cremation.

“The trauma of losing a family member right now is even larger, so families are having a tough time dealing with this emotionally complicated situation.”

It’s a logistically complicated situation, as well. In a pre-pandemic world, this is how the repatriation of remains to Mexico would normally work: First, family members would contact the nearest Mexican consulate to where the person died and provide the deceased’s birth certificate. The family then would be interviewed and asked to provide details of funeral homes in the United States and Mexico, and the location of burial. Local authorities in the US would provide a death certificate as well as an embalming or cremation certificate. At that point, the local US health department would issue a transit permit for the body or ashes. Once there had been a sign-off from local health and records departments, embassies and consulates in the United States would have to issue their own transit permit, so the remains could arrive in either Mexico City or Guadalajara, Mexico’s second-biggest city. Often, funeral homes in Mexico arrange for the transport of the remains from there.

Not only is the process complicated, but at $900 to $2,200 to transport urns or caskets back to Mexico, it can also be cost-prohibitive for some families. Carrera notes that the Mexican government has earmarked funds for the last two decades to assist families who can’t cover the costs. He works directly with families who need this support and says that the LA consulate had about 300 of those cases in one year. Last week, Mexican President Andrés Manuel López Obrador added roughly $20 million to the assistance fund.

The cost, the logistics, and the public health risks of a funeral service can easily become secondary when grieving the loss of a family member, even more so if the deceased had a last wish to be buried in their home country—as Jorge Negrete did. The famous crooner died in Los Angeles in 1953, just two years after he first recorded “México Lindo y Querido.” His journey back to his homeland wasn’t a simple one—there were paperwork backlogs and flight delays—but when his body finally arrived in Guadalajara, half a million people turned up to pay their respects at his funeral service, while mariachis played the songs he loved so much.