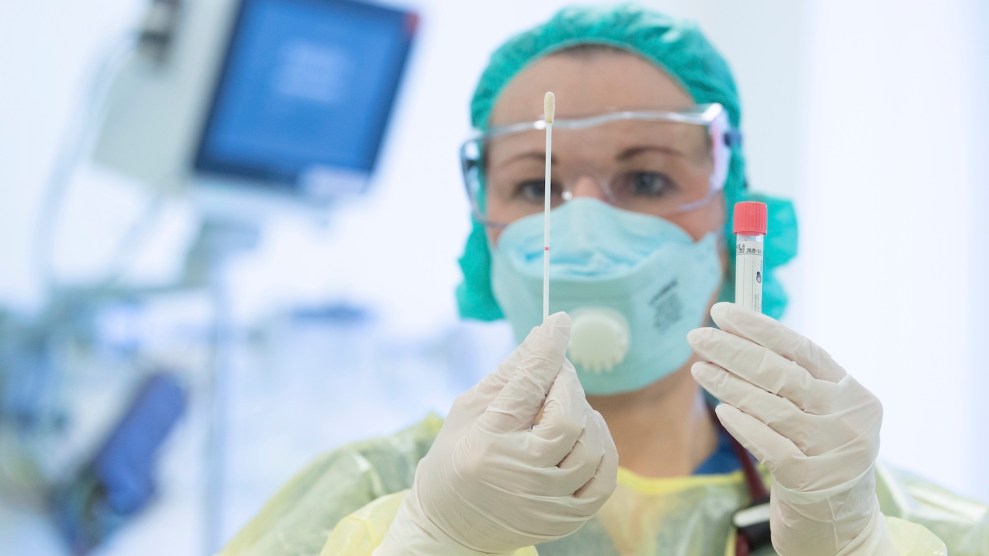 Despite President’s Donald Trump’s bluster, tests for the coronavirus remain in short supply. And we likely won’t contain the virus until healthcare providers can dramatically scale up testing. One major obstacle: a shortage of swabs, which clinicians need to gather samples from patients’ noses and throats to determine if they’re stricken with COVID-19.

These aren’t ordinary Q-tips. According to the Centers for Disease Control and Prevention, they have to be tipped not with cotton, which is used for over-the-counter ear swabs, but with with synthetic fiber. And they’re about six inches long. (This video shows how swabs like this are typically used.)

Two companies supply the great bulk of medical-grade swabs to the US market, Wyatt said: Maine-based Puritan, and Copan Diagnostics Inc., located in the COVID-19 hotspot of Lombardy, Italy. Both companies say they’re ramping up production, but it hasn’t been enough. And as of now, Wyatt says, there’s no clarity on when the shortage will end. Meanwhile, COVID testing is just now ramping up across much of the globe, including India, a country with more than four times the population of the United States.

As they scramble to ramp up production, swab makers like Copan and Puritan have been forced to ration the product, supplying hospitals based on what they use in a normal year, Wyatt said.  For example, she said, swab makers may tell a hospital buyer “you’re getting 80 percent of your historical usage—and historical usage reflects a normal flu season,” she said. “But with the COVID-19 spike, that’s not nearly enough to meet what [hospitals] need.” Hospitals “aren’t seeing relief,” even as the demand for testing “just keeps growing and growing,” Wyatt said.

I wondered whether big companies that make cotton-tipped swabs for the household market could be enlisted to rig their factory lines to produce medical-grade COVID-19 swabs. A spokesperson for Unilever, maker of Q-Tips, said the company could not retrofit its machinery to make medical-grade swabs.

Meanwhile, a 3D printing company called Formlabs has jumped into the breach. A spokeswoman for the company, which is working on a design from a team of physicians at the University of South Florida Health, says it will “soon” be able to pump out about about 100,000 COVID-19 testing swabs daily at its US Food and Drug Administration-registered print farm in Ohio. Hospitals equipped with Formlabs printers will be able to produce them as well, the spokeswoman said. But she declined to give a timeline on when Formlabs would begin delivering the product. When it does, she wrote in an email, “we believe that any number of swabs we produce will provide relief to healthcare providers in need.”