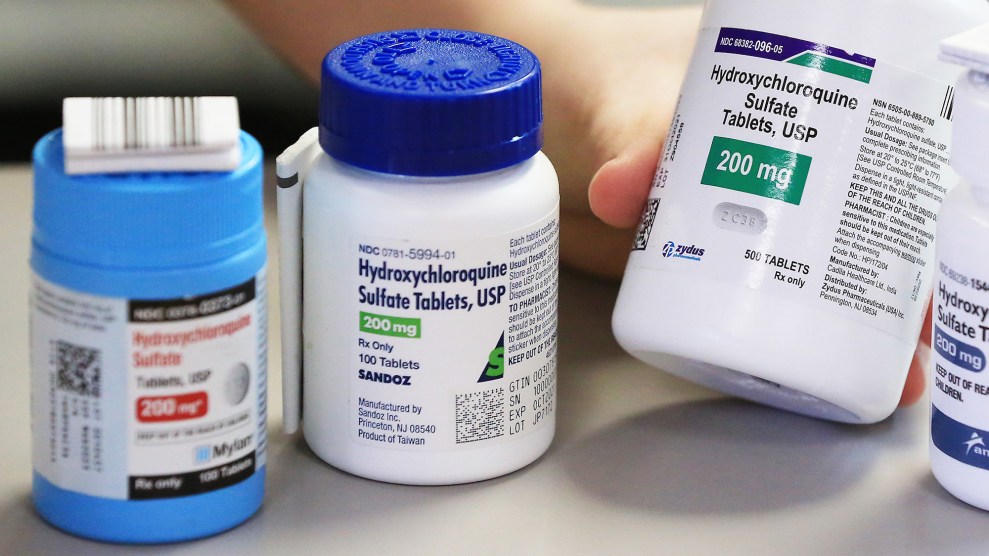 Utah residents may be lukewarm on President Donald Trump—the president leads Democrat Joe Biden there by only five points, a shocking number in such a reliably red state—but Utah has proven to be an enthusiastic booster of Trump’s favorite coronavirus miracle cure, the anti-malaria drug hydroxychloroquine. On March 21, a group of drug promoters in the state held a press conference to advocate for its use to treat Covid-19, claiming it could practically raise the dead, despite the fact that there’s no evidence that it works, and plenty of evidence that it can be dangerous to some people.

“There are responses that are equivalent to Lazarus—literally the biblical Lazarus—people almost dead coming back,” physician Kurt Hegmann, director of the Rocky Mountain Center for Occupational and Environmental Health at the University of Utah, said at the event.

Ten days later, the state spent $800,000 to purchase 20,000 doses from a local pharmacy chain, Meds in Motion, whose owner had been promoting the drug to state officials for weeks. The state legislature planned to set aside $8 million to buy 200,000 more doses to distribute free of charge to anyone diagnosed with COVID-19. Experts warned that the purchase was a waste of money given that the drug hasn’t been proven to work in treating the disease.

Eight million dollars for pharmaceuticals is a lot of money in a state that ranks dead last in per-pupil public school spending and spent most of the last decade refusing to expand Medicaid under Obamacare, even after state residents passed a ballot initiative demanding the expansion.

Utah House Democrats were suspicious of the GOP state officials’ enthusiasm for the unproven drug. They released a press statement criticizing the purchase, noting that their GOP colleagues had been pushing to buy the drugs from Dan Richards, the owner of Meds in Motion, who had amassed huge quantities of the raw materials needed to compound the drug and now wanted the state to buy his stash. Citing a recent study showing that hydroxychloroquine may endanger coronavirus patients, the state democrats said on April 21, “[O]ur colleagues quietly pushed the state to buy the stockpile of Dan Richards of Meds In Motion, a pharmacist lobbyist, with precious taxpayer dollars to compound the unproven drug without public scrutiny.”

“There is absolutely no need for us to spend money on this drug now,” they added. “It is also not clear how the decision to use state money was made, or where the money is coming from.”

Nonetheless, Utah officials moved forward, urged on by state Senate President Stuart Adams, who had appeared at the March press conference with Richards and the other drug promoters. But on Friday, after the FDA warned against negative impacts of the drug, Governor Gary Herbert announced that the state would not purchase any more hydroxychloroquine. He claimed to have no idea how the first batch got procured by his administration, which issued the no-bid contract under emergency procurement rules enacted because of the pandemic.

The 20,000 pills haven’t yet been delivered to the state health department, so Herbert suggested that the state should get a refund. “That’d be nice if they just said, you know, we had a miscommunication here and we’re apologizing and here’s your money back,” he said at a news conference Friday.