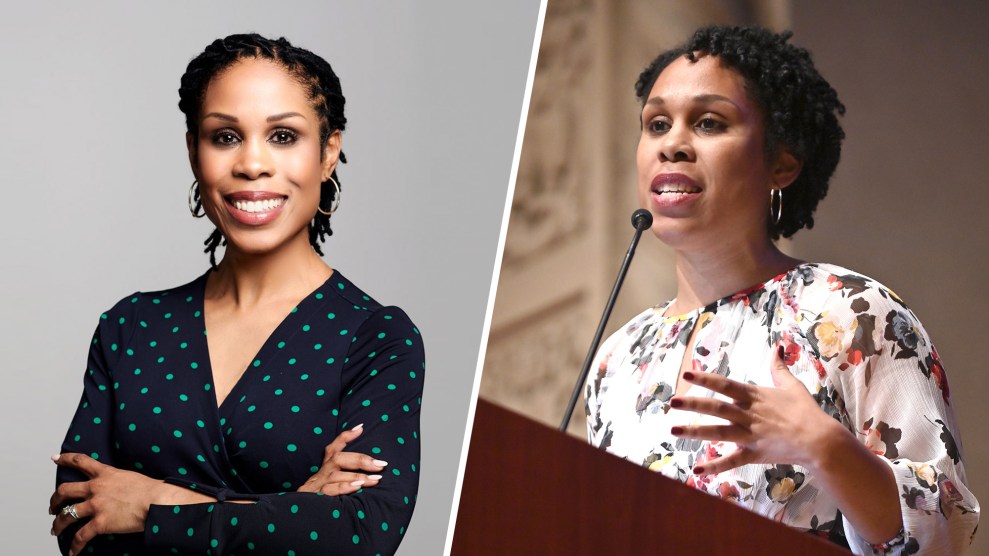 Doctors Uché and Oni Blackstock have spent the majority of their professional lives as rarities. For starters, they’re Black women; only 2 percent of physicians identify as Black and female. They’re also fraternal twins. The story of the Blackstock sisters has been the stuff of plenty of feel-good profiles over the years: In 2006, for instance, the New York Times ran a piece in the real estate section on their hunt for separate apartments in the city’s notoriously competitive real estate market. But now, the sisters have yet another thing that binds them together: They’re both on the front lines of New York City’s fight against the coronavirus pandemic.

Dr. Uché Blackstock is a board-certified emergency medicine physician who is the founder of Advancing Health Equity, a racial equity consulting practice that helps train health care organizations in unconscious and structural racism. She also works part-time at an urgent care facility in central Brooklyn. Dr. Oni Blackstock is an assistant commissioner with the New York City Department of Health and Mental Hygiene, where she oversees the city’s HIV intervention work.

“Our experiences definitely complement each other,” Uché told me this week. “I’m on the ground, whereas my sister is at the policy-making table.” “I see patients as well,” Oni told me in a separate phone call. “But because I’m involved in our health department’s response, I’m working from home and doing televisits.”

The sisters are also doing critical work to shape how the city responds to a virus that is disproportionately infecting and killing people of color: 34 percent of fatalities in New York have been Latinos, who make up just 29 percent of the population, while 28 percent of fatalities have been Black New Yorkers, though they make up just 22 percent of residents. Across the country, places like Chicago and St. Louis have also reported disproportionate rates of death among people of color. As the Blackstock sisters see it, COVID-19 is as a “pandemic of inequality.”

Thinking about the parallels between #HIV & #COVID19 and what is most similar is:

Remembering that “epidemics track along the fissures of society” paraphrasing @DrMaryTBassett

“We usually see patients with mild symptoms—cuts, chest pain—but the severity of those symptoms have definitely increased,” Uché explained to me, “and nearly all of the patients I’m seeing are Black and Brown.”

The twins were exposed early in life to the tragedy of long-standing racial disparities in health care. They were raised in Brooklyn by their mother, Dale Gloria Blackstock, a physician at SUNY Downstate who graduated from Harvard Medical School in 1976—an early participant in the school’s affirmative action program, Uché later wrote in the Chicago Tribune.

On this day, I honor all the women physicians who have come before me, like my mama.

Here’s a pic circa 1978 at our baptism. Our exhausted mama, then an Internal Medicine resident, holding @DrOniBee and me. 🙏🏿 pic.twitter.com/cs8NyUvemi

“We wanted to be just like her,” Uché later told Harvard Magazine. “We knew that she was very dedicated to her patients and that she really reaped a lot of joy from being a physician. It was impossible for that not to rub off on us.”

One of my favorite pictures of all time. Our mother signed us up for Suzuki violin class when we weren’t even 3 years old yet. She even took lessons herself to play with us. I still get teary-eyed thinking about how she wanted us to have experiences that she never had. pic.twitter.com/2moGRBKgMf

The sisters attended the competitive Stuyvesant High School, earned undergraduate degrees at Harvard, then spent a year apart, teaching in different cities—Oni in Washington and Uché in Chicago. Then they both enrolled in their mom’s alma mater, Harvard Medical School.

They’ve watched as the United States confronts the devastating reality of the coronavirus pandemic, and racial disparities in mortality and treatment continue to rise. In Louisiana, 70 percent of the people who’ve died from COVID-19 have been African American. In Milwaukee, Black people have tested positive for the virus at double the rate of white people. And in Chicago, 72 percent of people who’ve died of the virus have been Black. Meanwhile, officials in some of the hardest hit states—California, Washington, New York—have yet to release statewide data on the race of its coronavirus patients, according to the New York Times.

Uché knew early on that the guidance issued by the Centers for Disease Control and Prevention to medical professionals on the coronavirus wouldn’t be enough to protect her mostly Black patients. The CDC initially discouraged doctors from testing every patient who exhibited symptoms of the virus—fever, cough, difficulty breathing—if they had not recently traveled to a COVID-19 hotspot, which until early March only included China, Italy, and Washington state. Uché recently told Slate that most people who answered “yes” to the question of having traveled were white. Making matters worse, Uché explained in that interview, is the deep-rooted mistrust of medicine in Black communities, thanks in part to instances like the Tuskegee experiment, a once-secret government study in which doctors purposefully withheld treatment to study the long-term effects of syphilis. In her interview with Slate, Uché described her heartbreaking interactions with patients: “What I often tell my patients is, ‘Please, if your symptoms worsen, anything changes, please come back,’ because I also know that they probably are used to clinicians not taking their concerns very seriously.”

Meanwhile, Oni has been crafting public-facing policy on how to slow the spread of the virus, including a sex-in-the-time-of-coronavirus tip sheet that went viral.

✅You are your safest sex partner; next safest is a partner you live with

Now, the twins are bringing a career’s worth of experience in health care and fighting racial inequities to bear on the coronavirus—and they are relying on each other to get through. “We’re having some similar experiences but also very different experiences,” Oni told me. “And I think my role is really to try to hold space for her because there’s a lot of trauma that she’s experiencing just seeing patients coming in very acutely ill.”

“If you don’t protect the most vulnerable people of your society, then everyone will be negatively affected by COVID-19,” Uché told Slate.