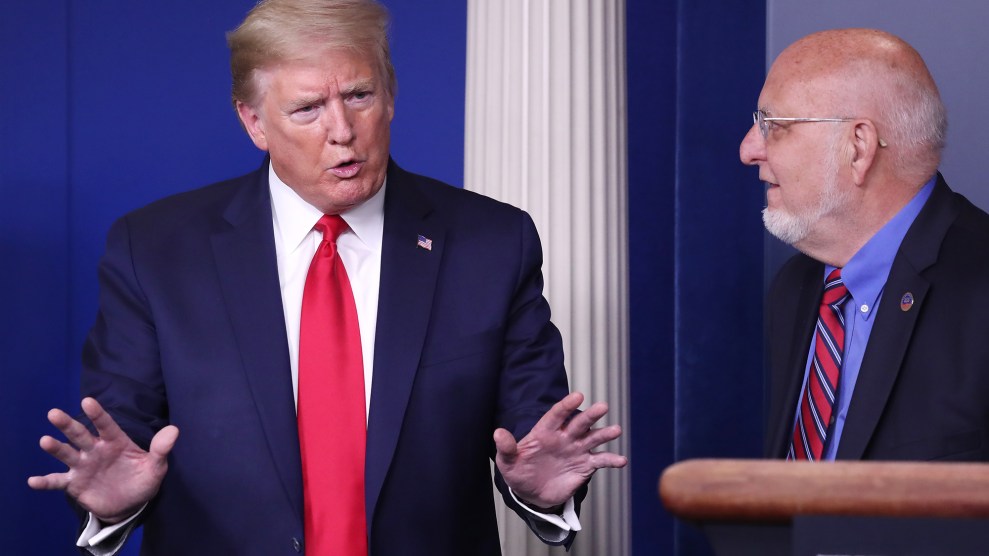 On Wednesday evening, President Donald Trump was incensed—not because of the ongoing pandemic, or, as Chris Hayes pointed out, the fact that 2,100 Americans died today, but because he felt Dr. Robert Redfield, the director of the Centers for Disease Control and Prevention, was “misquoted,” to use Trump’s words. In a Washington Post article published yesterday, Redfield warned the second wave of COVID-19 could be worse than the current wave due to it possibly coinciding with flu season.

Trump claims CDC director Redfield was "misquoted" in his comments about a second wave. He then says the quote in WaPo wasn't bad but the headline was bad. He is inviting Redfield to come up "and explain."

Sorry, to be exact, Redfield said it could be “more difficult” than the current wave, not “worse.” See the difference? Not really? Me either! But that’s the crux of the issue here: To Trump, “more difficult” does not mean anything close to “worse,” as the original Post headline paraphrased.

To be clear, Redfield did not appear to take issue with the article when it came out; he tweeted it yesterday evening, pre-Trump-tantrum.

.@CDCgov will soon issue guidance for state and local governments on how they can ease #COVID19 mitigation efforts – moving from current guidance to a phased way to support a safe reopening of America. Read more in @washingtonpost: https://t.co/bWXgznaVcF

But Trump’s plan to get Redfield to denounce the media and pour cold, cold water on the idea that there would be another severe wave of coronavirus infections pretty much backfired; Redfield explicitly admitted that he was not in fact misquoted:

6:15PM
Trump on CDC Director Redfield: "He was misquoted."

Trump just marched CDC director Redfield out to claim he was misquoted by the WaPo. But in fact, Redfield just confirmed the entire story — below — said he was quoted 100 percent accurately.https://t.co/GNnDSxWUE3

The exchange, which left me feeling more than a little dead inside, also inspired an overwhelming feeling of gratitude to The Dixie Chicks, whose new single “Gaslighter” was the tune I chose to blast just before this whole mess started. These little gatherings sometimes truly make me question my own sanity: I slacked my editor midway through Trump’s insistence that the fake news media had screwed it up yet again, and asked, “Am I stupid, what is the problem here?” She assured me that I am not stupid, and hearing Natalie Maines belt, “gasliiiiiiighter, you liiiiiar” in my head while the “briefing” continued was oddly reassuring. I highly recommend it as a White House presser amuse-bouche.

But! I’d be lucky if I could stop there. Adding insult to injury tonight, after the failed Redfield-Was-Misquoted-Let’s-Blame-the-Media Mission, the president said he disagreed with one of his loyal followers, Georgia Gov. Brian Kemp, who this week announced he’d start to reopen the state shortly. Remember, this is just days after Trump’s tweets to “LIBERATE!!!” states from stay-at-home orders.

Pres. Trump says he told Georgia Gov. Kemp "I disagree strongly with his decision to open certain facilities,” but he has to do “what he thinks is right.”

“I think spas and beauty salons and tattoo parlors and barber shops in phase one…is just too soon.” https://t.co/pWiwuM4K8k pic.twitter.com/7IRTa83PQY

Folly of trying to assign a strategy to Trump:

Less than a week later, undercuts @GovKemp something fierce

If you need me, I’ll just be over here.