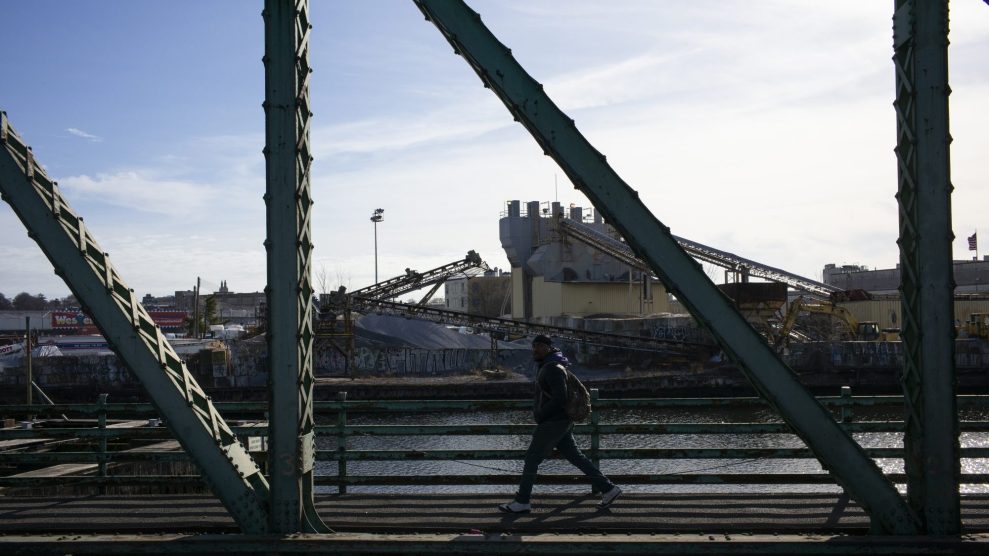 A pedestrian walks across the Grand Street Bridge that crosses the heavily polluted Newtown Creek in Maspeth, New York.Robert Nickelsberg/Getty

The city’s data shows that a higher volume of cases are concentrated in neighborhoods with more environmental health hazards, according to Rachel Spector, director of the environmental justice program at New York Lawyers for the Public Interest, a nonprofit civil rights law firm. Major arterial highways, waste transfer facilities, power plants, and other polluting infrastructure create daily air quality challenges for residents of these neighborhoods—challenges that can take a cumulative toll on residents’ health, leading them to become more vulnerable in the face of a respiratory illness.

Three zip codes in Queens, for instance, have seen roughly 30 documented COVID-19 cases per thousand residents, which is double the citywide average. These neighborhoods—among them Astoria Heights, East Elmhurst, and Jackson Heights—are criss crossed by traffic-clogged highways like Interstate 278 and the Grand Central Parkway. Nearby sources of fine particulate matter—or PM 2.5, a pollutant particularly harmful to respiratory health—include LaGuardia Airport and several of the city’s power plants.

“It’s a classic environmental justice issue,” Spector told Grist. “You have a concentration of polluting infrastructure located in black and brown communities that are often high-poverty neighborhoods—people living in poor and crowded housing conditions, who continue to work and take public transportation because many of them are low-wage essential workers. So they’re disproportionately and continuously exposed.”

The coronavirus is not the only thing they’re exposed to, Spector added. Many of these communities disproportionately experience underlying health conditions as a result of years of chronic exposure to air pollution. The South Bronx, a predominantly low-income neighborhood of color, sees an annual average of 11 to 13 micrograms per cubic meter of fine particulate matter, compared to the World Health Organization’s air quality guideline of 10. The same area sees the city’s highest rate of emergency care visits for asthma as well as respiratory hospitalizations. It has also been among the neighborhoods hardest hit by COVID-19.

“The coronavirus is exposing the inequities that have been around for so long in our society,” Spector said.

The link between coronavirus deaths and pollution exposure is coming into focus. Earlier this month, Harvard researchers released a nationwide study that links long-term exposure to air pollution to increases in the exposed area’s COVID-19 death rate. They found that every additional microgram of PM 2.5 per cubic meter is associated with a 15 percent increase in the death rate from COVID-19.

Nevertheless, the EPA announced last week that it will not tighten or change the nation’s ambient air quality standards. Democratic lawmakers subsequently sent a letter to EPA Administrator Andrew Wheeler criticizing the decision. The senators cited evidence that air pollution in the form of fine particulate matter is detrimental to human health and could increase COVID-19 vulnerability, using New York City as an example.

Spector says that the areas hardest hit by the coronavirus—parts of Brooklyn, Queens, and the Bronx—also face acute challenges posed by particulate matter pollution. Although levels of PM 2.5 across the city aren’t as bad as those in areas near large-scale oil, gas, and chemical infrastructure, the EPA’s Environmental Justice Screening and mapping tool indicates that these New York City neighborhoods still have higher risks of cancer and respiratory illnesses from inhaling diesel emissions—conditions that could make them more vulnerable to severe COVID-19 complications.

Priya Mulgaonkar, a resiliency planner for the NYC Environmental Justice Alliance, co-wrote a 2016 report that analyzes the impact of truck traffic on the city’s air quality and the communities that host waste transfer facilities. One of the report’s key findings is that commercial waste trucks accounted for a significant amount of truck traffic, worsening the air quality of nearby communities, particularly in the South Bronx. These same communities ended up being among the hardest hit by COVID-19.