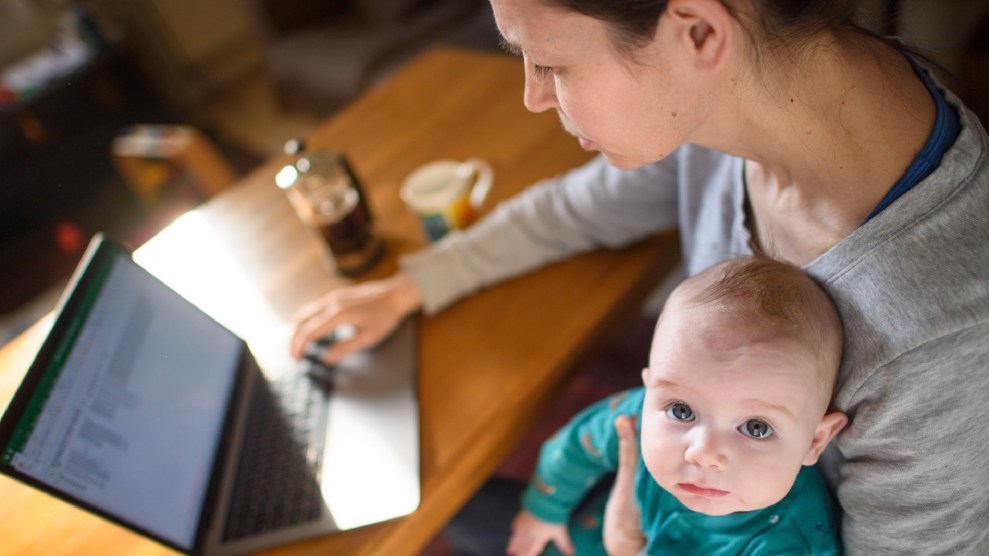 Just three weeks ago, when Melanie and her husband welcomed their new daughter into the world, it was impossible to imagine how dramatically and quickly all they took for granted would change. At the hospital, while she recovered, her parents, who live just an hour away from her northern Virginia home, watched her 2-year-old son. All four grandparents met at the hospital to welcome their new granddaughter. Then, just one week later she had to turn her in-laws away from a second visit, and for the last two weeks, she and her young family have been isolating in their home, leaving only for walks and supplies.

“It’s completely different” from having her first child, Melanie says. “A lot of that joy has been taken away from me.” She’s had to introduce her new baby to people through FaceTime and has taken to holding her daughter up Lion King–style for neighbors to admire from a safe distance.

Melanie and her family aren’t alone. As of this week, more than a third of the world’s population is under some form of restriction, and confirmed cases of the virus and deaths continue to rise. There are more than 738,000 confirmed cases of the coronavirus, and more than 35,000 people have died globally, with the United States leading the world in confirmed cases. In Melanie’s home state of Virginia, which has seen 1,250 cases and 27 deaths so far, Gov. Ralph Northam has joined 27 states and Washington, DC, in issuing a stay-at-home order. Virginia’s will be in effect until June 10, a few weeks before Melanie expected to have ended her maternity leave and return to her job as a software engineer.

Because her baby was due in the spring, Melanie says imagined long walks with friends. One friend, who lives around the block, also has a young son and delivered a baby girl a couple of weeks before Melanie. “We had a lot of plans to spend time together,” she says. “Get out with the other new moms and things like that. Obviously I’m not seeing her and she’s not seeing me.”

The immediate aftermath of a birth can be a joyful but often complicated time for new mothers. The demands of an infant, the physical recovery of childbirth, and a rollercoaster of hormones, even under the best of circumstances, can lead to postpartum depression, anxiety, or a sense of deep isolation. But during a global pandemic, when social distancing has become a public health requirement, new mothers are facing unexpected demands during a potentially fragile time.

“One of the major risk factors for both anxiety and depression is social isolation situations.”

Community is incredibly important for postpartum parents, says Joia Crear-Perry, an OB/GYN, and founder and CEO of the National Birth Equity Collective, an organization dedicated to ending disparities in maternal and infant care. “One of the major risk factors for both anxiety and depression is social isolation situations,” she says. Postpartum depression affects roughly one in seven women, and for low-income women the rate can be much higher. The “baby blues,” a term describing the sadness, irritability, and mood swings within 10 days of giving birth, occurs in upwards of 80 percent of all postpartum women.

“Women, after they have a child, feel like there’s so much joy and happiness around them,” says Maureen Van Niel, a reproductive psychiatrist, and president of the American Psychiatric Association’s Women’s Caucus. “So when new moms are not feeling that way themselves, they’re hesitant to tell people. So it’s very hard sometimes for people to get diagnosed with postpartum depression even when it occurs.”

Once diagnosed, however, there are plenty of treatments available, Van Niel says. Individual therapy or cognitive behavioral therapy are both options and can be accessed online. But for people with a more serious postpartum illnesses, particularly those with a prior history of mental health disorders, medication can be a helpful, low-risk, and a necessary addition to therapy. Most of the medication available for postpartum depression is safe to use while breastfeeding, Van Niel notes. “However,” she adds, “it is important that people be followed by a psychiatrist to address and follow their individual situation.“

Screening for postpartum mood disorders can be difficult at the best of times, but today, decisions that used to be straightforward aren’t any more. Both parents and physicians must decide if it’s safer to have an in-person visit or not, and this could lead to delays in treatment. Pediatricians, OB/GYNs, and psychiatrists are trained to screen for these disorders, but during remote visits, this all becomes much more difficult.

“Visits are way down across the country at pediatric practices, and that’s actually a very big problem right now in primary care,” says Sean O’Leary, a pediatrician and member of the American Academy of Pediatrics Committee on Infectious Disease. O’Leary says providers are doing their best to separate healthy families from sick families. That’s easier if their practices have different locations, but sometimes doctors see healthy infants in the morning, perform a deep clean, and then see sick infants in the afternoon. Pediatricians are also screening parents and infants for COVID-19, the disease caused by the coronavirus. O’Leary is concerned about not being able to do in-person checkups on infants, which he once used as an opportunity to screen parents for any problems they may be experiencing.

Although new research has emerged from China suggesting that children under the age of 1 may be more susceptible to the virus than older children, O’Leary says parents of infants don’t necessarily need to take precautions other than the recommended social distancing practices. “I don’t think things particularly change for them right now in most parts of the country where we’re recommending social distancing,” he says.

Many new parents have simply held off on the series of new baby visits. Melanie and her husband have adopted a wait-and-see attitude about going in for future visits, especially because their pediatrician’s office is in a hospital. She says they have been skipping their follow-up appointments but are waiting to make a decision about their appointment two months from now, when their daughter is due for vaccinations. Both mother and daughter are healthy, and while Melanie says she did experience “baby blues” after her son’s birth, it hasn’t been an issue this time. But not accessing child care for her 2-year-old, or giving family and friends an opportunity to help out, has added to an already stressful and anxious situation.

Child care for new mothers is another serious challenge. Jen Manne is a physician and infectious disease researcher in Boston who gave birth to her son 11 weeks ago. The lack of child care options has left her with a nearly impossible decision: Does she leave her newborn and his 4-year-old sister with her parents in Florida for as long as it takes for the contagion to abate, or does she take him back with her to Boston and risk not being able to access child care, or the possibility of infection? Both Manne and her husband work at a hospital, and finding someone in Boston willing to watch an infant while they work and expose themselves to two physicians at heightened risk has been an extreme challenge.

“We cry a lot. I don’t feel emotionally ready to be separated from him.”

Manne says this wasn’t what she had imagined returning from maternity leave would involve. Speaking with her friends, many of whom are also doctors and in similar situations, has been helpful. “We cry a lot,” she says. She admits that her worries about not caring for her new baby herself is not completely rational, but “I don’t feel emotionally ready to be separated from him,” she says, adding, “It still feels like a very strong bond, and I’m just grappling a lot with that.”

In addition to child care concerns, experts worry about how new restrictions on giving birth may have downstream effects on the postpartum experience for parents. Many hospitals have started permitting only essential medical personnel in the room, meaning new mothers can no longer have their partner or family with them as they give birth. “There are legitimate reasons why they’re closing these opportunities,” says Van Niel. “But that doesn’t change the fact that it will be extremely stressful for most women unexpectedly now to give birth alone without their partner or family member.” In order to have their partners there, Van Niel says, some people are opting for home birth, which carries its own risks. Birth experiences, particularly if they’re complicated, can have an affect on mental health during the postpartum period, Van Niel says. And if someone lacks emotional support during labor and delivery, that can potentially make the future more difficult.

For now, Melanie is trying to keep her spirits up by staying busy with her 2-year-old and splitting the care of her children with her husband. “This is really putting into perspective a lot of things that are just so easy to take for granted,” she says. “Just going out for breakfast on the weekend, or picking up coffee, or going to a friend’s house for playdates…Just the little things like seeing friends is going to be so much sweeter.”