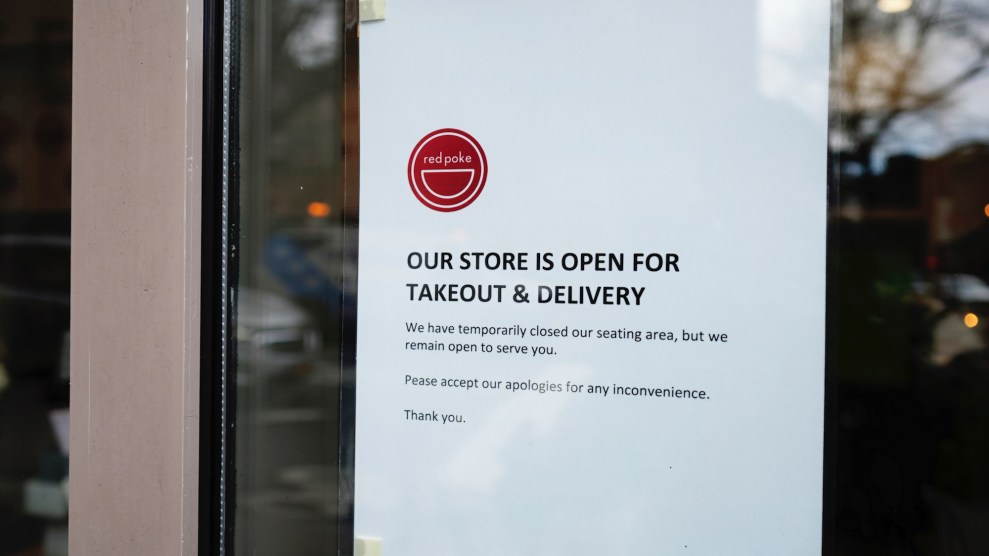 John Nacion/Image of Sport via AP

My favorite neighborhood restaurant is effectively closed down right now, and there’s a good chance yours is, too. As an increasing number of cities and states issue shelter-in-place orders, many of these places—now legally limited to serving take-out—have made the difficult decision to suspend business altogether, citing the financially impossible combination of hefty overhead and slow sales. In many cases, that’s also meant full layoffs of their staffs.

As a human being with a heart, it’s been difficult to accept that the smiling faces of servers, bartenders, and baristas who greeted me several times a week have been replaced by furrowed brows as the newly unemployed imagine a long stretch with no paycheck—and the owners of these establishments face the prospect of financial ruin. My support for my favorite places has been limited to what’s felt like meager attempts to keep them afloat: buying gift cards for future visits and contributing to GoFundMe pots set up to benefit the workers. In the case of my neighborhood joint, I’ve also been buying up stashes of the extra coffee beans they’re selling off and baked goods they’re occasionally churning out from their kitchen.

This week, the Senate passed an emergency relief bill that included $349 billion in loans to small businesses; any amount spent on payroll, rent, or utilities would be converted into grants that do not need to be repaid. That seemed like a welcome stopgap for places like the restaurants I frequented in a pre-pandemic life. But when I went to place one of those ad-hoc bakery orders today, I was met with this protest:

Small independent businesses are the backbone of our economy and the lifeblood of our nation — but we are buckling under the pressure of the COVID-19 health crisis. It turns out that #sizematters under the crushing weight of this pandemic’s economic fallout, and small businesses need help now. But the question is, who needs that support most desperately – the Big Mac or the Small Fry? The Keeping Workers Paid + Employed Act (a section of the COVID-19 stimulus bill) was originally intended to support small independent businesses. Amidst deadlock and partisan disputes, last-minute legislative changes opened up federal funding to larger franchisees — the big businesses that are newly qualified will take more than half of the allocated support provided. Masquerading these franchisees as small businesses will pull the rug out from under independent bars and restaurants. This bill is headed to the House — at this point, we need to focus on our employees and how we can function with 8-weeks of payroll support. Now is the time to organize and more clearly define the needs of actual small independent businesses. These types of restaurants are uniquely valuable to our communities and our economy, but we are among the most vulnerable in this public health crisis. As independent voices we barely register a blip on the radar, but speaking with one voice we will show our leaders that #sizematters. To get involved, slide into our DM with your email address so that we can get you the tools you need to make an impact.

The post takes aim at a section of the bill that allows big restaurant and hotel chains to take advantage of the small business relief money for any of their individual hotels and restaurants that have fewer than 500 employees. Critics argued that these big chains will take more than half of the allocated funds, leaving many smaller businesses without the cash they need to stay afloat. “Masquerading these franchisees as small businesses will pull the rug out from under independent bars and restaurants,” the post says, inviting followers to speak out against this loophole.

Other restaurants across Washington, DC, where I live, posted identical messages. When I asked one of the restaurants where the image had originated, they directed me to the DC Hospitality Coalition, whose ally organizations in Philadelphia, Chicago, San Francisco, Seattle, and New York had posted the same thing. (I reached out to the DC group; I haven’t yet received a response.)

An earlier version of the legislation had reserved the whole pot for independently owned small businesses, but Senate Majority Leader Mitch McConnell (R-Ky.) and Sen. Marco Rubio (R-Fla.) slid in the provision allowing restaurant and hotel chains could qualify. So a pot of money that was supposed to support more than 30 million small businesses and their nearly 60 million employees—which, by the way, is almost half of the entire US workforce—will now be split with companies like McDonalds, which took in a record $100 billion in sales and returned more than $8 billion to shareholders through stock buybacks and dividends last year.

To be fair, the issue is complicated. Many of the name-brand hotel and restaurant locations that will benefit from the loophole aren’t actually owned by multinational corporations but are instead run by franchisees. But couldn’t companies like McDonalds make those franchise owners and their employees whole without the help of the American taxpayer? Seems like the kind of thing that the $25 billion McDonalds doled out to shareholders over the last three years would have been good for.

On Friday, the Democratic-run House passed the Senate bill on a voice vote. Some of the House’s most liberal lawmakers—often the staunchest defenders of the little guy—have said they hope to fix some of these problems in a future relief bill they promise is in the works. (The Senate has adjourned until at least April 20, and the House is not in session, making the timing of another round of relief unclear.)

I selfishly miss spending my evenings sitting at the counter sipping coffee or a glass of wine, soaking in the twee aesthetic and fermentation-heavy menu seemingly plucked from the imagination of a Bon Appetit-reading, farmers market-buying millennial like myself. When my favorite spot reopens, I plan on holding court there to make up for lost time. But the question is, will it and others like it even be able to come back? It is an absolute insult that big corporations are cutting small businesses’ place in line.