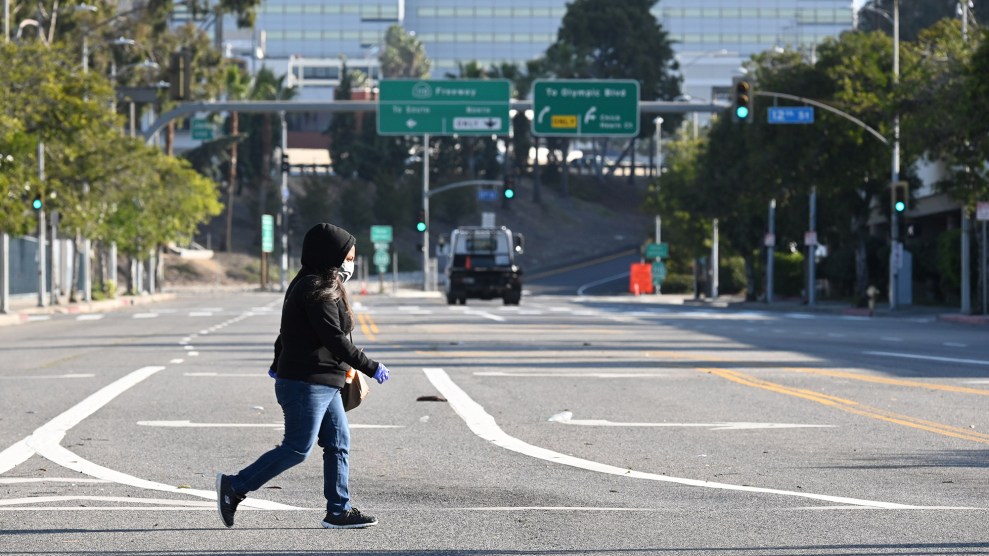 A woman wears a mask as she crosses an empty street near the Los Angeles Convention Center on Monday.ROBYN BECK/AFP via Getty Images

In recent weeks, Los Angeles has surpassed the San Francisco Bay Area as California’s coronavirus hub. The city is also host to one of the country’s largest undocumented populations, and doctors there are already seeing families hesitant to seek medical attention because of their immigration status—putting those residents and the rest of the population further at risk.

“The fear is palpable, and our patients are very, very afraid,” said Jim Mangia, the CEO of St. John’s Well Child & Family Center, an LA-based network of clinics that he said serves more undocumented patients than any other provider in the country. On top of responding to the public health crisis, Mangia said in a press call Tuesday, St. John’s employees are having to constantly reassure patients that they can safely see doctors.

St. John’s clinics across Los Angeles serve more than 100,000 patients every year, but right now they barely have enough protective equipment to last through the weekend. Mangia told reporters that, by the end of the week, St. John’s will have run out of masks, and that the organization is scrambling to purchase more from factories in China. So far, almost 900 of its patients have been sent to an isolation tent set up to treat possible cases of COVID-19. The organization has been working with county and state officials, but the problem has been with the federal government, Mangia said. As for tests, St. John’s has only about 30 left, and they don’t know when more will arrive. “The president is saying there are plenty of tests out there, but of course we know that’s not true,” he said, adding that last week 39 tests were administered, and 7 came back positive.

About 30,000 of St. John’s patients are undocumented, according to Mangia, “so we are a trusted resource.” There are so many questions coming in from the community that its phone lines are inundated with calls. Even still, Mangia added, “it’s a constant battle to overcome the latest attack by the administration on the immigrant community.”

While there hasn’t been ICE activity in the area recently, there are constant rumors, he said. A few weeks ago before the pandemic hit Los Angeles, Mangia said a patient came into the clinic and told others that ICE was around the corner—and everybody ran out of the exam room. In recent weeks, patients have asked for extra refills of their prescriptions and copies of their children’s medical records, in case they get deported.

“The dilemma is that we’ve recently come from a very intensive period of threats against the undocumented immigrant population in this country,” Mangia said. “We’re operating in an environment where we are constantly having to reassure patients that they can access services…and in a pandemic, it’s more difficult and more dangerous.”

The fear is such that St. John’s staff is launching an outreach effort next week to try to educate as many people as possible in South LA about how to prevent the spread of the virus and distribute hand sanitizer, but also to reassure people that they can, and should, access medical services if they feel sick. “We’ve even gone as far as training our staff to do to a human chain around our clinic sites,” Mangia said, “and to be prepared to do that should ICE show up.”