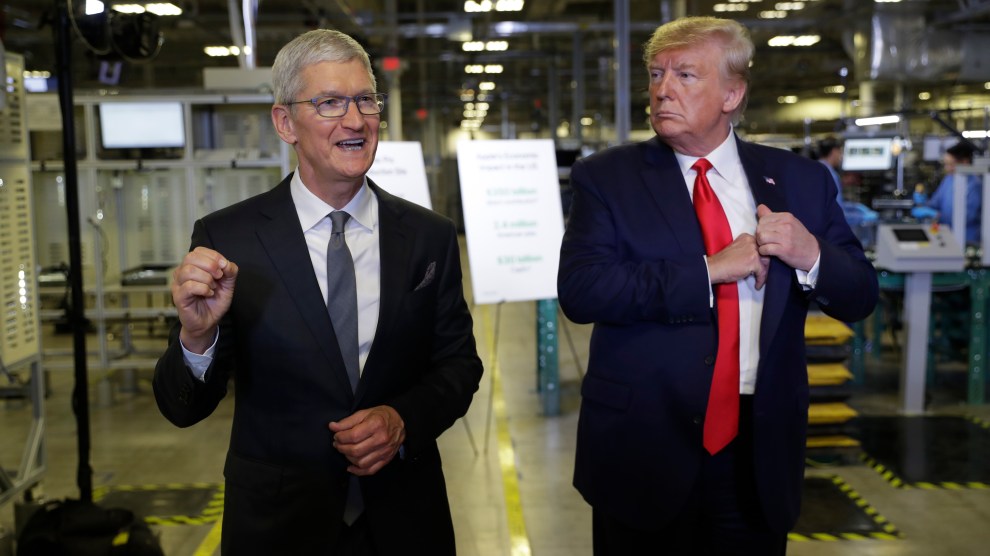 Over the last few days, major US corporations like Apple, Facebook, Goldman Sachs, and others have announced donations of hundreds of thousands, and even millions of protective masks to the government to help mitigate a massive shortage as health care workers treating patients with the coronavirus run low.

The Trump administration has praised such donations from big tech, but for many, the gifts raise an obvious question: why do all these companies have so many N95 masks lying around?

“Preparedness is expensive and only proves its value in time like these.”

A short answer is 2018’s devastating California wildfires, which were some of the deadliest and most destructive the state has ever seen. After the blazes ravaged the northern part of the state and affected the Bay Area, the state government passed a regulation requiring employers to provide masks to employees who could be exposed to wildfire smoke.

As Facebook explained to Mother Jones, it acquired the 720,000 N95 masks that it donated to the government this week because of that guideline. The company says that because almost all of its employees are working from home, they have no need for the masks.

On Tuesday, Vice President Mike Pence said that Apple would be donating 9 million masks, following Tim Cook’s tweets pledging to donate millions to be distributed to health care providers. If Pence’s number is correct, it’s unclear why Apple would have that many masks. Its Cupertino, California headquarters houses about 12,000 employees, a similar size to the roughly 15,000 employees who work out of Facebook’s nearby Menlo Park headquarters.

Apple did not return a request for comment regarding why it has roughly twelve and a half times as many masks, but the discrepancy could be explained by Apple’s overall size. Apple’s 130,000 person strong workforce is almost three times the size of Google’s 44,000, and they could have more contractors at their Cupertino headquarters than Facebook does in Menlo Park. It’s also possible that Apple has more because manufactured products are central to its business. While most Apple products are made and assembled outside of the United States by subcontractors, the company conducts research and development in the U.S. which occasionally requires “cleanrooms”—extremely sanitary areas with low levels of pollutants that provide optimal testing conditions. It’s possible that Apple uses masks to protect sensitive equipment in such facilities.

Sources inside other companies in California said that their workplaces also had stockpiles of N95 masks, other personal protective equipment, and general emergency supplies. One former corporate security employee at a large Silicon Valley tech company said that company kept water and food on hand for potential disasters.

Rich Coglianese, who has spent the last decade helping major corporations prepare for disasters by leading their enterprise resilience and crisis management teams, explained that many businesses take similar precautions.

“Apple simply has these masks because they are prepared to continue working in this scenario,” he said in an email, suggesting the stockpile could have been assembled not just for wildfires, but in anticipation of a pandemic. “This is the challenge for every organization—preparedness is expensive and only proves its value in time like these.”

“Companies typically plan for a worst-case scenario, so the algorithm Apple probably used worked out that they need this many masks,” Coglianese elaborated on a phone call. “I was working for a bank, they had thousands of surgical masks and they also had access to Tamiflu. They had doses ready for critical staff if it was needed. It’s not a question of why do you have it. They’ve gone through an extensive process of what the risk is.”

He explained that companies, in advance of potential disasters and potential supply chain shortages, factor in details about how many people will need masks and for potentially how long. “Good response is being already ready at point of disaster, not in response,” he said, explaining a key tenet of enterprise resiliency. “A pandemic is covered by most corporate resiliency plans,” he continued.