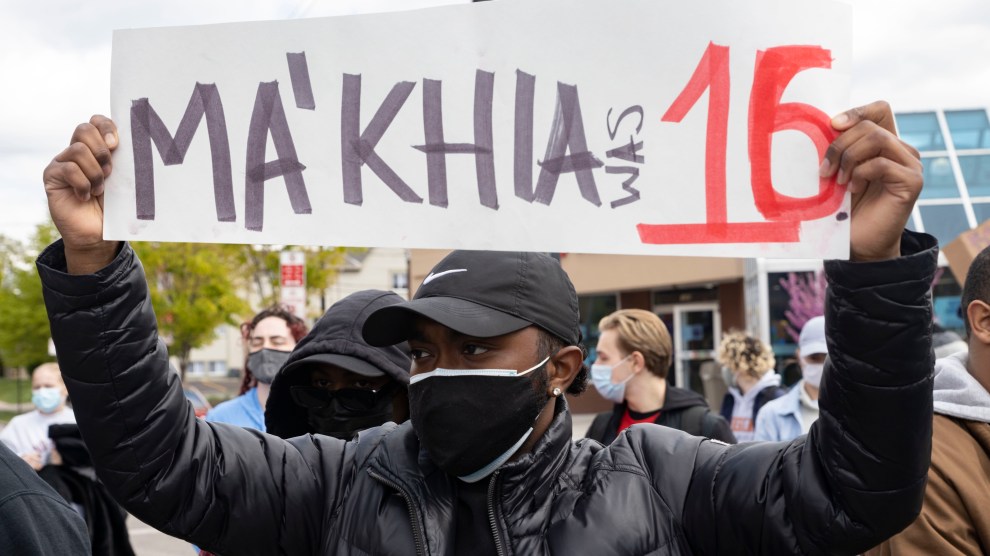 Just minutes before a Minneapolis jury convicted former officer Derek Chauvin in the murder of George Floyd, and less than a month after a Chicago police officer shot and killed 13-year-old Adam Toledo while the boy raised both hands in the air, Officer Nicholas Reardon fired his gun at Ma’Khia Bryant, a 16-year-old Black girl, outside her foster home in Columbus on Tuesday, fatally wounding her in the torso.

The odds of Reardon facing discipline seem exceedingly low. At a press conference on Wednesday, interim Police Chief Michael Woods said her death was tragic, and an investigation is ongoing. He declined to pass judgment on the specifics related to her killing, but said that police officers are legally allowed to use deadly force against someone who appears to be threatening someone else’s life. Several former police officers and policing experts echoed Woods: Reardon appeared to have followed the rules.

Black people in Columbus are five times more likely to be killed by the police than white people.

Most police officers in the Ohio city who use force on the job—even dozens and dozens and dozens of times—don’t get fired or even reprimanded, because the police department concludes they were justified in using violence. Which might help explain why we continue to see more shootings: Law enforcement officers in Columbus have taken the lives of four people in the past four months. On top of that, the city ranks third nationally for the number of children killed by police over the past several years, according to one analysis.

Officer Rearden had gone to the foster home after a 911 dispatcher reported a fight there. In body-cam footage, he fired four shots at Bryant after she appeared to lunge with a knife toward another person dressed in pink who was pinned against a car in the driveway; Bryant dropped to the ground as the bullets struck her.

“She had a knife. She just went at her,” Reardon could be heard saying to bystanders who expressed outrage at the shooting, according to the body-cam footage. “She’s a fucking kid, man!” someone standing nearby said.

In response to a question about why the officer used a gun instead of a Taser, interim Police Chief Woods said that generally speaking, police don’t use Tasers in situations where someone else’s life is threatened. He added that officers are trained to shoot “the largest part of the body available to them.” In this case, Reardon aimed for her torso. “From a training standpoint,” James Scanlan, a retired Columbus police officer, told the Washington Post, “it’s textbook.”

Even if investigators were to disagree and find that Officer Reardon violated his training when he shot Bryant, it could be hard to fire him. History tells us as much.

Samuel Sinyangwe, a New York-based data scientist who studies police brutality, crunched the numbers and found that Columbus police officers who repeatedly deploy violence are very, very rarely punished. From 2001 to 2018, a single cop in the city used force a whopping 154 times, and he only faced discipline once—not in the form of a firing, but in the form of a reprimand and counseling.

In the charts below, out of all the Columbus cops who used force at least 40 times during those years, only one of them received any kind of discipline more intense than that. That officer was Adam Coy, who was fired last year after he shot and killed Andre Hill, a 47-year-old Black man who did not have a weapon. Officers handcuffed Hill as he lay unresponsive on the ground, and nobody offered him first aid for 10 minutes after the bullets hit him. Coy now faces trial for murder.

Regardless of how much force they used, few officers were disciplined. 99% of incidents resulted in no discipline. Even for the officers with the worst records. Among officers who used the most force (40+ cases), only 1 officer was disciplined more than reprimand/counseling.(2/x) pic.twitter.com/VsZjnpwO0i

“The Columbus Police Department uses deadly force at a rate higher than the national average, and it uses deadly force in ways that are racially disparate,” says Sinyangwe. Black people in the city are five times more likely to be killed by the police than white people.

Thousands of times, people in Columbus filed formal complaints about police officers using excessive force against them, but over and over their concerns were dismissed. In fact, just 3 percent of their complaints about force were sustained between 2001 and 2017, according to an analysis by the Appeal, a national news outlet that writes about policing.

The Columbus police officer who shot and killed 13-year-old Tyre King in 2016 after the boy pulled a BB gun from his waistband did not face criminal charges, and after returning to work his bosses placed him on the narcotics team, a job that is reportedly coveted. The high number of police who are exonerated after using force suggests “there’s something wrong,” Norm Stamper, a former Seattle police chief and a national expert on police misconduct, told the Appeal. “That’s an organization that systematically tolerates abuse.”

When officers use excessive violence but aren’t disciplined afterward, they may be emboldened to continue the same behavior in the future. It’s often the same cops roughing people up: On average, just 6 percent of sworn police personnel in Columbus accounted for half of force cases annually from 2001 to 2014, according to the Appeal. (This analysis doesn’t reveal whether Officer Reardon had a history of force before shooting 16-year-old Bryant, since he didn’t join the city’s police department until 2019.)

And most of these officers keep their jobs—in part because of the protection they receive from their police unions, as I explained in a recent investigation. In Columbus and many other cities, these police unions have contracts that let officers appeal to independent arbitrators if they lose their jobs because of alleged misconduct.

More often than you might expect, arbitrators side with the cops: In Columbus, they overturned six out of nine of the police firings they looked at over the course of a decade, the Columbus Dispatch reported in 2018. One officer got his job back that year after stomping on a man who lay on the ground in handcuffs. “Even if you had a strong oversight process in Columbus, even if you had a police chief who really cared about accountability, they couldn’t discipline those officers because they would know their decisions would get overturned” by arbitrators, Sinyangwe says. “Almost no officers are disciplined for using excessive force.”

The president of the city’s police union, Keith Ferrell, expressed condolences to Bryant’s family this week. “It’s traumatic on everyone and we understand that,” he told CNN affiliate WSYX. But he added that officers must make split-second decisions to keep people safe.

It’s little consolation for Bryant’s mother, Paula Bryant, who told reporters she’s so devastated at the loss of her daughter that she’s stopped eating. The 16-year-old girl was an aspiring cosmetologist, and videos posted on TikTok show her dancing and singing along to Beyoncé while pulling her hair into pigtails. She “had a sweet little voice,” her mom told CNN. “Oh my gosh, she was just so talented. She was…on the path to going many places, definitely.”

Bryant was at least the fifth child to die at the hands of police in Columbus since 2013, according to Sinyangwe. That compares with 12 kids killed by cops in Chicago, five kids in New York, and three kids in Los Angeles, all bigger cities. And she was the fourth person killed by law enforcement in Columbus over the last four months. If these deaths are an example of “textbook” training, as experts suggested of Officer Reardon’s decision to pull the trigger, it’s a pretty damning indictment of what police are trained to do.