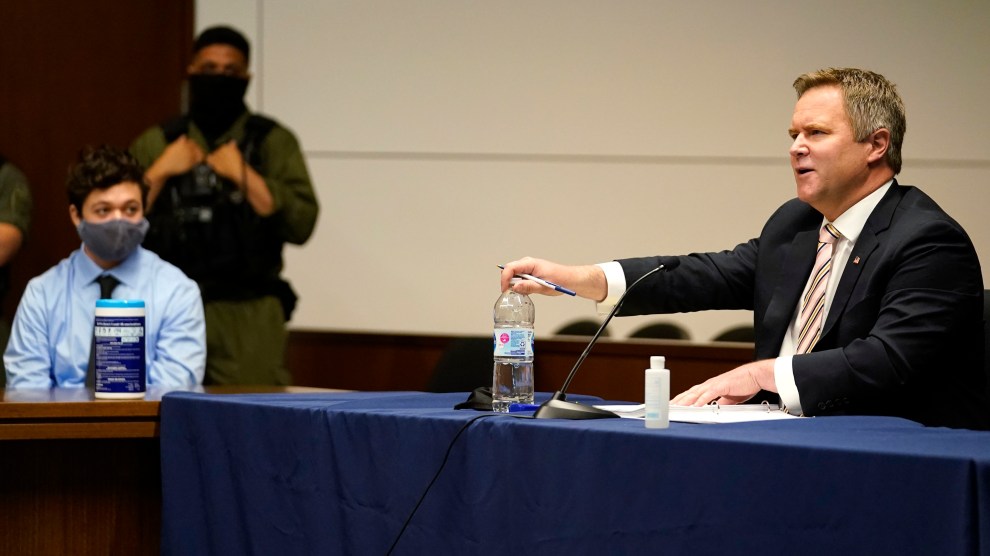 Katie Walker was reading in bed just before midnight on October 8 when she saw a strange text message on her phone. It was a student who lived in the apartment building that Walker (not her real name) had recently moved out of. He was alarmed, because two men he’d never met had knocked on his door around 9 p.m., asking for Walker. They said they were investigators but refused to identify themselves, and they proceeded to knock on just about every other door in the apartment building asking for her whereabouts. “My roomate [sic] asked to see ID and they laughed said no and walked out of the building,” the student texted her. He said the guys looked “sketchy.”

Walker sat up in bed, nervous. She wondered whether the men were white supremacists, coming after her now because of what she’d seen in August in Kenosha, Wisconsin, less than an hour’s drive from her home. She’d gone there as a medic, to help people who were tear-gassed or otherwise injured during anti-police demonstrations. During the protests, she’d spotted Kyle Rittenhouse, a white 17-year-old with an assault-style rifle. Soon after, he shot and killed two people, one of whom Walker tried to assist with medical care. He also wounded one of her fellow medics, whom she knew personally. (He says he fired in self-defense.)

After that awful night in Kenosha, Walker filed a police statement about what she’d seen near the shooting, hoping that would be the end of it: The experience left her exhausted, with post-traumatic stress disorder, and she wanted to lie low for a while and recover at home. But with the news now that two strange men were trying to track her down, she dialed the local police and left another statement. An officer jotted down that the two men had “looked scummy,” and sent someone over to the building to walk around and lock the door. Walker stayed up the rest of the night with her boyfriend, worrying, and reached out to the FBI.

The next day, her phone kept buzzing. And she wasn’t alone: The men called multiple members of Walker’s family, including her parents. It turns out these guys weren’t random white supremacists: They still refused to give their names, but, according to Walker, they mentioned they worked for the legal firm representing Rittenhouse, who now faces homicide charges. They said they wanted to take her deposition, something she’s not required to do under Wisconsin law except under very specific circumstances. One of the men also asked Walker whether she planned to give a statement to the cops about what she’d seen in Kenosha, and she said she already had. She begged them to leave her alone and hung up, but one of them called again later. Terrified, Walker reached out to John Pierce, a lead attorney for Rittenhouse. She told him about the men and asked him to make them stop.

“He didn’t deny that he sent the men; he didn’t acknowledge it either,” Walker told me recently. “All he said was, ‘I understand.'” And she prayed that he did. But the next day she received yet another phone call, from Pierce’s number, she said. When she answered it, the line was silent for a minute. She hung up, shaken, wondering whether he’d accidentally pocket-dialed her or was trying to scare her, to keep her from testifying.

Walker pulled out her computer and started doing some research. What she found did nothing to assuage her concerns. Pierce, it turns out, is no fringe attorney: His Los Angeles–based law firm, Pierce Bainbridge, had previously represented high-profile clients and several Trump supporters, including Rudy Giuliani and former Trump campaign figures George Papadopoulos and Carter Page. Because he’s based in California and not licensed to practice in Wisconsin, Pierce needed an order from a judge to represent Rittenhouse. Prosecutors have asked for a hearing to oppose that order. (They are also asking the judge to require Pierce to follow Wisconsin rules about pretrial publicity or face sanctions; they accuse him of making statements, in interviews and on Twitter, that violate rules of professional conduct, such as by commenting on the character of Rittenhouse and victims in the case, sharing information that would be inadmissible at trial, and suggesting that the prosecution is politically motivated. His comments, they say, could prejudice jurors and encourage them to acquit Rittenhouse for reasons unrelated to the law.)

What’s more, Walker found that Pierce is no stranger to menacing tactics. Walker stumbled upon a Medium post by a former Pierce Bainbridge attorney who is now suing Pierce for alleged wrongful termination. In it, she learned that Pierce is also accused of harassing his ex-wife. Mother Jones reviewed court records from a child custody case, and found that, in the course of a single day in 2019, Pierce sent his ex-wife more than 60 texts laced with violent language after she told him she couldn’t drive their son to soccer because of a work conflict: “I will bury u if I have to,” he allegedly wrote in one of the texts, copies of which were submitted to the court. “I will find u at Armaggedon [sic] and fuck u up.”

“I am good,” he wrote in another message that day. “U are evil. God is on my side.” In the texts, he repeatedly called her a “slut,” “cunt,” and “bitch,” and threatened to “hunt” her down. In one message, he mentioned a television character known for torturing terrorists: “Watch Jack Bauer on 24 if ur curious what I’m capable of.”

The next day, according to court records, Pierce apologized to his ex-wife and said he hadn’t meant what he texted her, but she remained afraid. She received a temporary restraining order against him, telling the court that he’d expressed a desire to kill her before, something he later denied.

Walker kept learning more. She connected eight days ago with Jennifer Sulkess, a Los Angeles resident who alleged that she was also intimidated by another attorney at the Pierce Bainbridge firm in a separate case. The firm had been retained to represent a Russian billionaire named Sergey Grishin, whom Sulkess had accused of harassing her and her friend, Grishin’s ex-wife, allegations he denies. The two women had taken out temporary restraining orders against Grishin, as he simultaneously pursued lawsuits against them. (These legal cases are ongoing.)

In September 2018, Sulkess said, the Pierce Bainbridge attorney instructed someone to repeatedly photograph her and Grishin’s ex-wife without their consent in public. The next month, she said, a man went to the apartment building where she had recently lived and showed the office manager there her photo, saying Sulkess was wanted for allegedly fraudulently borrowing money—accusations from Grishin’s lawsuit that she denies.

Months later, at about 8 a.m. on a Sunday, a few weeks before a restraining order trial, Sulkess pulled into the parking garage of her new apartment and found that someone else had parked in her assigned spot. “As I go to back up, I see this guy in my rearview mirror, which is quite startling,” she told me. He stood near a pillar, taking photos of her, and then approached and served her with legal papers, even though she had her own attorney who could have accepted the documents during business hours. “It was so overdramatic,” she said. “The rest of the week, you’ve got this thought in your head—like, are people going to jump out of the pillars? It’s designed for psychological warfare.” She and Grishin’s ex-wife started checking the hallways of her apartment to see if there were wiretaps.

In May, Sulkess filed a complaint with the State Bar of California about the Pierce Bainbridge attorney, Amman Khan, who has since moved to another firm but still represents Grishin. She did not mention the parking garage incident but accused him of other misconduct, including sending people to photograph her. But in June, the state bar closed Sulkess’ complaint without formally investigating the allegations. “We have determined that your complaint does not present sufficient facts to support an investigation,” wrote Scott D. Karpf, a senior trial counsel for the state bar. Pierce, his firm, and Khan did not reply to questions from Mother Jones.

Before talking with Sulkess, Walker had already filed her own complaint with the State Bar of California about Pierce and his firm. “My connection to Pierce and Bainbridge is that I am one of the witnesses in the Kyle Rittenhouse case. I believe they are harassing witnesses including myself,” she wrote. But she was disappointed to hear that Sulkess’ complaint had been closed. Now she had little hope that the agency would help her, and as far as she knew, the police and FBI hadn’t done anything to track down the men who’d gone to her old apartment building. So she agreed to speak with me. She wanted to come forward in the media, she said, because some of her friends were also witnesses the night of the Kenosha protest, and they’ve been scared off from testifying after hearing about her experience. They “saw significantly more than I did,” she told me. “And they’re afraid to go to the police and file witness statements, because they’re concerned that the same thing will happen to them.”

She added, “They’re like: ‘We might go to the police. But only if John Pierce faces some sort of consequences.'” She said none of them wanted to speak with media.

Mother Jones reviewed Walker’s complaint to the State Bar of California and her police report, and spoke with the student who texted her from her old apartment building. We also verified her real name, age, location, and corroborating reports about what she witnessed at the Kenosha protest. But we are not publishing these identifying details because of her concerns for her safety and the high-profile nature of the Rittenhouse case. The teen has become a celebrity on the right, accumulating $2 million in donations to post bond ahead of his trial. Earlier this month, people in Washington at a pro-Trump demonstration that included members of the Proud Boys, a far-right group that has advocated violence, chanted together, “Break out Kyle!” And on November 21, a lawmaker in Florida, state Rep. Anthony Sabatini, went so far as to tweet, “KYLE RITTENHOUSE FOR CONGRESS.”

Walker is taking her own precautions in the meantime. She hasn’t heard from Pierce lately, nor from the two men who went to her old apartment. But she wonders if she should arm herself anyway. “I’m not pro-gun,” she told me. “But after having a stalker in college and having this happen,” she added, referring to her experience with Rittenhouse’s case, “I was like, I want some way to defend myself.”