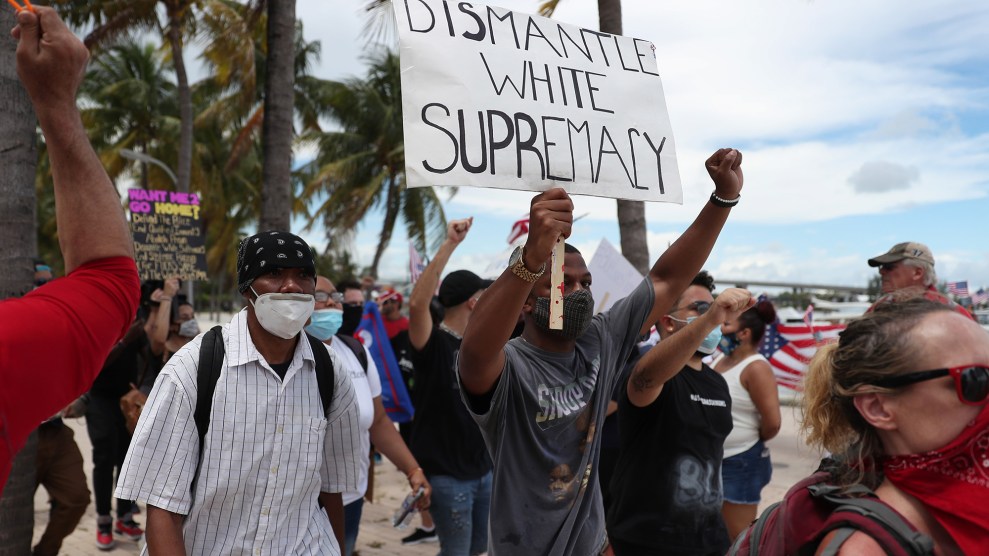 A demonstration against police brutality on June 14, 2020 in Miami.Joe Raedle/Getty

Florida Republican Gov. Ron DeSantis, a Trump lackey, is pushing legislation that would outlaw protests that turn disorderly and allow law enforcement to round up and prosecute all present, transforming participation in a protest from a protected constitutional right to a crime. The changes read like the rulebook of a dictatorship—and rather than being an aberration, represent a hot new trend on the political right.

The sweeping proposal out of Florida would allow state authorities to lock up and deny rights and benefits to anyone who attended a gathering deemed violent or disorderly. If you’re involved in an “assembly” of more than seven people where some property is damaged, you and everyone alongside you can be charged with a third degree felony. The same goes for unpermitted protests that block roadways. Drivers who murder or mow down protesters blocking roads would be given new legal defenses, as the proposal says drivers who hit protesters while fleeing are not liable for injury or death. The package would strip counties or municipalities who chose to reduce their police department budgets of state funds, essentially removing local control over spending.

Today I announced bold legislation that creates new criminal offenses and increases penalties for those who target law enforcement and participate in violent or disorderly assemblies. We will always stand with our men and women in uniform who keep our communities safe. pic.twitter.com/ITl5GmmrZJ

“This effort has one goal: silence, criminalize, and penalize Floridians who want to see justice for Black lives lost to racialized violence and brutality at the hands of law enforcement,” said Micah Kubic, executive director of the ACLU of Florida, in response to the proposal. “Protesting is, and always has been, an indispensable part of our democracy’s history. We will fight any bill that violates the First Amendment.”

DeSantis’s push didn’t come out of nowhere. President Donald Trump warned recently that any protests against him on election night would be put down as an “insurrection.” In June, as Confederate statues around the country were toppled in anti-racist protests, Trump signed an executive order directing prosecutors to charge protesters who damage federal monuments and to withhold funding from cities that do not protect monuments. His attorney general, Bill Barr, has urged federal prosecutors to charge protesters under insurrection statutes. Trump and Barr used tear gas against peaceful protesters gathered outside the White House in June, a display that signaled that even peaceful gatherings are considered unacceptable.

The introduction of this proposal just days before Floridians begin to receive ballots is widely seen as a political move by DeSantis, who admits it will only be taken up in March, when the legislature next convenes. Indeed, DeSantis himself has said he wants voters to judge politicians on the ballot this fall based on their response to his vision. “Every single person running for office in the state of Florida this year, whether you’re running for the House, whether you’re running for the Senate, you have an obligation to let the voters know where you stand on this bill,” he said Monday. “Are you going to stand with law and order and safe communities, or are you going to stand with the mob?” While Florida has not been a hub of protests this year in the way cities like Portland have been, DeSantis’s move underscores attempts by Trump to turn the November election into referendum on law and order.

DeSantis’s anti-protester wishlist doesn’t just read like a political document but also like an act of fear. In Florida, a state closely divided between Democrats and Republicans, the GOP controls all three branches of government. At the federal level, the power imbalance is starker. Republicans control the White House and Senate despite Democrats getting more votes for president and their Senate candidates, and together they are in the process of ramming through another Supreme Court appointment that will solidify conservative dominance over the nation’s highest court. In such a system, the opposition often has no outlet but protests. So it’s unsurprising that DeSantis and Trump want to shut those down too.