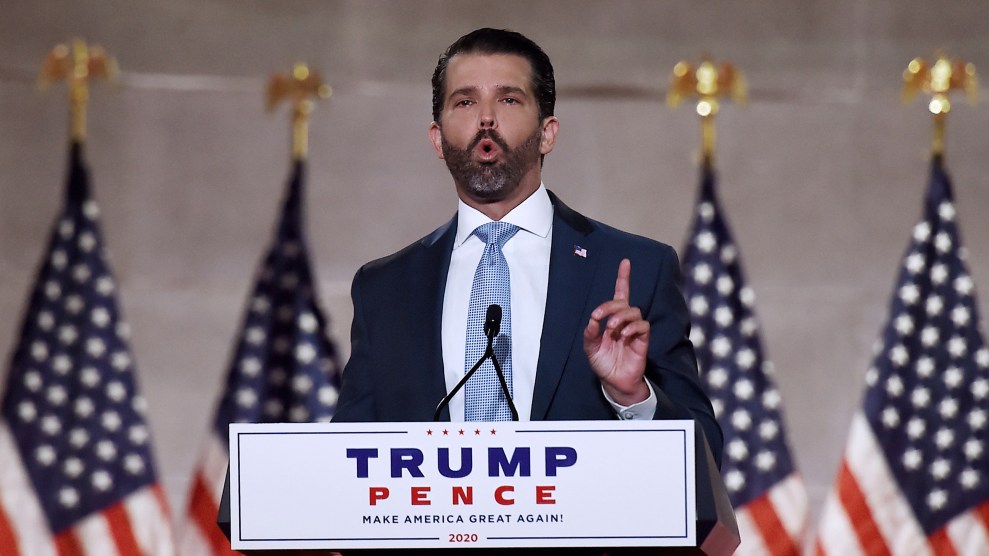 Donald Trump Jr. seems to think that the shooting by Kyle Rittenhouse, the white 17-year-old from Illinois, of three protesters last month in Kenosha, Wisconsin, is just another case of “boys will be boys.” Speaking in an interview on September 8 on the TV show Extra that has since gone viral, Don Jr. said he and his father had not condemned Rittenhouse for killing two people and injuring a third because they were still waiting for due process in the case.

He then added, “He’s a young kid. I don’t want 17-year-olds running around the street with AR-15s—maybe I wouldn’t have put myself in that situation, who knows? But we all do stupid things at 17.”

Black teens are significantly more likely than white teens to be sent to prison for the rest of their lives when they commit violence.

“That’s a little bit beyond stupid,” the interviewer, Extra correspondent Rachel Lindsay, responded. Don Jr. didn’t really take the point. “Really stupid, fine,” he said. “But we all have to let that process play out.”

Don Jr. was on the show to promote his new book, Liberal Privilege. But if we’re going to talk about privilege, let’s talk about the reasons why white teens accused of violence are so often described as boys who got a little too rowdy, but Black teens accused of violence are often regarded as predatory adults. They’re “murderers” who should be executed, as President Trump put it when referring to the now-exonerated Central Park Five in New York City back in 1989.

This kind of rhetoric trickles down into our criminal justice system and translates into vastly different punishments for kids based on the color of their skin. As I reported in an investigation a few years ago, Black teenagers are significantly more likely than white teenagers to be sent to prison for the rest of their lives when they commit violence. From 2012 to 2018, an astonishing 72 percent of teens who received life-without-parole sentences around the country were Black. Prosecutors and courts seem to believe that when these kids hurt someone, they can’t be rehabilitated and should be locked up until they die—no second chances. But when a white kid like Rittenhouse hurts someone, people like the Trumps argue he’s just young and foolish like “we all” were once. If that’s not privilege, I don’t know what else is.