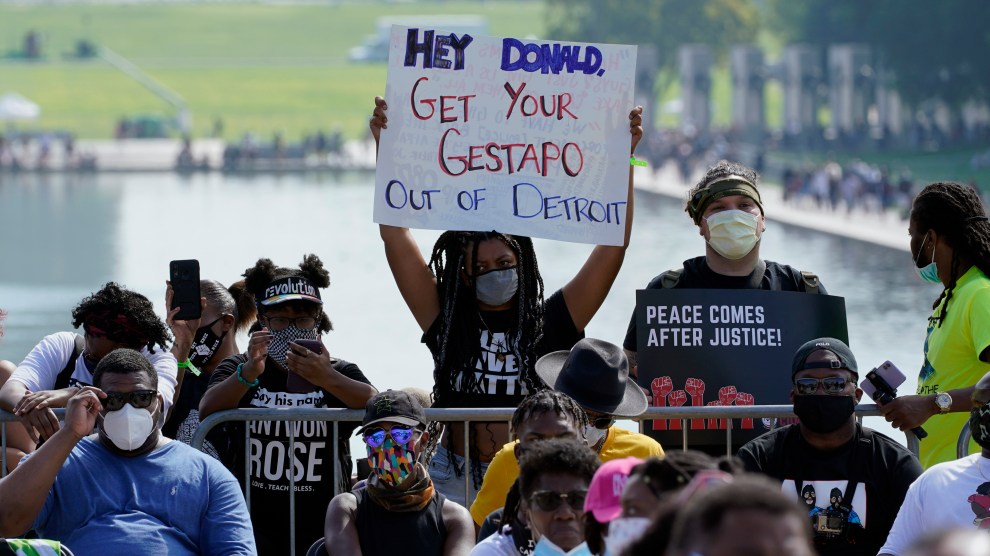 On the 57th anniversary of the March on Washington for Jobs and Freedom—and five days after police in Kenosha, Wisconsin, shot Jacob Blake four times in the back—thousands of people converged on the National Mall to demand police reform, voting rights expansion, and racial equality.

Mother Jones’ Matt Cohen is reporting live from the march, formally titled “Get Your Knee Off Our Necks.” Follow along below for updates.

After activists added their own “DEFUND THE POLICE” message to Black Lives Matter plaza, city officials covered it up. But activists are making sure the message is still loud and clear. pic.twitter.com/hFntaVM17k

Rochelle, 24, from DC held signs similar to these five years ago. “It’s disappointing to have to be hear again and again,” she says. But she has hope this moment will lead to systemic change. “Hope is all we have.” pic.twitter.com/CCDbtgxLYC

Ricardo Williams, 58, hopes his son won’t have to give his grandson the same “talk” about police that every Black parent gives their child. That’s why he came to today’s march from Florida. “It’s been over 400 years and we’re entitled to our rights as American citizens,” he says. pic.twitter.com/7JkNwmFSML

Yolanda Renee King, the 12-year-old granddaughter of Martin Luther King Jr. and Coretta Scott King, issued a poignant call to combat police brutality, climate change, and poverty. “My generation has already taken to the streets—peacefully and with masks, and socially distanced—to protest racism,” she said. “I want to ask the young people here to join me in pledging that we have only just begun to fight, and that we will be the generation that moves from ‘me’ to ‘we.’”

In powerful remarks, MLK Jr.’s only granddaughter Yolanda Renee King calls on her generation to end systemic racism, police violence, gun violence, the climate crisis, and poverty, ‘ONCE AND FOR ALL, NOW AND FOREVER’ #MarchOnWashington pic.twitter.com/FQNajWMBcE

Martin Luther King III drew a parallel between Jim Crow–era voter suppression and President Trump’s attempts to sabotage the United States Postal Service amid a pandemic that has disproportionately affected Black communities and made it dangerous to cast ballots in person. “We shouldn’t have to risk our lives to cast our votes,” he said. “We need to be able to do what President Trump does: vote safely by mail.”

Fifty-seven years after his father’s famous “I Have a Dream” speech, King called attention to continued police killings of Black Americans like George Floyd and Elijah McClain. “There’s a knee upon the neck of democracy,” he said, “and our nation can only live so long without the oxygen of freedom.”

“There’s a knee upon the neck of democracy”

Martin Luther King III demands voting transparency and warns of disenfranchisement as he demands US voters are able to vote in safety by mail https://t.co/MJDENjCrkj pic.twitter.com/uzBmpHtN8u

Masks on, socially distant protest. Quite the contrast from Trump’s illegal campaign rally at the White House last night. pic.twitter.com/Lkmtu9FmQ7

"I'm marching for George, for Breonna, for Ahmaud, for Jacob… for anyone else who lost their lives"

Barbara Hayes, 80, came from New Jersey for today’s March on Washington. Fifty-seven years ago, she came to the original March on Washington to hear Dr. Martin Luther King, Jr. speak. “It almost feels like the same thing,” she says of today’s rally. pic.twitter.com/DglVXUsYBi

Hailee, 13, from Glen Burnie, Md. holds up a sign of herself as a little girl at the 50th anniversary of the March on Washington, seven years ago. “Ever since I was a little girl i’ve been marching and it’s a shame to have to march for the same reasons again and again,” she says. pic.twitter.com/Osn3bSisa8

March is underway now and it is *massive*