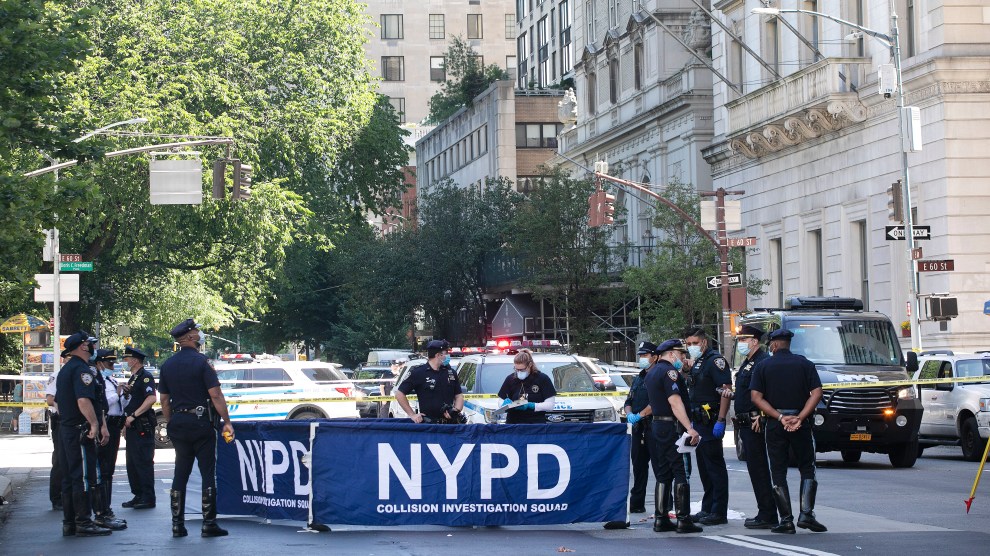 In a quest prove to the public that they have been under attack over the last several weeks, New York City police officers have spread stories that attempt to perfectly illustrate their plight. Except the stories are too perfect. So perfect that they’re not even true.

On Monday night, the New York City Patrolmen’s Benevolent Association released a statement that three officers had been poisoned by bleach-spiked milkshakes purchased at Shake Shack.

Within 12 hours, police investigators found that “there was no criminality by shake shack’s employees.”

After a thorough investigation by the NYPD’s Manhattan South investigators, it has been determined that there was no criminality by shake shack’s employees.

The tweet left two things out: that, as journalist Noah Hurowitz pointed out, the video was not from “tonight” but from May 30, two weeks earlier;  and that just moments prior to the video being shot, officers, in an incident that quickly went viral on social media, had driven into a group of peaceful protestors, threatening their lives.

This police union account is lying. This video appears to have been shot shot on May 30, a block down Flatbush from the now-infamous video of two NYPD SUVs driving thru a crowd of protesters at St. Marks and Flatbush https://t.co/pHsWt4uXjw

The falsehoods spread by New York police organizations is part of a larger pattern of police seeding bad, misleading information or outright lies, often on matters of even greater consequence, to the public. But Tuesday’s milkshake misinformation, in particular, is not the first time police have incorrectly being fixated on the threat of dairy.

In early June, NYPD put out an internal report covered by the New York Post, warning hardened concrete made to look like “chocolate chip ice cream” had been discovered at protests following the police killing of George Floyd. People on social media pointed out that the concrete, which was in cut-up espresso cups with M160, the name of a type of industrial mix, written on them, looked like samples that contractors use to test mixtures. It’s possible that someone went through the trouble of putting concrete in espresso cups and then writing the type of concrete on the outside—which, you have to agree, would undermine any “ice cream” disguise—just to throw them. But is it likely?

In August, Portland Police spread their own milk-based misinformation when they tweeted, without evidence, that Antifa protestors had thrown milkshakes that “contained quick-drying cement.” They were never able to verify this, and no one on the ground found proof. Even Fox News, who had initially run with the police misinformation, quietly retracted the claim.

Good stuff from Fox News who quietly changed its headline that amplified the hoax that antifa was throwing cement milkshakes at the Proud Boys in Portland without issuing a correction, or even acknowledging it pic.twitter.com/TxEN4H12xe