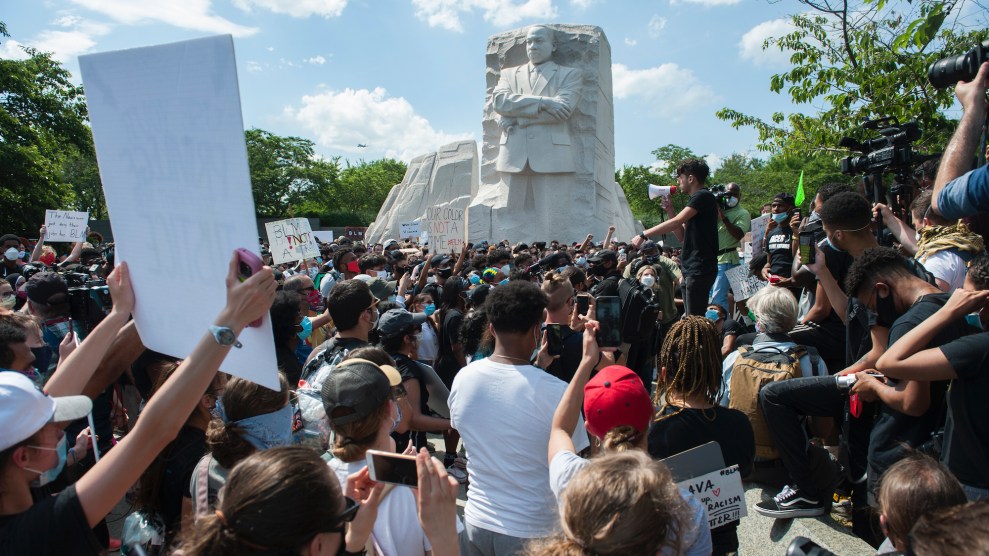 Hundreds of people take part in a protest at the Martin Luther King Memorial in Washington, DC, on June 4, 2020. Rod Lamkey Jr./Sipa via AP Images

For more than a week, Americans have been in the streets to protest the murders of George Floyd, Breonna Taylor, and Ahmaud Arbery and show no sign of slowing down. Saturday has seen massive demonstrations against police brutality and systemic racism, constant conditions facing Black Americans to which these recent killings have drawn renewed attention and outrage. The size of these crowds are all the more noteworthy since, in the midst of the coronavirus pandemic, gatherings of this size are still discouraged.

Mother Jones has reporters covering some of the protests across the country. Follow along for updates.

5:50 p.m. ET: A stunning shot of the crowds in Philadelphia.

I can only speak for what I saw, but Philly demonstrators today were kind, peaceful, and supportive. Tons of people handing out waters, snacks, masks. It was a sea of humanity but an organized one. https://t.co/INw0viZeq2

4:30 p.m. ET: Last week, our reporter Dan Friedman broke news when he noticed that federal officers standing watch over the protests bore no identifying insignia and, when asked, would not clearly identify which agency they work for. Today, Friedman is back out there asking the officers which agency they’re with. Again, the answers run the gamut.

These guys at Second and Pennsylvania told me they are from DEA though I didn’t see markings indicating that. pic.twitter.com/gwTfKzYnu7

Some are marked as “Federal Agent” but there’s nothing more specific. https://t.co/u09PfP8uJi

3:45 p.m. ET: Doctors have been on the front lines fighting the coronavirus pandemic, and many of them have been alive to the vast racial disparities in who gets and dies from the disease. In Washington, DC, reporters Matt Cohen and Dan Friedman captured a scene that’s become familiar in cities across the country: Doctors, wearing their white coats, protesting on behalf of Black lives.

3:00 p.m. ET: There are more than 10 officially announced Black Lives Matter–affiliated protests in DC today, and many of them have been making their way toward the White House. Our reporter Will Peischel is following a crowd of thousands walking from the National Mall to the White House, and another that came down Constitution Avenue.

Third large group, organized by @FFDC2020. Walking down Constitution Ave towards the WH. Took a pause and a knee for a few words on the struggle of Black cis/trans women. Crowd large enough that even two minutes in word was still getting marchers in the back, still chanting. pic.twitter.com/DUo7hKzYQW

2:00 p.m. ET: As demonstrators in Philadelphia make their way from the Museum of Art to City Hall, our reporter Dan Spinelli has captured exchanges between those marching and the police overseeing the protests. On Monday, Philadelphia police used tear gas to break up a protest on a major highway, and those in the streets today are chiding officers for the incident—tying it back to the actions of police brutality that led them to march in the first place.

As the crowd (peacefully) chants “Who polices our police?”, one man says, “Now you know how we feel!” pic.twitter.com/kUvQWJvbJt

1:45 p.m. ET: As our reporter Will Peischel wrote on Friday, protesters had rapidly spun up intricate supply chains to ensure those who attended demonstrations had access to food and water throughout the day—as well as face masks and disinfecting cloths. (We’re still in a pandemic, after all!) Those hydration and sanitation stations were still going strong when our reporter Matt Cohen spotted them this afternoon.

Can’t be overstated just how rad and inspiring it is to see so many making it a priority to support protesters. Just tons of people camped out around DC giving out hundreds and thousands of bottled water, snacks, masks, sanitizer, and other supplies. A small sampling: pic.twitter.com/kRcAojlUzN

12:45 p.m. ET: Our reporter Dan Spinelli noticed that the crowds gathered outside the Philadelphia Museum of Art didn’t have much to say about President Trump, but instead directed much of their ire toward former vice president Joe Biden, who as of last night is officially the Democratic presidential nominee. As reporter Kara Voght wrote on Friday, Biden had not done much to align himself with the Movement for Black Lives during the primary, and his work on the 1994 crime bill—which ushered in an era of mass incarceration and heavy policing—has been a source of criticism.

12:30 p.m. ET: At the newly minted Black Lives Matter Plaza—the intersection of 16th and H streets in downtown Washington, DC, and one block from the White House, where protesters have gathered over the last week—demonstrators gather to say the names of victims of police violence.

Our reporter Matt Cohen spotted Rodney Hall, a National Guard member assigned to watch over the crowds, filming the action. He said he wanted to capture the historic moment, even while he was on the job.

Noticed that some National Guardsmen were filming rally in front of the Lincoln Mem., went up and asked what was up. Rodney Hall from Mississippi said they wanted to capture history. “2020 is going to be a year of change and it’s nice to be a part of the democratic process.” pic.twitter.com/E8qHJAsm6y