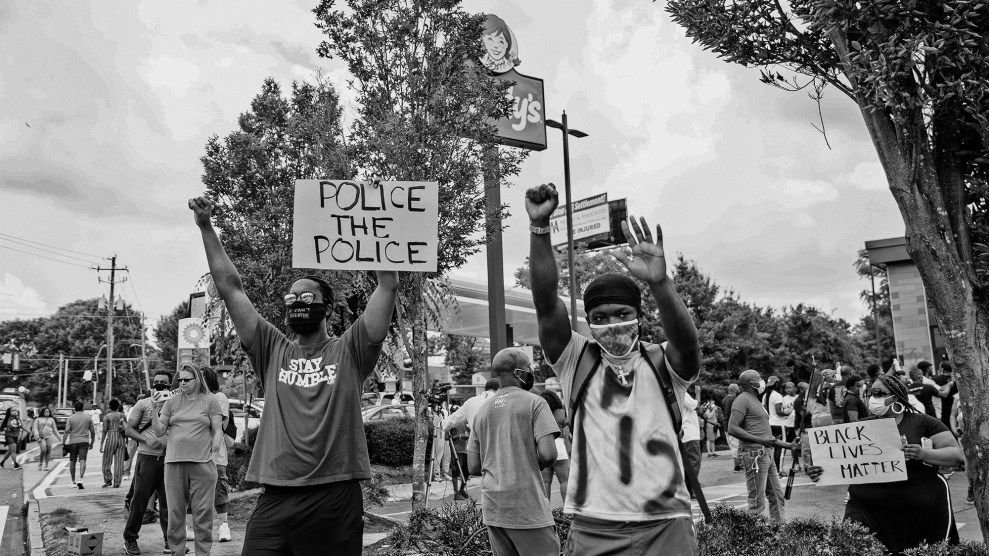 Protesters gathered last weekend at the remains of the Wendy's restaurant on University Avenue in Atlanta where police shot and killed Rayshard Brooks.Steve Eberhardt/Zuma

After spending the last decade covering America’s criminal justice system, one thing is clear to activist, journalist, and lawyer Josie Duffy Rice: a grab-bag approach to incremental policy reform isn’t going to fix all the problems with American policing. The kind of radical changes to policing that the United States needs to build safer communities and protect Black Americans? That will take a wholesale reimagining of public resources—root, and branch.

As the president of The Appeal, a non-profit news publication focused on criminal justice, and the co-host of the podcast Justice in America, Duffy Rice has been working in the weeds on issues that many Americans are now paying attention to in the wake of George Floyd’s killing—issues like police brutality, bloated police budgets, surveillance, pre-trial detention, cash bail, and the disproportionate police presence in communities of color. “The officer who killed George Floyd didn’t do that because he thought, ‘I’m allowed to kneel on his neck for 9 minutes, so I’ll only do it for 8 minutes and 46 seconds’,” said Atlanta-based Duffy Rice, in conversation with Jamilah King for this week’s edition of the Mother Jones Podcast. “It’s not going to be a policy reform that eliminates the [deaths of] future ‘George Floyds’. It’s going to be reducing the power of police, which is really only possible by reducing their budgetary power, at least in part.”

Speaking just days after the death of Rayshard Brooks, the unarmed Black man killed by police in Atlanta on Friday, Duffy Rice provided a user’s guide to the differences between a range of activists’ demands, including the definitions of defunding, divesting, and abolishing the police. She argues that, sure, shaving down police force budgets bit-by-bit is an important first step, but ultimately Americans should be working toward a total rethink of criminal justice—something that goes farther than anything that has been attempted or proposed in the United States thus far. “I think that ‘defund’ is a step on its way to ‘abolish’,” said Duffy Rice. “We’re a society that really relies on backend punishment, instead of trying to solve frontend problems.”

And, Duffy Rice notes that American policing cannot be separated from the issues of racial justice that have catapulted to the forefront of debates over the past three weeks. “It is rooted in a history of racial subjugation, of slavery, of Jim Crow, of classism and racism that is unlike anywhere else on the planet,” Duffy Rice said.

Listen to the full interview below on this week’s episode of the Mother Jones Podcast: