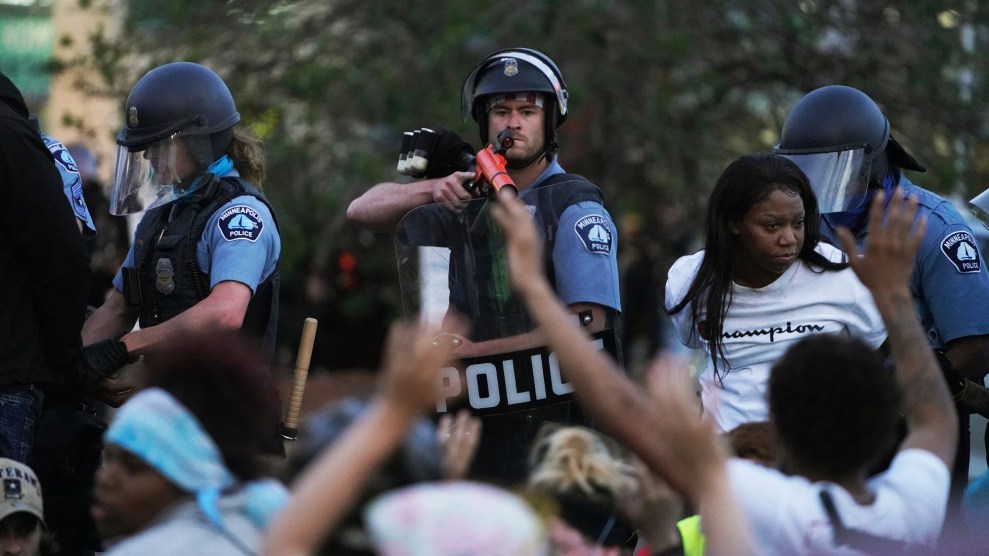 In many ways, the past couple of weeks have been exactly what the National Rifle Association has for years warned its members about: A mass mobilization of militarized police and unknown federal agents in cities across the country to shut down largely peaceful mass demonstrations of people exercising their constitutional rights—and doing so with force. In Washington, DC, for example, the President of the United States had law enforcement fire tear gas and rubber bullets at peaceful protesters for a photo op. In Buffalo, police in riot gear shoved an unarmed 75-year-old man to the ground, sending him to the hospital bleeding from the ears. In Minneapolis, where the protests started after a white police officer killed 46-year-old George Floyd on May 25, there have too many instances to count of police violently attacking peaceful protesters—and slashing people’s tires.

Surely these actions by law enforcement officers are what NRA head Wayne LaPierre warned about when he wrote in a 1995 fundraising letter that a recently signed assault weapons ban would give “jack-booted government thugs more power to take away our constitutional rights, break in our doors, destroy our property, and even injure or kill us,” right? After all, that was the NRA’s biggest fear during the Obama administration, when the group turned the former president into a liberal bogeyman, incessantly fundraising on the notion that his administration would ban all firearms. And even before that, the group capitalized off of the aftermath of Hurricane Katrina, making misleading claims that the New Orleans mayor had declared martial law and that police were disarming law-abiding gun owners to help crack down on looters. So surely the nation’s oldest gun rights organization, which has a sordid history of stoking fear among its base that Big Government is going to come and take away rights, would have a lot to say about these current instances of police crackdowns on peaceful protesters, right?

But at a moment that seems ripe for the NRA to push government fears to highlight its agenda, the organization has been utterly silent. Since May 25, the day that Floyd was killed by Derek Chauvin, the NRA’s main Twitter account has tweeted about 30 times, though not a single tweet has specifically mentioned Floyd’s murder, the subsequent nationwide protests, nor the law enforcement response. At best, the group has tweeted vague messages about its commitment to the Second Amendment, writing on June 1 that “a well regulated militia, being necessary to the security of a free state, the right of the people to keep and bear arms, shall not be infringed.” Mostly, the organization’s Twitter feed has been filled with attacks on Joe Biden, the presumptive Democratic presidential nominee, attacks on gun control groups, and celebration over the surge of gun sales in the past few months. On the website of the group’s lobbying arm, where it frequently posts its own op-eds and aggregated news articles about its activities, there similarly has been no mention of the nationwide protests over the past two weeks.

It’s a stark contrast to the NRA’s messaging in the months before Floyd’s death, when the group was firing on all cylinders to stoke fear and panic in order to drive up gun sales. As I reported in May, on social media, in videos, and in blog posts, the organization had repeatedly pushed out alarmist messages suggesting that people should be buying firearms because the pandemic would lead to a societal breakdown. In one video from March, a disabled Black woman holds an AR-15-style weapon while explaining the importance of a having a gun. “I know from history how quickly society breaks down during a crisis,” she says as the video is interspersed with footage of looting, “and we’ve never faced anything like this before, and never is a Second Amendment more important than during public unrest.” And as armed demonstrators began protesting stay-at-home orders at state capitols around the country in April and May, the NRA—in both public messaging and in statements by members of its 76-person board of directors—encouraged them.

But when it comes to the demonstrations over police brutality and systemic racism that have rocked the country in the past week, the NRA doesn’t have anything to say—largely because it doesn’t fit with its political agenda as a close ally of President Trump. Because of the pandemic and the recent wave of demonstrations, Trump’s support is waning, and he’s doing everything he can to reclaim control, calling peaceful protesters “terrorists” (whereas he tweeted support for the armed protesters who stormed the Michigan statehouse in April) and calling on state governors to “dominate” them. For Trump, his way of “dominating” protesters isn’t unlike what LaPierre’s warned NRA members about in that 1995 fundraising letter, when he worried about how President Bill Clinton would enforce the assault weapons ban. “Not too long ago, it was unthinkable for federal agents wearing Nazi bucket helmets and black storm trooper uniforms to attack law-abiding citizens,” LaPierre wrote. “In Clinton’s administration, if you have a badge, you have the government’s go-ahead to harass, intimidate, even murder law-abiding citizens.”