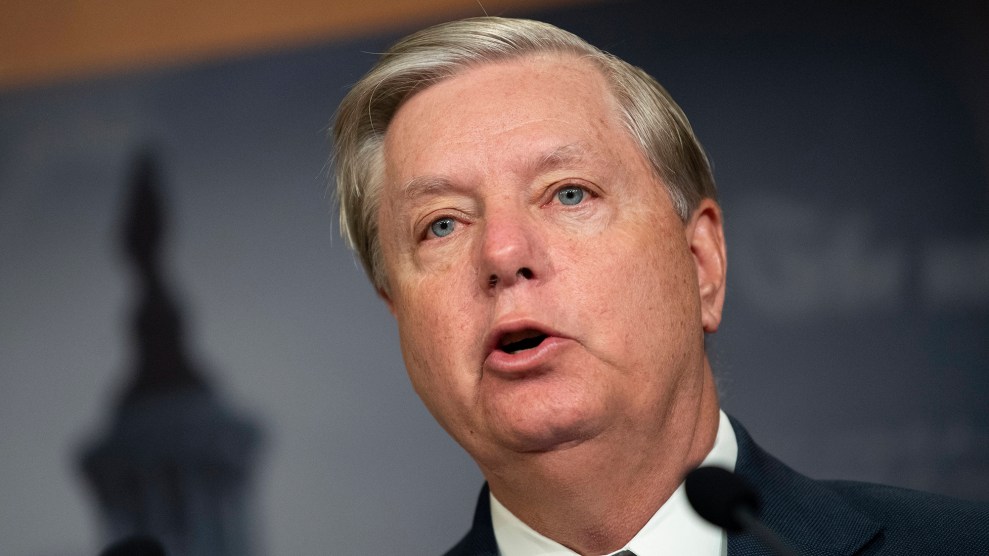 Sen. Lindsey Graham (R-S.C.) at the rollout of a GOP police reform bill.Caroline Brehman//CQ via ZUMA

On Wednesday, in the midst of nationwide protests triggered by the killing of George Floyd by Minneapolis police, Sen. Lindsey Graham (R-S.C.) accused Democrats of having failed to take up police reform during President Barack Obama’s administration.

“I’m getting a little tired of being lectured to by my Democratic colleagues, that all of this is Trump’s fault,” he told reporters at a press conference announcing a Republican police reform package. “You had eight years!”

The narrative that Obama and Democrats did nothing is not true.

President Donald Trump expressed the same sentiment on Tuesday, when he signed an executive order focused on police misconduct. “President Obama and Vice President Biden never even tried to fix this,” Trump said. “The reason they didn’t try is because they had no idea how.”

In fact, the Obama administration and Democrats—as well as some Republicans—did embrace some criminal justice reform efforts in those years. After the high-profile deaths of Michael Brown in Ferguson, Missouri, and Freddy Gray in Baltimore, Obama’s administration took steps to tackle police brutality; both those cities are now under court-monitored police reform agreements negotiated by his Justice Department. And while there was bipartisan support in Congress during Obama’s presidency for some police reforms, Republican legislators ultimately blocked the efforts in the final months of his administration, partly, as the New York Times reported, to deny him a “legacy victory.” Today, they deny that he even attempted it.

In 2015, Republican Rep. Jim Sensenbrenner of Wisconsin and Democratic Rep. Bobby Scott of Virginia unveiled a criminal justice reform plan that included incentives to adopt body cameras and provide de-escalation training. While a much more modest proposal from Sen. Chuck Grassley (R-Iowa) that lacked reforms targeting police moved forward, in 2016, as Trump ascended with the help of tough-on-crime rhetoric, Republicans backed away.

Another bipartisan criminal justice bill presented in the fall of 2016 would have kept juveniles out of adult prisons. The Juvenile Justice and Delinquency Prevention Act, which provided funding for gang-intervention programs alongside a ban on shackling pregnant girls, passed the House of Representatives with a massive bipartisan majority. But in the Senate, Arkansas Republican Tom Cotton, who recently advocated deploying military troops to violently suppress the protests, blocked it.

In 2018, under Trump, the bill finally passed, but only with a concession extracted by Cotton that judges could lock up juveniles for offenses like truancy if they violated a court order. (His home state of Arkansas does this a lot.) Just three days later, Congress passed the First Step Act, a sentencing reform law. Even as the bill permitted a few thousand inmates to leave prison, the Trump Justice Department worked to undermine the legislation and keep as many people locked up as possible.

By comparison, under Obama, the Justice Department was where the administration’s most important progress on police reform took place. As Mother Jones reported in 2017, Obama’s Justice Department “began to aggressively enforce a 1994 law that grants it the power to probe local police departments accused of racial bias, excessive force, and other civil rights violations. Its investigations led to 15 reform agreements in large cities as well as smaller communities.”

Trump’s administration was not concerned with police brutality—it even invited it.

When Jeff Sessions became attorney general in 2017, Trump’s Justice Department ceased attempts to investigate police departments and shifted its focus to rounding up and prosecuting people. Sessions required prosecutors to seek the harshest sentences possible, erasing progress toward more moderate punishments and reverting to the sorts of lengthy incarcerations that destroyed many Black and poor communities in the 1980s and 1990s. Before Trump fired him, Sessions made sure to issue guidance making the department’s de facto end to consent decrees official policy, signaling that police departments would no longer be burdened by federal oversight. Meanwhile, Trump cozied up to police unions and spoke openly about his support for excessive force. In 2017, Trump told a group officers on Long Island to go ahead and rough up suspects. The message sent, through both words and policies, was clear: The administration was not concerned with police brutality—it even invited it.

That message was received. When the head of the Minneapolis police union got on stage at a Trump rally last year, he thanked the president for unwinding police reform efforts. Trump “got rid of the Holder-Loretta Lynch regime and decided to start letting the cops do their job, put the handcuffs on the criminals instead of us,” Bob Kroll said just a few months before protests would prompt the Minneapolis City Council to begin efforts to dismantle his police department.

There are plenty of valid criticisms of Obama’s criminal justice legacy, including many lodged by activists now demonstrating in the street. It’s clear that the consent decrees his administration fought for didn’t end police brutality. And 2015 and 2016’s bipartisan attempts at reform of look meager compared to what Black Lives Matter and other activists now call for: a wholesale rethinking of law enforcement in the United States and drastically reducing the role of police.

There’s a reason today’s protesters are wary of embracing Democrats: the brutality against Black people does not abate during Democratic administrations or under Democratic reforms. While Obama fought to advance this cause, he did not champion it as aggressively as he did others.

The narrative pushed by Lindsay Graham and others that Obama and Democrats did nothing for eight years is not true. But today, it’s easier to make this false claim because Republicans either blocked their attempts, or have since dismantled their accomplishments.